Imagine New York City when the trash collectors have gone on strike: bags of garbage spilling onto the sidewalk and off the curb into the street. It’s pretty gross, and it immediately gets attention: everyone involved wants to see the problem solved quickly!

Something similar happens in cancer – and it might be a new target for treatment. Scientists Sarah Amend, Ph.D., Ken Pienta, M.D., and colleagues are very interested in a specialized type of immune cell, called an M2-like macrophage. Prostate cancer recruits these cells and makes them per- form specific tasks, including the dirty job of “efferocytosis” – eating dying cells, or basically, taking out the trash. “While we generally think of cancer as only growing and proliferating, cell death is a natural part of tumor growth,” says Amend. 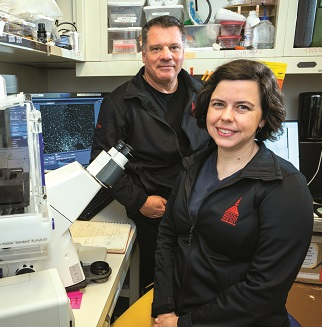 Pienta and Amend: “Keystone” cells go into stealth mode and sleep right through prostate cancer treatment. Then they wake up and are even harder to kill.

“If these dying cells are not cleared by M2-like macrophages, they will trigger an anti-tumor immune response.” In other words, when the trash piles up, the body’s immune system sends soldiers to investigate.

This specific aspect of the tumor’s “ecosystem” is a promising target for therapy – either by itself or as a means of making cancer-killing drugs more effective. “By targeting MerTK, a critical receptor for efferocytosis by macrophages, we may be able to redirect the ecosystem engineering from pro-tumor to anti-tumor,” says Amend. Graduate student Kayla Myers is the trainee leading this work, which was published in Cancer Control.

In another major focus, the Amend and Pienta lab has been studying the phenomenon of polyaneuploid cancer cells (PACCs) – which the group has dubbed “Keystone” cells, because they may hold the secret to treatment resistance in cancer. These cells have a very interesting response to cancer treatment: they sleep right through it. They go into stealth mode during the stress of treatment – like people hiding in a bunker during an air raid. Then, when the blitz is over, they emerge, “and repopulate tumors with progeny that are resistant to therapy,” says Pienta, the Donald S. Coffey Professor of Urology.

Pienta and Amend believe these Keystone cells are the major culprit in metastatic spread, cancer recurrence, therapeutic resistance, and – ultimately-lethality. “They go into a dormant state to protect DNA integrity and ensure cell survival,” says Amend. “Cancer cells in the PACC state avoid the stresses of the tumor microenvironment and the toxic effects of systemic therapy by going into cell cycle arrest.”

After treatment, PACCs wake up, and “generate now-resistant progeny that make up the bulk of cancer cells within a tumor,” says Amend. “We have found PACCs to be viable, highly active cells capable of mediating metastasis and therapy resistance.” These research projects are driven by graduate students Laurie Kostecka, Mikaela Mallin, Luke Loftus, Melvin Li, Anna Gonye, and Kevin Truskowski; and a postdoctoral fellow, Chi-Ju Kim, Ph.D. This work has been published in the Proceedings of the National Academy of Sciences USA and in Seminars in Cancer Biology.