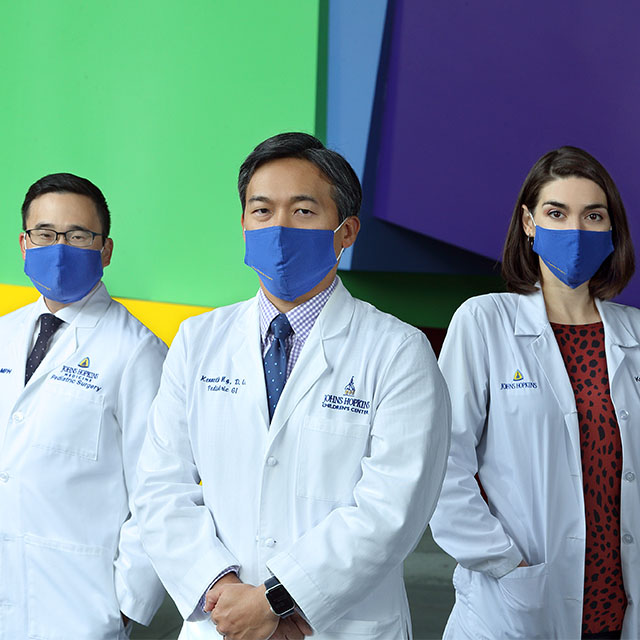 Johns Hopkins Children’s Center has been nationally recognized as an approved National Pancreas Foundation (NPF) Center of Excellence for the care and treatment of pancreatitis. The Children’s Center is one of 16 pediatric medical centers in the U.S. to receive the distinction.

The Children’s Center’s Pediatric Pancreas Center, which is overseen by pediatric gastroenterologist Kenneth Ng, opened in 2019 to diagnose and treat a variety of pancreatic conditions, including acute recurrent pancreatitis and chronic pancreatitis. The center is one of only a few academic centers in the U.S. that offer total pancreatectomy with islet autotransplantation (TPIAT), an up to 10-hour transplant procedure to alleviate the pain of young patients with a failing pancreas. Led by Ng, pediatric surgeon Daniel Rhee and pediatric endocrinologist Kristin Arcara, a team of pediatric providers and staff members from gastroenterology, surgery, endocrinology, radiology, anesthesia and critical care medicine, radiology, nutrition, social work and child life are involved in the TPIAT program.

The National Pancreas Foundation recognizes centers of excellence after a rigorous audit review to determine that an institution’s focus is on the multidisciplinary treatment of pancreatitis. The criteria include having the required expert physician specialties such as gastroenterologists, pancreas surgeons and interventional radiologists, along with more patient-focused programs such as a pain management service, psychosocial support and more.