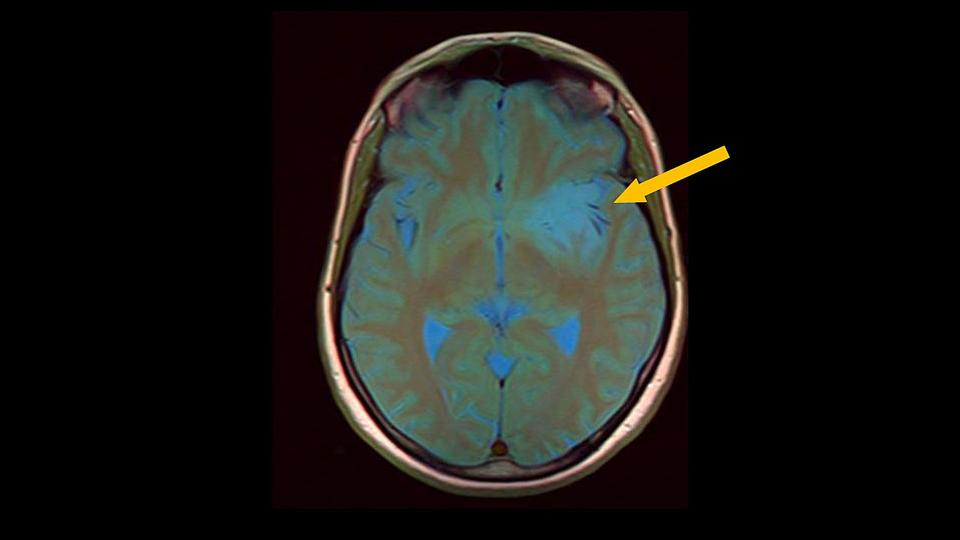 MRI false color scan showing a glioma (marked by arrow) growing in the brain. Johns Hopkins Medicine researchers have shown that mutations can prevent a proven therapy against these brain tumors from working as it should. Credit: Public domain image courtesy of Nevit Dilmen

About one-third of all brain tumors are gliomas, cancerous growths that originate in the glial cells that surround and support neurons in the brain. The prognosis for patients with gliomas is not good, with the average survival time being 12–18 months. Recent research by Johns Hopkins Medicine looked at why gliomas that have responded to one specific treatment — known as a BRAF inhibitor — sometimes become resistant to the drug and grow back.

In their study published Aug. 25, 2021, in the journal Clinical Cancer Research, Karisa Schreck, M.D., Ph.D., assistant professor of neurology, oncology and neurosurgery at the Johns Hopkins University School of Medicine, and her colleagues evaluated 15 glioma cases treated with BRAF inhibitors — drugs for attacking the BRAF gene that produces B-Raf, an enzyme that can lead to abnormal cell growth. However, the BRAF inhibitors didn’t always work as expected in all the patients studied.

“Three out of 100 glioma cases have a mutation in the BRAF gene,” says Schreck. “While we’ve seen people with this mutated gene and gliomas whose tumors shrink when they are treated with BRAF inhibitors, sometimes the drug just stops working. We wanted to find out why that happens.”

Schreck and her colleagues — including researchers Theodore Nicolaides, M.D., at NY Langone Health, and Jean Mulcahy Levy, M.D., at Children’s Hospital Colorado — found that 9 of the 15 patients with gliomas that grew back after BRAF inhibitor treatment had new mutations. The researchers hypothesized that these mutations might explain why there was resistance to the BRAF inhibitors, allowing the gliomas to grow back. They confirmed their theory with laboratory tests involving tissues and cells isolated from the patients with the mutated BRAF gene.

The researchers next tried different combinations of other targeted therapies to see if they could overcome the resistance. Some combinations did so, signaling that gliomas withstanding a specific BRAF inhibitor might be better treated with a combination of inhibitors.

“Anyone who knows someone with this type of cancer also knows it’s currently incurable,” Schreck says. “This study helped us understand what the next steps in treatments might be. It suggests that each patient’s cancer will likely need a personalized approach to therapy.”