December 8, 2021
Neeha Zaidi and colleagues use visual representations of data to demonstrate the vaccine’s ability to attack mutated KRAS genes, which are strongly associated with pancreatic cancer. These models show T cells, monocytes, lymphocytes and dendritic cells learning to recognize, fight and prevent proliferation of the KRAS-mutated gene.

Neeha Zaidi is conducting clinical trials to learn whether a vaccine she and her colleagues developed can catch pancreatic cancer in its earliest stages — or even prevent it altogether. The Johns Hopkins oncologist specializes in gastrointestinal cancers, and has set her sights on one of the most stubborn forms of the disease. Her trials will be the first ever for a preventive pancreatic cancer vaccine.

“Catching pancreatic cancer early is really key to determining whether we’ll be able treat it,” she says. “It’s frustrating that so many of the patients we see have such advanced cancers.” 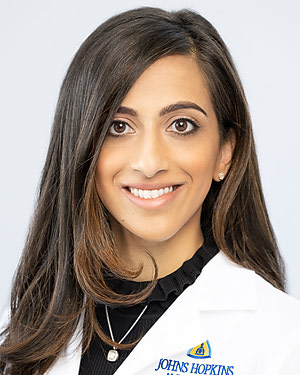 Zaidi’s vaccine uses proteins expressed by a gene mutation that is strongly associated with pancreatic cancer. A mutated version of a gene known as KRAS is present in as many as 90% of pancreatic cancer cases. The mutation, says Zaidi, nearly always appears in the early stages of the cancer’s development. For people who have a family history of the disease, screening for this mutation could make a life-or-death difference.

“The mutant form of the KRAS gene,” she says, “is one of the first to turn normal cells into precancer and then cancer.”

Zaidi’s work stems from important discoveries by Johns Hopkins researchers such as Bert Vogelstein and Elizabeth Jaffee. Vogelstein, for instance, found that precancerous lesions in the pancreas take almost 20 years to become cancerous.

“This gives us a huge window of opportunity,” says Zaidi.

Jaffee is a pioneer in the use of immune therapies to fight cancers. Her work unlocking the mysteries of interactions between T cells and pancreatic cancer earned her a 2019 election to the National Academy of Medicine. Zaidi studied with Jaffee, and is her frequent co-author on journal articles.

Although many other types of cancer stimulate strong immune reactions, Zaidi notes that one of the factors that makes pancreatic cancer so deadly is its ability to evade the body’s innate defenses.

“Pancreatic cancer is very good at hiding from us,” she says. “That’s why the majority of people diagnosed with it already have metastatic disease. By the time people notice symptoms, the cancer has spread to other parts of the body. That usually eliminates surgery as an option for treatment.”

She is collaborating with the GI division on two clinical trials of the vaccine — one trial, beginning in 2022, is planned for people who have pancreatic cancer in their close family history, and another trial is ongoing for people who have already had surgery to treat the disease.

“These are very small pilot studies,” she cautions. “But they’re exciting.”