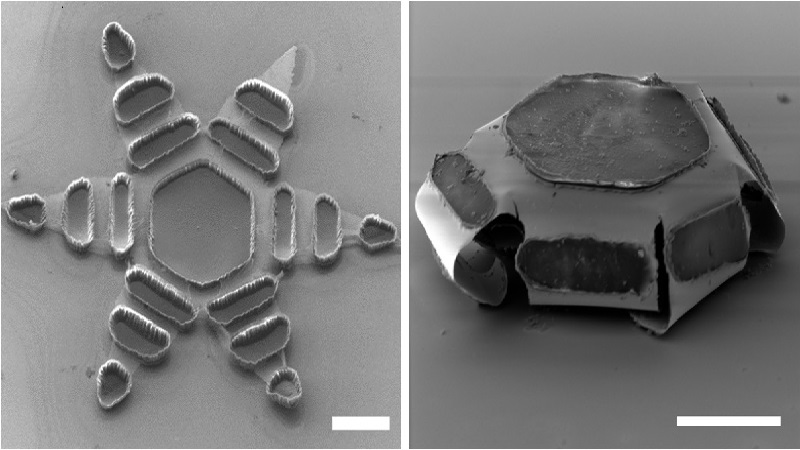 When an open theragripper, left, is exposed to internal body temperatures, it closes on the intestinal wall. In the gripper’s center is a space for a small dose of a drug. Credit: Johns Hopkins University

Inspired by a parasitic worm that digs its sharp teeth into its host’s intestines, Johns Hopkins researchers have designed tiny, star-shaped microdevices that can latch onto intestinal mucosa and release drugs into the body.

David Gracias, Ph.D., a professor in the Johns Hopkins University Whiting School of Engineering, and Johns Hopkins gastroenterologist Florin M. Selaru, M.D., director of the Johns Hopkins Inflammatory Bowel Disease Center, led a team of researchers and biomedical engineers that designed and tested shape-changing microdevices that mimic the way the parasitic hookworm affixes itself to an organism’s intestines. 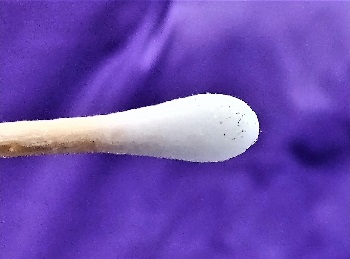 A theragripper is about the size of a speck of dust. This swab contains dozens of the tiny devices. Credit: Johns Hopkins University.

Made of metal and thin, shape-changing film and coated in a heat-sensitive paraffin wax, “theragrippers,” each roughly the size of a dust speck, potentially can carry any drug and release it gradually into the body.

The team published results of an animal study this week as the cover article in the journal Science Advances.

Gradual or extended release of a drug is a long-sought goal in medicine. Selaru explains that a problem with extended-release drugs is they often make their way entirely through the gastrointestinal tract before they’ve finished dispensing their medication.

“Normal constriction and relaxation of GI tract muscles make it impossible for extended-release drugs to stay in the intestine long enough for the patient to receive the full dose,” says Selaru, who has collaborated with Gracias for more than 10 years. “We’ve been working to solve this problem by designing these small drug carriers that can autonomously latch onto the intestinal mucosa and keep the drug load inside the GI tract for a desired duration of time.”

Thousands of theragrippers can be deployed in the GI tract. When the paraffin wax coating on the grippers reaches the temperature inside the body, the devices close autonomously and clamp onto the colonic wall. The closing action causes the tiny, six-pointed devices to dig into the mucosa and remain attached to the colon, where they are retained and release their medicine payloads gradually into the body. Eventually, the theragrippers lose their hold on the tissue and are cleared from the intestine via normal gastrointestinal muscular function.

Inspired by a parasitic worm, researchers at @HopkinsMedicine & @HopkinsEngineer team up to design “theragrippers” to deliver medicine to GI tract. Click to Tweet

Gracias notes advances in the field of biomedical engineering in recent years.

“We have seen the introduction of dynamic, microfabricated smart devices that can be controlled by electrical or chemical signals,” he says. “But these grippers are so small that batteries, antennas and other components will not fit on them.”

Theragrippers, says Gracias, don’t rely on electricity, wireless signals or external controls. “Instead, they operate like small, compressed springs with a temperature-triggered coating on the devices that releases the stored energy autonomously at body temperature.”

The Johns Hopkins researchers fabricated the devices with about 6,000 theragrippers per 3-inch silicon wafer. In their animal experiments, they loaded a pain-relieving drug onto the grippers. The researchers’ studies found that the animals into which theragrippers were administered had higher concentrates of the pain reliever in their bloodstreams than did the control group. The drug stayed in the test subjects’ systems for nearly 12 hours versus two hours in the control group.

The technology is available for licensing through Johns Hopkins Technology Ventures.

This story was updated Nov. 5 to include licensing information.