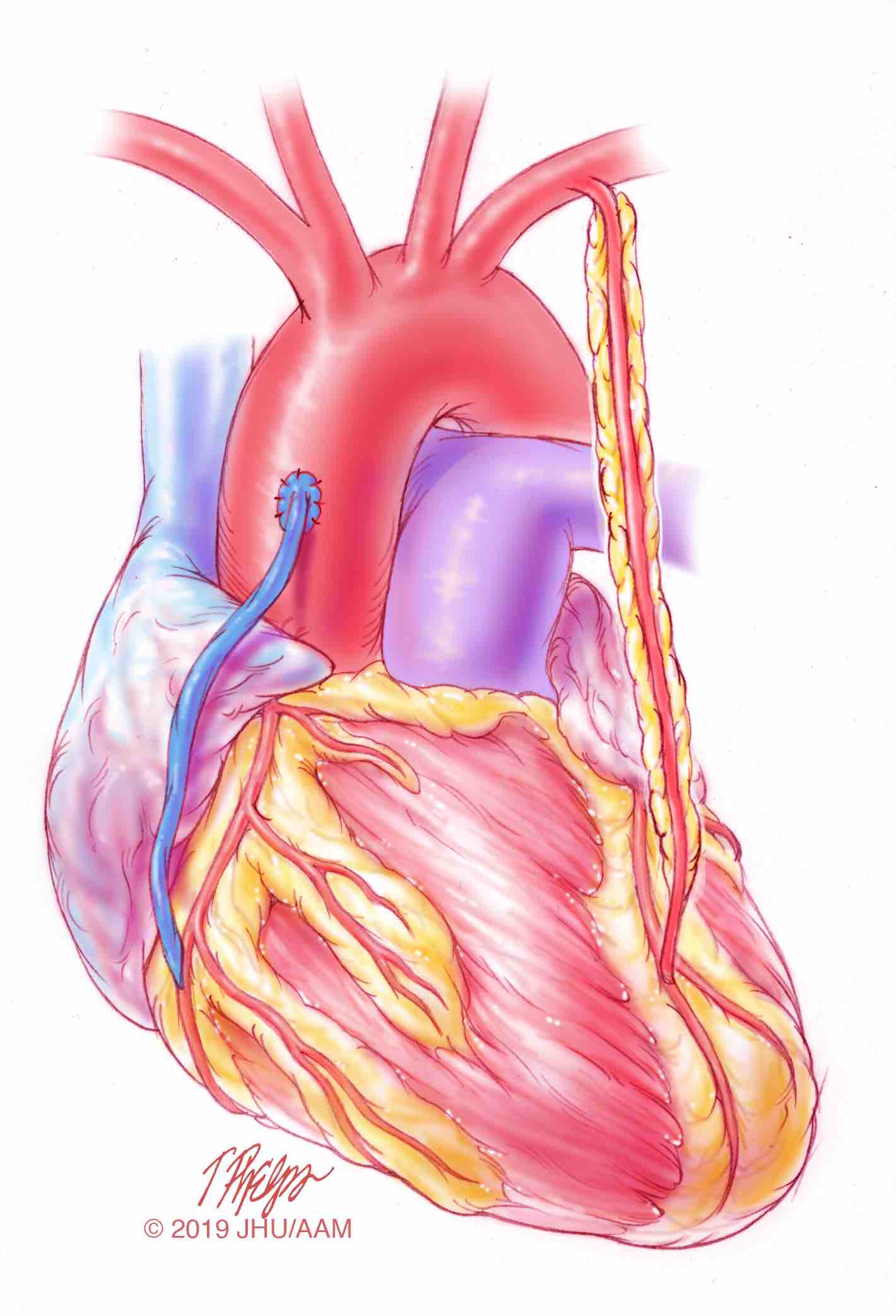 A series of interventions implemented by Johns Hopkins cardiac surgeons is resulting in notable improvements in patients’ recovery and outcomes. Among them are enhanced recovery after surgery (ERAS) protocols, early extubation in the operating room and the use of two or more arterial grafts in coronary artery bypass surgery (CABG).

Regarding ERAS, “there are certain things one can do to improve a patient’s tolerance to the stress of cardiac surgery,” says Glenn Whitman, director of the Cardiovascular Surgical Intensive Care Unit. There are preoperative steps, such as smoking cessation, prescribing iron to improve red blood cell production perioperatively, and asking patients to take in a certain amount of carbohydrates the morning of surgery, he says. There are also intraoperative methods, including reducing the amount of narcotics used during surgery, which allow patients to wake up faster and recover more quickly. And, there are postoperative steps, most notably, adding analgesics to diminish the need for narcotics, says Whitman, because opioids have detrimental effects on cognition, the GI tract and nervous system effects.

Johns Hopkins is the only Maryland hospital now routinely extubating patients in the OR as part of ERAS, says Jennifer Lawton, chief of the Division of Cardiac Surgery. “We remove the breathing tube in over 40 percent of patients undergoing an isolated CABG operation, for example. That results in a lot of wonderful things for the patient. They don’t wake up from surgery with the uncomfortable feeling of the tube in their mouth. It also mobilizes patients faster, allows them to breathe on their own and take in some liquids that first night. We believe it decreases their length of hospitalization by about half a day.”

The division is starting a multistate collaborative investigation to evaluate whether getting operating room extubations is superior to extubations occurring later, in the ICU, Whitman adds.

Additionally, surgeons have increasingly been using two arterial grafts, rather than one, in patients undergoing CABG, Lawton says. The use of one arterial graft, the left internal mammary artery, has become standard practice because it prolongs survival. “However, there have been a lot of good data that show the use of a second artery prolongs survival even more than one artery,” she says. In appropriate patients, Johns Hopkins utilizes two arteries in approximately 55 percent of patients, says Lawton, compared with about 18 percent nationally. “Not only are we giving patients a much better, longer lasting conduit, but we’re prolonging their survival. We’re giving them the most up-to-date, best operation they could have.”

The surgeons have also been employing a goal-directed perfusion initiative to reduce cardiac surgery-associated acute kidney injury, which generally complicates some 20 to 40 percent of cardiac surgery procedures. Together, the surgeons, anesthesiologists and perfusionists looked at all the factors that might stress the kidney during surgery, particularly focusing on adequate oxygen delivery during cardiopulmonary bypass, and came up with several interventions, Whitman says. These included eliminating mannitol in the pump prime, filtering cytokines out of circulation during bypass, and minimizing circuit volume, so patients do not get hemodiluted. The steps taken “virtually halved our incidence of any kind of kidney injury, from about 24 percent to approximately 10 percent,” says Whitman.

Surgeons in the division continually evaluate new methods of surgical treatment and means to improve outcomes through clinical and laboratory research, Lawton says. The first part of weekly morbidity and mortality conferences is spent discussing patient statistics and lengths of stay, as well as complications and how they can be prevented and treated optimally. The team is also looking at how to reduce blood transfusions, discharge patients to home sooner, and identify the best protocols for pain management, among other areas.

“Our motto in cardiac surgery is we CARE (we’re conscientious, accountable, respectful and engaged),” says Lawton. “We continually try to provide the best and most compassionate care we can.”