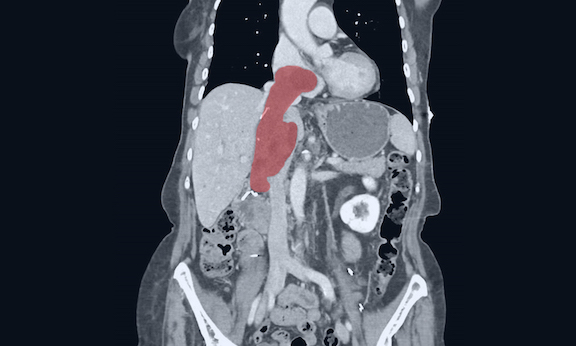 A CT image shows the mass, highlighted in red, extending from outside the vena cava where the right renal vein used to be, into and up through the cava and into the heart.

The tumor started where the patient’s right kidney had been removed about 20 years earlier at another institution. From there, it grew up the vena cava through a filter that had been inserted about 15 years ago at another facility, and the growth ended up as a softball-sized mass in her heart. Cardiac surgeon Ahmet Kilic, who first met the patient in April, brought the case to the liver tumor board to discuss the feasibility of surgery. Hepatobiliary surgeon Christopher Shubert, who has training in traditionally unresectable liver lesions, said it was doable.

Together, Kilic, Shubert and liver transplant surgeon Shane Ottmann worked to remove the tumor in one piece, then reconstruct the heart, vena cava and hepatic veins.

“This is a type of program that I want to build at Johns Hopkins, because it’s not available at most centers in the United States. Many patients and physicians don’t know this type of surgery is an option. In-situ cold perfusion, ante-situm and ex-vivo surgeries are the pinnacle of liver surgical care.” – Christopher Shubert

Prior to the operation, surgeons sought input from cardiologists and oncologist Christian Meyer, a sarcoma specialist. Because the mass was so large, a minimally invasive procedure was out of the question. There were other complicating factors. Most people who undergo ante situm procedures — or similar surgeries such as in-situ cold perfusion and ex-vivo liver resection — have two functioning kidneys, but this patient had one. Typically, patients don’t need a chest incision and aren’t put on bypass, even when the tumor extends into the heart, but this was required in this case because of the extent of the involvement of the heart and the size of the mass. Despite the risks, the team agreed that without surgery, the patient — who already was experiencing a slowed heart rate because of the tumor — otherwise was likely to die within weeks to months. The patient agreed to proceed.

From there, Kilic reconstructed the heart and attached it to a synthetic graft. Shubert and Ottmann then rebuilt the vena cava and reinserted about 40% of the patient’s original liver. They connected the patient’s veins from the remnant liver onto the synthetic graft. Blood flow to the liver was then restored, and the patient was taken off cardiopulmonary bypass support. The patient healed well with no need for other cancer treatments.

The procedure isn’t just for sarcomas, Shubert says. It also can be used for a variety of tumors or conditions involving the vena cava and hepatic veins.

Worldwide, there are maybe a handful of surgeons who perform such procedures, Shubert says, and there are few centers offering training in how to do so. “I was fortunate to have specialty training. These surgeries require skill sets from liver resection and live-donor liver implantation surgeries, and then you have to put those skill sets together. This was a great success story for the patient. She’s got another 10
to 15 years of life ahead of her now.”