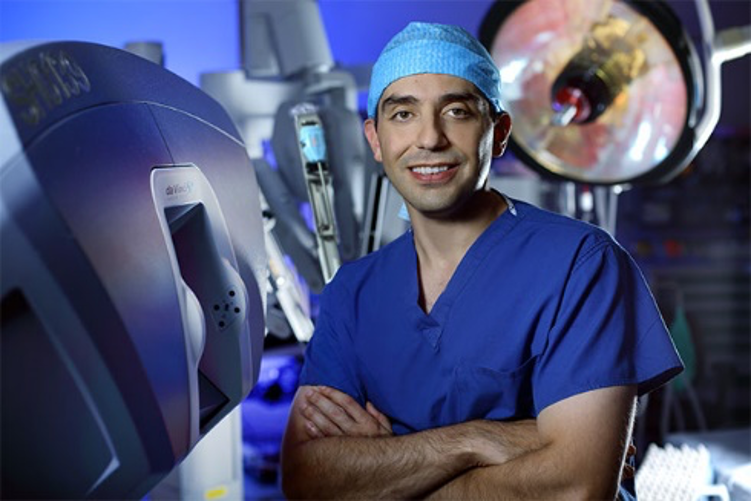 A new da Vinci robotic system involves only one small incision, near the patient’s navel. How does it compare to the standard robotic prostatectomy?

If you have had a robotic prostatectomy, you’ve got a handful of dime-sized scars around your abdomen – one for each incision, or “port” the surgeon made. This has been the standard for minimally invasive removal of the prostate, but that may be about to change. The company that makes the surgical robot, da Vinci, has introduced a single-port system. As its name suggests, this new system involves only one small incision, near the patient’s navel. How does it compare to the standard robotic approach?

To answer this question, a team led by Mohamad Allaf, M.D., the Mohamad E. Allaf Director of Minimally Invasive Urology, recently compared outcomes between 376 men who underwent the standard robotic procedure at Hopkins and 208 men who had surgery using the single-port system at Hopkins and elsewhere. Their findings were encouraging: “Overall, we found that blood loss, complication rates, and pain were similar between the two approaches,” says Mitchell Huang, a Johns Hopkins medical student and the study’s lead author. “The only significant differences were a slightly longer operating time and fewer lymph nodes removed in the single-port group, which might be due to a small learning curve in adopting the new technology.”

Of note, there was no difference in post-surgery opioid medication use between the two approaches. “A current point of emphasis in the treatment of prostate cancer is reducing opioid use by patients after surgery,” notes Hiten Patel, M.D., M.P.H., a recent graduate of the Brady residency program and current urologic oncology fellow at Loyola University. “Because minimally invasive approaches to surgery generally reduce pain, we might expect that patients who receive the single-port approach to prostate surgery would have less pain. While we didn’t see this in our study, this might be something that we will observe as surgeons gain more experience with the technology.”

The results of this study, presented virtually at this year’s American Urological Association and European Association of Urology meetings, indicate that the single-port approach is safe. “We anticipate that the single-port approach should continue to expand its usage as surgeons become familiar with the surgical system,” says Allaf. “The bigger question now is whether this new approach offers enough relative benefit over the standard robotic platform to justify the additional cost to patients with prostate cancer.”

Fighter pilots do it, and so do professional athletes: they spend hours learning and honing their muscle memory on computer simulators. Why not Urology residents?

Thanks to a generous philanthropic gift, “Johns Hopkins Urology is at the forefront of a revolution in medical education,” says Marisa Clifton, M.D., Director of the Urology Residency Program. Simulation and deliberate practice are helping the next generation of urologists tackle increasingly diverse and complex surgeries.

Clifton, in collaboration with Andrew Cohen, M.D., Director of Trauma and Reconstructive Urologic Surgery, is developing a six-year educational program that is poised to become a national standard for urologic robotic training.