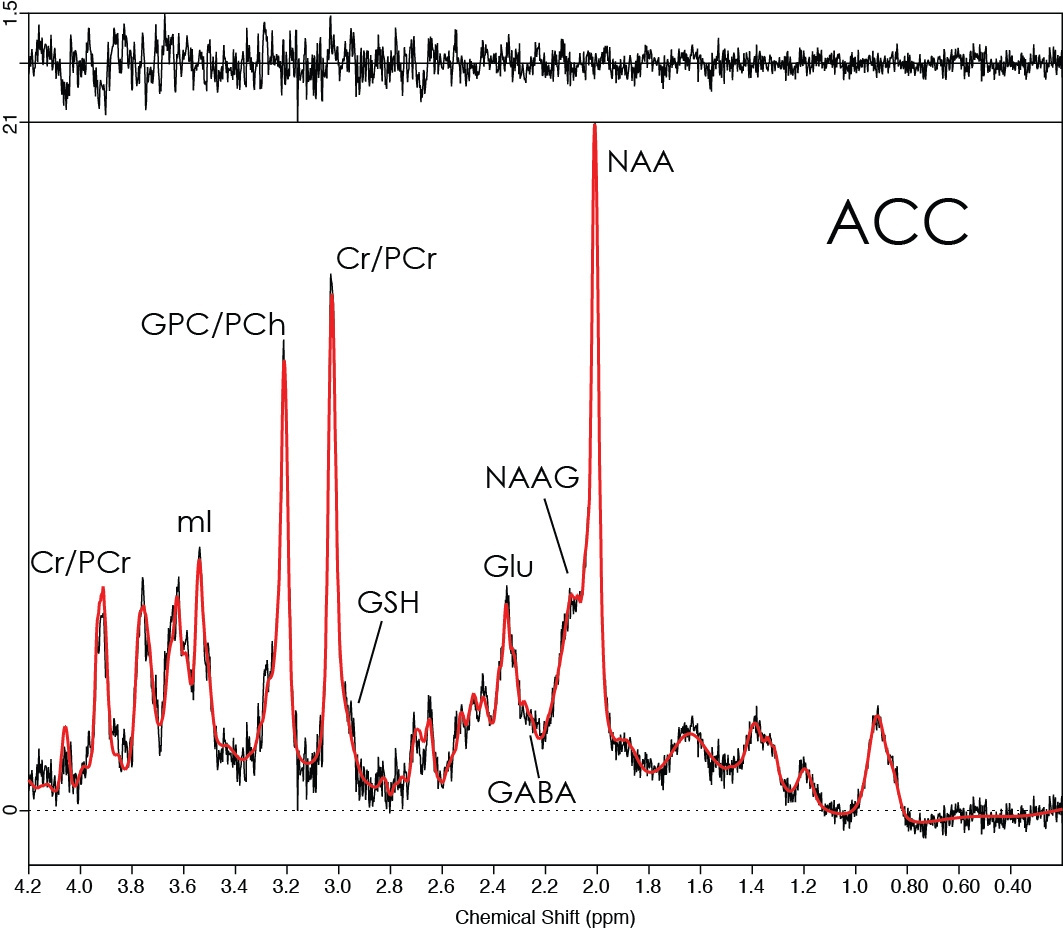 MRIs showing the brain regions scanned for this study.

Using strong and targeted but noninvasive magnets at specific sites in the brains of people with and without mild learning and memory problems, Johns Hopkins researchers report they were able to detect differences in the concentrations of brain chemicals that transmit messages between neurons. The strength of these magnetic fields allows the researchers to measure tiny amounts and compare multiple brain metabolite levels at the same time. These studies may ultimately help to reveal what initiates memory decline and may, perhaps, even predict dementia risk.

The researchers believe that measuring such data over time will allow them to more accurately detect and describe changes in metabolism in the brain as a person progresses from healthy to mild cognitive impairment and to dementia.

The findings were published in the January issue of Neurobiology of Aging.

“We hope one day to use this technology to understand the earliest changes in brain chemistry that are associated with cognitive and behavioral symptoms that could represent new targets for treatment,” says Gwenn S. Smith, Ph.D., the Richman Family Professor of Alzheimer’s and Related Diseases, Department of Psychiatry and Behavioral Sciences at the Johns Hopkins University School of Medicine and director of the Division of Geriatric Psychiatry and Neuropsychiatry. “Right now, we don’t know the biological mechanism in the brain that initiates memory impairment, and we believe that using this technique we may eventually be able to understand the chemical changes in the brain that trigger this damage, and perhaps one day intervene to prevent it.”

The researchers say they detected a decrease in two particular chemical messengers, GABA and glutamate, in people who have mild cognitive impairment, compared with those who do not have it.

Previous studies by the researchers showed that other kinds of brain imaging, notably PET scans, uniquely could detect the neurotransmitters—the brain’s chemical messengers—serotonin and dopamine. Both of these chemicals are involved in mood, memory and cognitive decline. But, each chemical measured this way requires its own PET scan.

The technology used in the new study, magnetic resonance spectroscopy (MRS), is very similar to magnetic resonance imaging (MRI), which uses strong magnetic fields and radio waves to create and project images of tissues and organs. Whereas MRI primarily measures the brain’s water, MRS has been long used to identify chemical breakdown products, or metabolites, in an unknown substance based on unique, or “signature” peaks of the substances generated in response to certain vibrations. MRS uses a combination of a strong magnet and radio waves to stimulate molecules in the brain to perform distinct, tiny tumbling movements. Computer analysis then identifies the chemical metabolites depending on where the spikes appear on a scale that ranks the chemicals by how fast the signals appear from these tumbling movements. How tall and wide the spikes are on the scale determines how much of the chemical is in the targeted brain area. 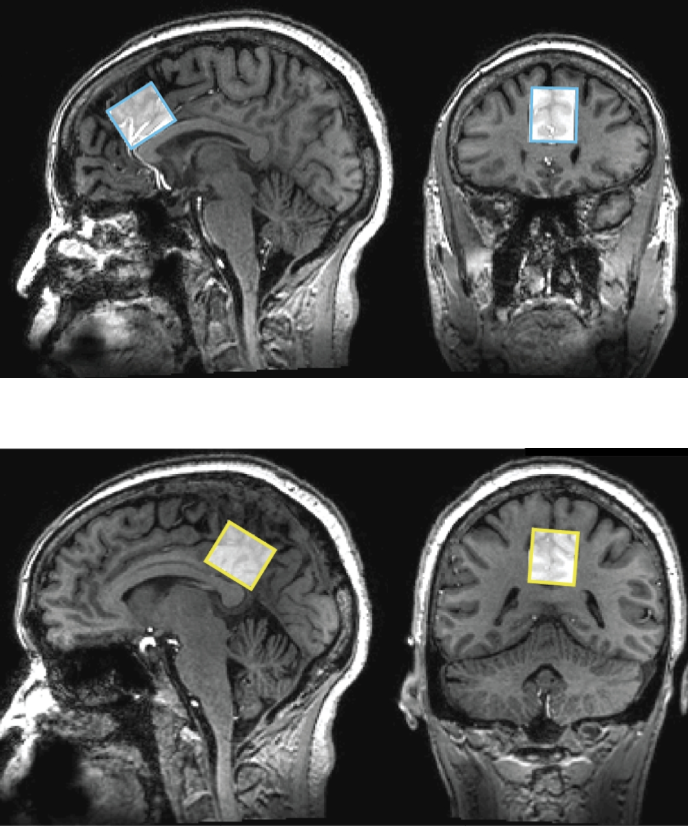 MRIs showing the brain regions scanned for this study.

When using common, clinical MRI machines, however, the researchers say, the spikes bleed into one another, and chemicals with similar structures can’t be distinguished from one another. The researchers started using a device with a more powerful magnet, known as 7-Tesla. The magnetic field strength of this machine is more than 100,000 times the strength of the magnetic field of the Earth.

“We are looking at extremely small concentrations of chemicals in the brain, with concentrations about 50,000 times lower than water—essentially the proverbial needles in a haystack,” says Georg Oeltzschner, Ph.D., postdoctoral fellow in the Russell H. Morgan Department of Radiology and Radiological Science at the Johns Hopkins University School of Medicine. “The very low signals and sensitive technology is why this technique has not been widely used to measure the signals of the chemicals we are interested in. With the strong magnet, we’re able to improve the signal and resolution decisively.”

“These different chemicals can be measured in a single scan, and complement the brain chemicals we can measure with the PET scan,” says Smith.

To confirm that the participants had mild cognitive impairment, they had to score at least one-and-a-half standard deviations below the normal range on the California Verbal Learning Test or the Brief Visuospatial Memory Test, standard tests of memory. Using a PET scan to measure the amyloid protein plaques that appear early on in the brains of people with the disease, they confirmed that each participant with mild cognitive impairment had evidence of these protein plaques.

The researchers wanted to measure neurotransmitters and brain metabolites found in parts of the brain known to show changes in people with Alzheimer’s disease: the anterior cingulate cortex and the posterior cingulate cortex. Both places fall in the part of the brain responsible for thinking and mood in the center midline that divides the brain into right and left hemispheres, with one location near the front of the head and the other near the back. Each MRS scan for a specific brain region with the 7-Tesla magnet took approximately 5–10 minutes to get sufficient resolution and signal strength of the chemical components in each of the brain locations.

The researchers identified and compared levels of the neurotransmitters GABA and glutamate, the metabolite N-acetylaspartylglutamate, the antioxidant glutathione, and the markers of neuronal health N-acetylaspartate and myo-inositol, which at higher levels indicates brain inflammation.

“This pilot study shows that we can use MRS to measure individual metabolites in the brain, and we can detect changes in brain chemicals between healthy folks and people at risk for Alzheimer’s disease,” says Smith. “Now we can gear-up to do a larger study with more people to get more meaningful results.”

Oeltzschner said he also plans to apply newly developed measurement techniques capable of measuring GABA and other low-concentration metabolites on the more common MRI machines with 3.0 Tesla strength magnets. These new techniques may enable more places to do these kinds of measurements, as 7-Tesla machines are expensive and still relatively rare.

The authors don’t have any conflicts to report.