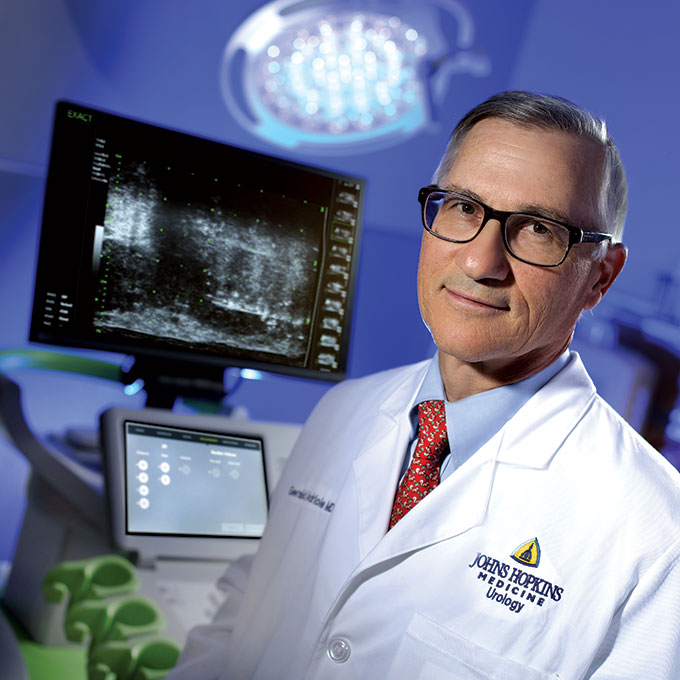 The image you’re seeing below is a prostate, and the lines on the picture are needle tracks from a prostate biopsy. This is not conventional ultrasound: it’s micro-ultrasound (microUS), and its high-resolution images provide 300 percent improved clarity over conventional ultrasound. This is a new tool being studied and used by Gerald Andriole Jr., M.D., Professor and Director of Urology in the National Capital Region of the Brady Urological Institute. It was provided through the generosity of philanthropists Sandra and Larry Small and is available at Sibley Memorial Hospital.

MicroUS can be used along with MRI in a fusion biopsy or on its own in an ultrasound-guided biopsy, says Andriole. “Conventional ultrasound runs at 6 to 9 MHz, but this runs at 29 MHz. You see a lot more, down to the level of 70 microns” – the width of a human hair! Andriole is one of the lead investigators in the ongoing OPTIMUM trial, comparing microUS-guided biopsy on its own, MRI fusion biopsy, and MRI combined with microUS. “OPTIMUM will determine whether microUS can be used as an alternative to MRI/ultrasound fusion biopsy.” MRI is expensive and cumbersome, is not universally available, and is variable, depending on the age and strength of the MRI machine. MicroUS-guided biopsy can be done right in the urologist’s office, with results available in real time. Brady urologist Christian Pavlovich, M.D., who was the first to use microUS for the prostate, is getting this updated version of microUS as well, and is the Principal Investigator of the OPTIMUM trial at Johns Hopkins.

The Brady is proud to welcome Andriole to our faculty. He is a nationally recognized clinician and scientist who has made major contributions to the field of prostate cancer screening and treatment. Andriole comes to the Brady from Washington University in St. Louis, where he was the Robert K. Royce Distinguished Professor of Surgery and Chair of Urology. This new position allows him to be closer to his wife, Dorothy, who is the Senior Director of Medical Education Research at the Association of American Medical Colleges in D.C. It is also a homecoming: “It’s sort of full circle for us,” he says. “We were both fellows at the National Cancer Institute in the 1980s, and here we are again!”

Andriole: The OPTIMUM trial “will determine whether microUS can be used as an alternative to MRI/ultrasound fusion biopsy.””
Refer a Patient
International Patient Services
Sign Up for the Clinical Connection E-Newsletter
High-Value Health Care
Learn how we’re improving care and cutting costs for patients
Learn More
Find a Doctor
Stay Up to Date
CME Resources
Back to Top