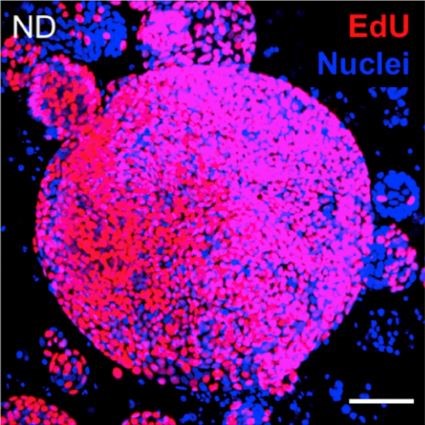 A look into the DNA of dividing cells in a human duodenal enteroid.

Along with his Johns Hopkins gastroentrology colleagues Julie In and Jennifer Foulke-Abel, Mark Donowitz is working on finding treatments for diarrheal diseases that infect millions of people and kill hundreds of thousands of children around the world every year.

Using “mini-intestines” they cultivate from patient biopsies and surgical specimens, the researchers study the way diarrheal diseases like cholera, shigella and even travelers diarrhea attack their hosts.

Early work in growing human intestine tissue models, known as enteroids, yielded spherical or other solid shapes. Donowitz’s laboratory was among the first to grow the enteroids in flat sheets, allowing a realistic simulation of the conditions of the lumen.

“It’s more like the way the gut actually works,” says Donowitz. “This way, it’s much easier to access and observe the epithelial cells, which is where the bacteria are.”

Donowitz points to a recent example of a collaboration with a drug developer that engineered a drug to inhibit a protein implicated in diarrhea. He says that, when the mini intestines were exposed to the new drug, researchers saw that the chloride channel known as CFTR was blocked, interrupting the chain of reactions that trigger diarrhea. Donowitz believes the drug, which he says is in the early stages of development by a pharmaceutical company, could be significant.

“We’re in a field where we’re still using drugs that were established thousands of years ago. It’d be nice to make some advances,” Donowitz says. “You never know, but this could be the first antidiarrheal drug since the days of Hippocrates.”

Researcher In is using enteroids to explore ways that colon tissue regenerates after severe diarrheal disease. She says that her research is pointing to a universal system of regeneration, no matter the origin of the damage. The process of cell regeneration after enterohemorrhagic E. coli (ETEC), she says, looks similar to the process after an inflammatory bowel disease flare-up.

Discover the latest research that holds hope for patients with diarrheal disease. With “mini-intestines,” researchers can study the way diarrheal diseases attack their hosts. Click to Tweet

“It’s very exciting,” says In, adding that, if proven, the discovery has implications for future treatment of inflammatory diseases like Crohn’s and colitis, as well as for pathogen infections. “There’s evidence that regeneration after diarrheal disease has very similar pathways to regeneration after other inflammatory conditions.”

Donowitz says that, while his hypothesis is unproven, human enteroids appear to provide a better research model than mouse intestine or colon cancer cells.

“Ninety percent of drugs that are developed based on mouse intestine and colon cancer cell lines fail for safety or efficacy reasons,” he says. “The view of the group that’s funding our research is that if you study normal humans, you have a better chance at success.”

Foulke-Abel says her research illustrates Donowitz’s point. Using an epithelial-only culture to study a toxin present in both ETEC and cholera, “we’re not seeing the same type of signaling that’s being observed in mice.”

As Foulke-Abel’s research team dug deeper into the comparisons of the two bacteria, she says enteroids provided insights that animal testing could not. They’re beginning to study cocultures of epithelium and nerves, following a longstanding suspicion that about half of diarrheas have a neuronal component.

“It’s looking more and more like humans have different signaling pathways than mice,” Foulke-Abel says. “The enteroid model has really helped us take a huge step forward, in terms of understanding how these diseases affect people.”

In addition to research of global bacterial diseases, Donowitz says human enteroids hold potential in the burgeoning field of personalized medicine. Since enteroids are grown from tissue taken during biopsies or surgeries, they retain the characteristics of the patient from whom they were taken.

“If the person has a genetic disease of some sort, we can study the specifics of the disease on a personalized medicine level,” says Donowitz. “That’s a really important aspect of working with enteroids.”