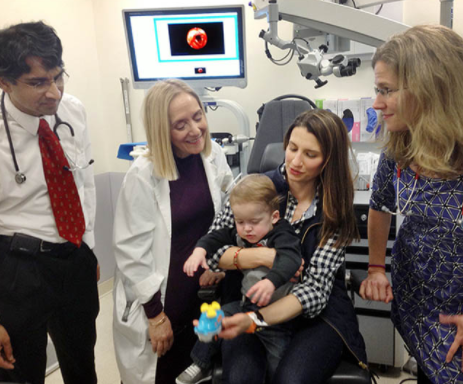 Born with long gap esophageal atresia, a rare birth defect in which part of the child’s esophagus is missing, Gregory Aurilio was cared for over a span of 242 days in the neonatal ICU at the Johns Hopkins Children’s Center. Before Gregory’s discharge, his parents knew that he would need the ongoing care of several pediatric subspecialists due to the complexity of his condition. They were somewhat daunted by the prospects of making multiple visits to multiple physicians, but then they learned about a special clinic for patients like Gregory with all of the subspecialists they would need under one roof.

“One of the beauties of the clinic is that you can make one appointment and see multiple doctors at one visit,” says Gregory’s mom, Chrystie Aurilio. “As a parent you feel good that everyone is on the same page in his care and making collective decisions in moving forward.”

Aurilio was referring to the Johns Hopkins Children’s Center’s Aerodigestive Clinic, where a gastroenterologist, otolaryngologist, pulmonologist, and speech-language pathologist together see patients with complex disease that may have both respiratory and digestive components. In the absence of such a multidisciplinary clinic, says speech language pathologist Maureen Lefton-Greif, individual specialists tend to order procedures and treat patients in silos, with little coordination and input from one another, a piece-meal approach that can lead to frustrating and sometimes critical delays in diagnosis and treatment.

“We all hold clinic together, review the child’s history, and discuss what the patient needs in terms of evaluation and what each of us might bring to the table for this patient,” says Lefton-Greif. “It’s truly an interdisciplinary model that allows us to determine the best next steps in terms of diagnostics and therapeutic options for these patients.”

“It may be a longer journey going from subspecialist to subspecialist before finding someone who can diagnose the problem,” adds pediatric pulmonologist Michael Collaco. “Our collaborative, comprehensive approach shortens the journey.”

Examples of difficult-to-diagnose cases that have arrived at the clinic, Collaco says, include upper and lower airway infections and anatomic abnormalities that may be contributing to chronic cough or persistent bronchitis. Collaco cites the case of a 4-year-old patient previously diagnosed with asthma whose chronic cough persisted, despite multiple visits to his pediatrician and referrals to a pulmonologist. Chest X-rays were inconclusive, and he had not responded to standard asthma care or courses of antibiotics for suspected bronchitis or sinusitis.

“There’s usually more than one pathologic process going on outside the bubble of asthma related symptoms, perhaps some reflux or dysphagia,” Collaco says. “What he needed was a more comprehensive global consultation where subspecialists think about how different aspects of a disease fit together.”

In another case, following a pediatric gastroenterologist’s endoscopic examination of a patient’s esophagus, pediatric otolaryngologist Margaret Skinner, using a bronchoscope, detected a small laryngotracheosophageal cleft, an extremely rare and often easy-to-miss midline opening along the larynx, trachea and esophagus. Skinner describes the defect as a notch in the wall between the esophagus and trachea, through which liquids can pass.

“We are in a circle where none of us individually could manage the condition optimally,” says Skinner. “I need the gastroenterologist’s help before I can fix the cleft, and the pulmonologist needs my help before he can improve the airway problems. It really is a collaborative effort.”

In addition to offering a swift and accurate diagnosis, the clinic reduces health care costs because fewer clinic visits are required and operative procedures can be combined. For instance, these three procedures can be performed in one procedure: esophagogastroduodenoscopy to examine the lining of the esophagus, stomach and the first part of the small intestine; rigid bronchoscopy to examine the upper airway; and flexible bronchoscopy for the lower airway.

“Not all patients require three procedures but we can combine them in the OR and reduce both the number of times the child requires anesthesia and the associated costs,” says Collaco. “There is also a reduction in what families pay in copays and facility fees, and the time they take off from work.”

Other benefits, Collaco adds, include fewer medications and a more enjoyable feeding experience for patients like Gregory.