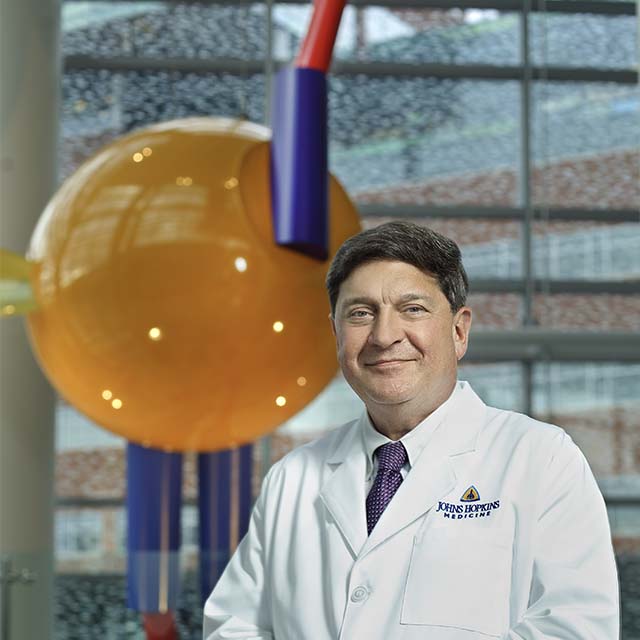 Director of the Division of Pediatric Neurosurgery Alan Cohen

To say desmoplastic infantile ganglioglioma (DIG) is rare would be a huge understatement. In 2011, there were only 60 cases cited in the medical literature, or in pediatric neurosurgeon Alan Cohen's words, “Less than one-tenth of 1 percent all tumors of the central nervous system.” He should know. Patients with DIGs have found their way to him as one of the leading specialists in diagnosing and treating these tricky but generally benign tumors that afflict young children and mimic other more lethal lesions.

“I call it the great masquerader because it can look like a malignant brain tumor that carries a terrible prognosis,” says Cohen. “In fact, these patients most often can be cured.”

Cohen cited three memorable cases that illuminate the diagnostic challenges of DIG tumors. One was an 8-month-old boy who suffered focal seizures his first week of life. Doctors suspected a stroke after CT scans revealed what appeared to be a hemorrhagic mass. Treatment with phenobarbital improved his seizures but the mass persisted and led to the patient’s referral to Cohen. He ordered an MRI that suggested a neoplasm, followed by an operation to remove the tumor that proved to be a DIG.

“It had mimicked a stroke, but if no one thought about the possibility of a tumor it would have continued to grow,” says Cohen. “It was a very big mass that we took out. Now, at age 15, he’s tumor free and doing well.”

In another case diagnosed prenatally at a Florida hospital as a giant left hemisphere malignant brain tumor, Cohen notes that the family was advised to have the child admitted to hospice care and to make funeral arrangements following the infant’s birth. Surprisingly, the newborn’s condition did not worsen over the next two months.

“Our feeling was she didn’t deteriorate, so before giving her a death sentence why not take a look and see what it is,” says Cohen. “We opened the dura and took out the large tumor, which a biopsy confirmed was a DIG. Today this 4-year-old is thriving at home with no evidence of tumor.”

In yet another case that came Cohen’s way, a previously healthy 9-month-old girl suffered significant shaking of her left arm and leg for 30 minutes, all captured on her mom’s cell phone video. At an outside hospital, the child’s white blood cell count and other lab tests were markedly abnormal, suggesting an infection. Perhaps a brain abscess had prompted the focal seizure, doctors thought. However, the child’s MRI revealed a large tumor in the right hemisphere, a possible malignant sarcoma. Cohen recommended surgery.

“We made an incision, opened the brain – which was quite swollen – and debulked a portion of the tumor,” says Cohen. “Pathology revealed a DIG, a benign tumor, so we stabilized the child and went in a second time and took the rest of it out. The patient is home now, tumor free and doing well.”

Cohen adds that pathologists at Johns Hopkins analyze DIGs and other tumors for molecular markers to help develop targeted therapies, should they ever recur.  His take-home message?

“A desmoplastic infantile ganglioglioma usually has an excellent prognosis, but if you don’t think about it in your differential diagnosis, you may treat the patient incorrectly,” says Cohen.  “When treating an infant with a large brain tumor, think BIG.  When the imaging doesn’t make sense, think DIG.”