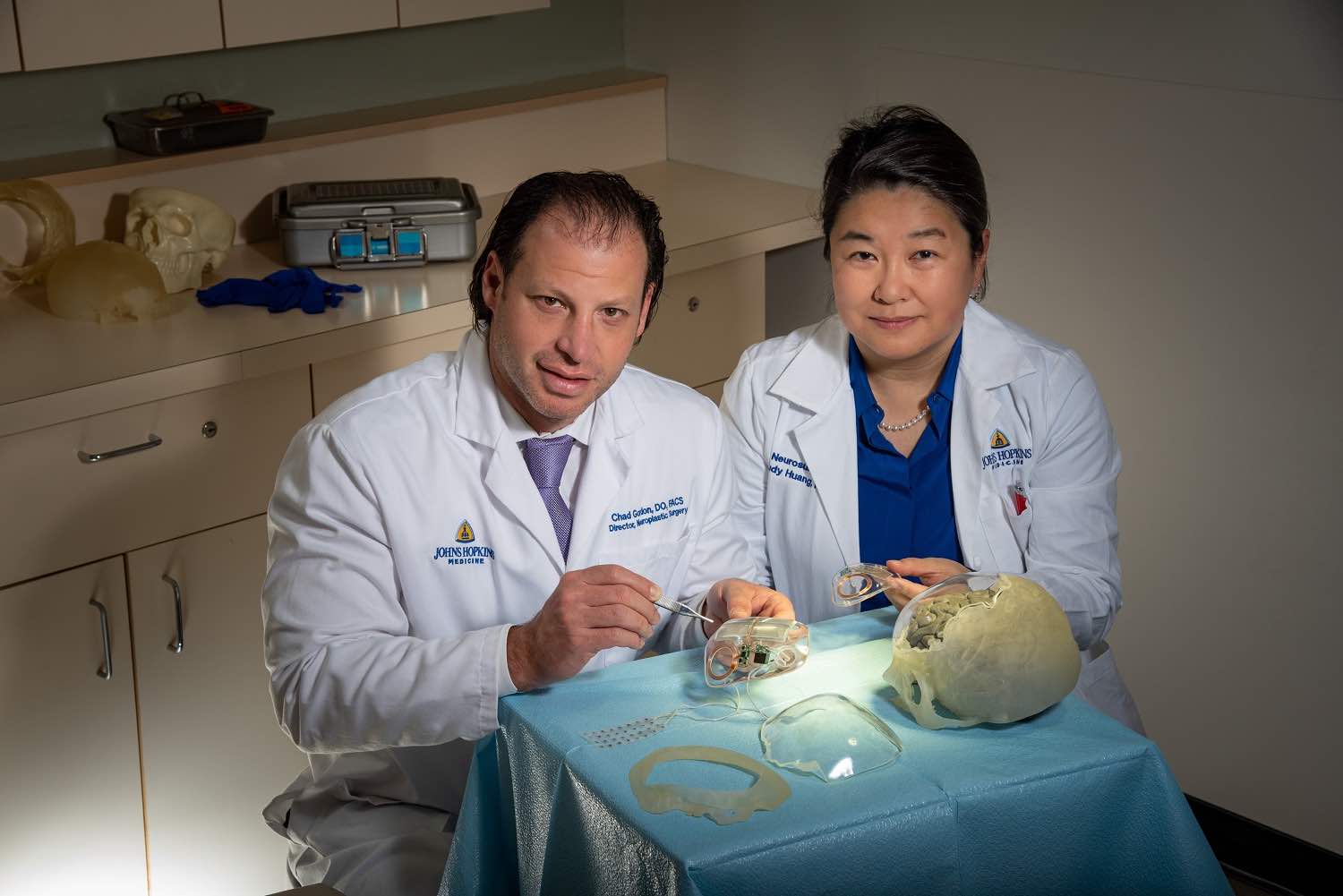 Craniofacial plastic surgeon Chad Gordon and neurosurgeon Judy Huang partner in neuroplastic surgery — a new field developed at Johns Hopkins that has seen the creation of implants and devices that help neurosurgical patients maintain normal skull shapes after surgery and eliminate the need for other invasive procedures.

Although lifesaving operations for conditions such as aneurysms, tumors and strokes can leave patients with dramatic differences in appearance, the field of neurosurgery historically has done little to mitigate these effects.

“Over the past several years, a shift has spread in this regard,” says Judy Huang, vice chair of neurosurgery at the Johns Hopkins University School of Medicine. The change was sparked when, in 2011, craniofacial plastic surgeon Chad Gordon, now director of neuroplastic and reconstructive surgery and fellowship director for the Department of Plastic and Reconstructive Surgery, joined the Johns Hopkins faculty. Gordon, whose training centers on adult craniomaxillofacial surgery, says he noticed a missed opportunity for multidisciplinary collaboration between craniofacial plastic surgeons and neurosurgeons in caring for adult neurosurgical patients, as similar to the way breast cancer management evolved into a multidisciplinary approach back in the 1960s. 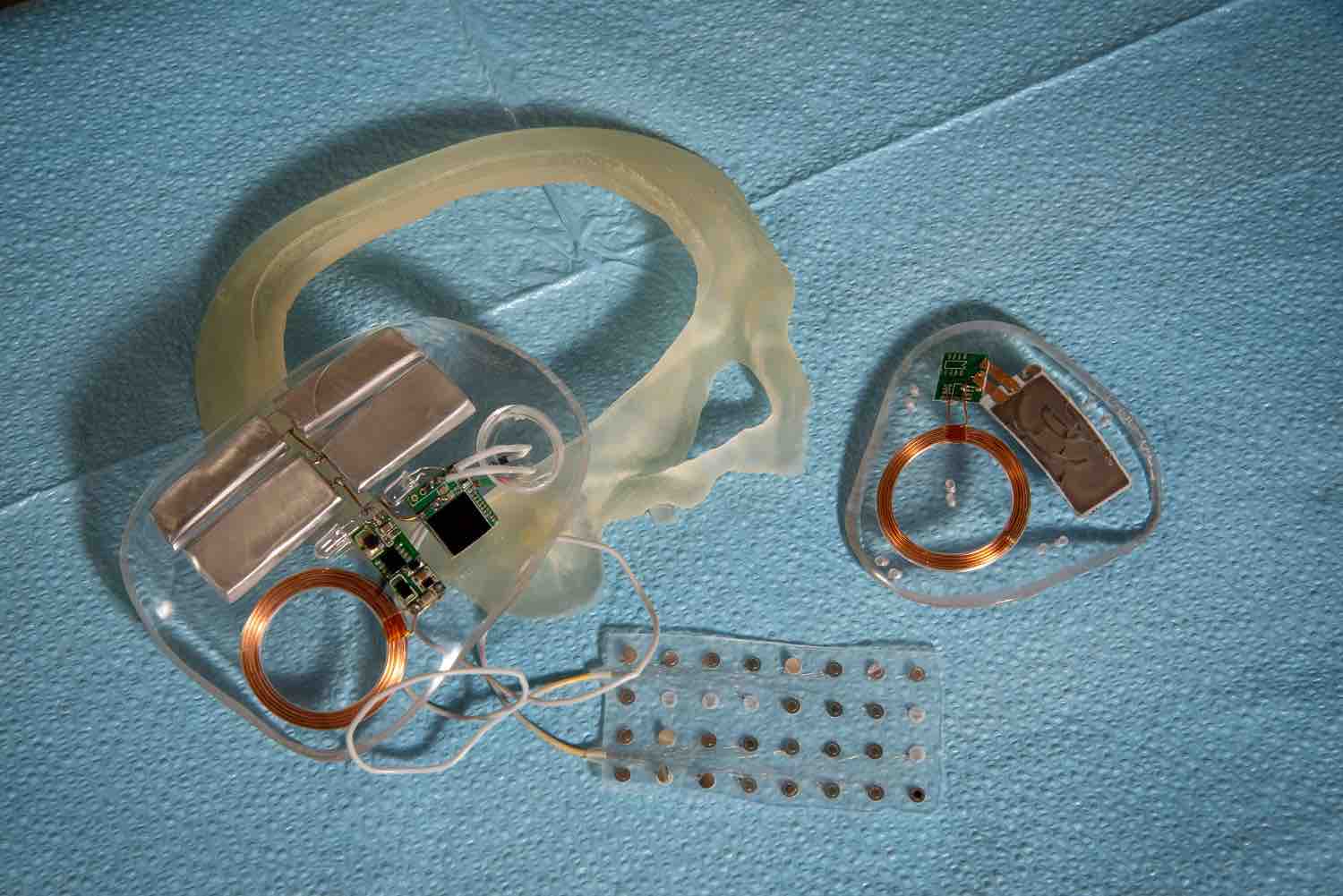 He initially began working with Huang and colleagues in the neurosurgery department, performing operations as a partner using surgical techniques that weren’t part of standard neurosurgical training. As word of improved results spread, so did the volume of patients coming through these combined practices, referred both internally at Johns Hopkins as well as nationally and internationally.

“Eventually, we realized that the reason patients were coming from around the world is because we’d developed a new field: neuroplastic surgery,” Gordon says.

In 2012, he formally joined forces with Huang and focused his practice on neuroplastics, forming the Multidisciplinary Adult Cranioplasty Center. As their practice grew, so did the innovations. Gordon and his colleagues realized that the reason many patients have defects in their appearance after surgeries that involve removing the skull isn’t because of the bone — it’s because of newly missing or displaced fat and muscle. The physician-scientists crafted custom implants that didn’t necessarily mirror bone on the adjacent side, but were thicker in select places to fill in defects.

Taking advantage of this thickness, the team next developed clear implants that could house and better conceal batteries, shunts and other devices that traditionally had raised profiles that pressed against the scalp internally, causing an altered appearance as well as chronic trauma to the skin. More recently, the team created a “smart” implant that includes a completely internalized pressure sensor, obviating the need for invasive methods to test pressure inside the skull after surgery. Results were published in Operative Neurosurgery in January.

Gordon, Huang and their colleagues from neurosurgery, plastic surgery, biomedical engineering and beyond continue to seek innovations in the recently launched neuroplastic surgery laboratory. They’re also disseminating knowledge about the field through yearly symposiums and a new fellowship, which recently graduated its third fellow.

“It all stems from improving the quality of care for patients,” Huang says. “We’re giving patients their lives back in a new way after devastating neurological trauma or disease.”