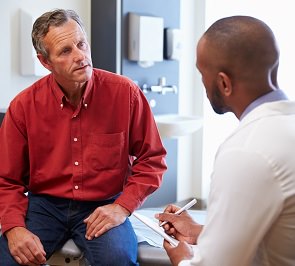 Nearly all men with early-stage testicular cancer are cured.

What’s the best treatment? “The choices are not simple.” Most men (94 to 100 percent) with early-stage testicular cancer, confined to the testicle or lymph nodes that drain the testicles, are cured. “For these men, the difficulty is to determine the best treatment strategy,” says urologist Phillip Pierorazio, M.D., “and the choices are not simple: active surveillance, chemotherapy, radiation therapy, or retroperitoneal lymph node dissection (RPLND). All are associated with significant risks, despite a uniform cure rate.”

Surveillance has the highest risk of cancer recurrence (15 to 20 percent) but the lowest risk of unnecessary treatment. Chemotherapy and radiation therapy have low recurrence rates (less than 5 percent) but are associated with short-term toxicity, including nausea, vomiting, and fatigue, and long-term toxicity, including the risk of hearing loss, nerve issues, second cancers later in life, and early heart disease. RPLND is a major operation with significant short-term surgical risks but minimal long-term risks, and an intermediate risk of recurrence (5 to 10 percent).

“Patients can interpret these data and decide on the management strategy that best fits their values, their personality, and their lifestyle,” says Pierorazio. “There is no wrong answer and no right answer.” These findings, published in the Journal of Urology, serve as the foundation for the American Urological Association Guidelines for the Management of Early-Stage Testicular Cancer. The AUA funded this research project.