Patients with thoracoabdominal aortic aneurysms (TAAAs) encompassing the abdomen and chest can now be treated in a minimally invasively way at Johns Hopkins. The institution is one of 13 centers participating in a clinical trial of a novel stent graft system, a branched device allowing vascular surgeons to treat the damaged portion of the aorta as well as the related branch arteries supplying blood to internal organs. 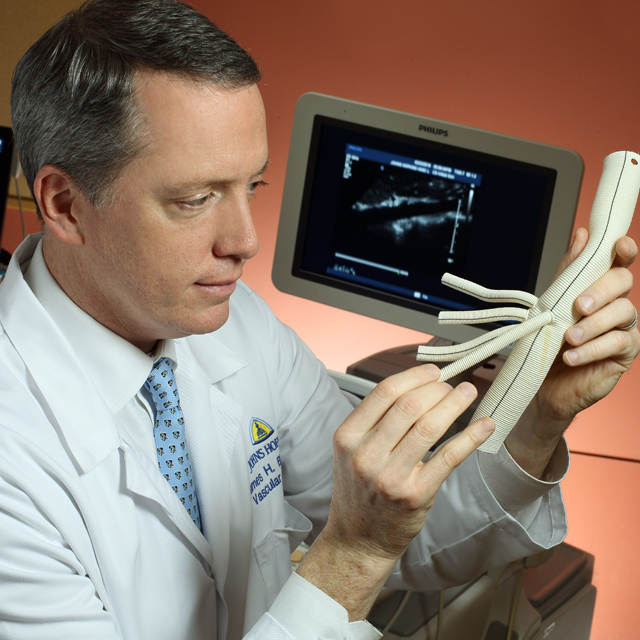 TAAAs, which represent about 10 to 20 percent of aneurysms, typically start in the chest and extend to the abdomen. These traditionally are treated through a complex open operation associated with high morbidity and extended recoveries. The new stent graft system device is guided to the damaged portion of the aorta, like traditional endovascular devices, and consists of a main stent forked at the bottom to provide descending limbs that can be used to preserve blood flow into the critical branches off the aorta.

The system “allows us to avoid major operations in people who would be at very high risk for complications,” says James Black, chief of the Division of Vascular Surgery and Endovascular Therapy at Johns Hopkins Medicine. “It also allows us to repair the aorta without ‘turning off the faucet.’ All the blood is still flowing while fixing the aorta, as opposed to traditional open surgery, where you interrupt the circulation to the individual territories of the aorta as we fix each section.”

The procedure has numerous benefits for patients, Black says. Instead of making an incision extending from the chest across the upper abdomen, surgeons perform the operation through two small incisions in the groin and one in the arm. Operating times are halved, from about eight to 12 hours down to four to five. Patients receiving the device remain in the hospital for three to five days after surgery, compared with 10 to 14 days after open procedures. “It also is likely to have a lower risk for paraplegia, which is probably the most devastating complication in vascular surgery, save for a patient passing away,” says Black.

Johns Hopkins will treat 15 to 30 patients with the procedure during the initial trial, with a potential to include more as patients need it.

“We’ve been waiting for years for this technology to progress and to get away from making the endografts ourselves, which is something we had dabbled in years ago, then gave up,” Black says. “What’s nice is this device allows us to tackle the whole surgery on the same sitting, using very routine endovascular maneuvers.”