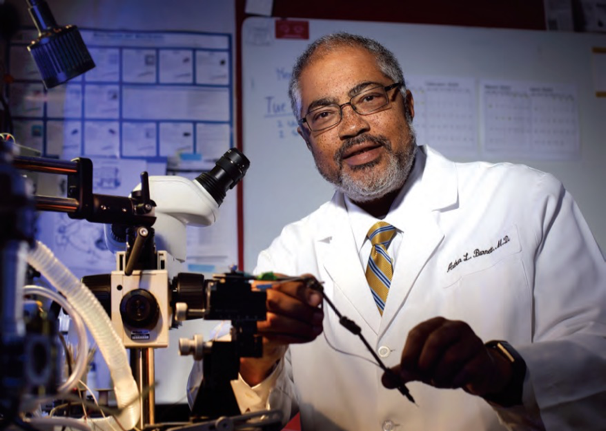 Burnett: “We showed that the pelvic nerve network for penile erection can be distinguished from surrounding tissues of the prostate.”

Four decades ago, after his discovery of the bundles of nerves that control erection, Patrick Walsh, M.D., performed the first purposeful nerve-sparing radical prostatectomy. Building on that work, urologist Arthur Burnett, M.D., the Patrick C. Walsh Professor of Urology, has been working for many years to figure out how to protect these nerves.

Most recently, using new imaging techniques, he and colleagues in the Johns Hopkins Departments of Radiology and Radiological Science and Electrical and Computer Engineering have been working to identify the specific nerves out of these bundles that are involved in erection.

“Erectile dysfunction remains a considerable potential risk of radical prostatectomy today, despite modern technical improvements of this surgery, because the nerves coursing around the prostate are susceptible to traumatic injury,” says Burnett. Even if these nerves aren’t cut, they can be stretched, nicked, or bruised during the procedure.

During prostatectomy, the surgeon uses visual landmarks to spot the general location of the nerves, so they can be protected. However, “although a wide variety of nerve-localization techniques have been brought to this surgery, prior studies have not yet established the exact nerves that produce penile erection – distinct from nerves that do not have any role in erection or cause erection decline.”

In this collaborative investigation, using a rodent model that mimics the prostate and pelvic anatomy of humans, Burnett and colleagues used voltage-sensitive dye imaging while they induced erections, “which caused the relevant erection nerves to selectively light up. We showed that the pelvic nerve network for penile erection can be distinguished from surrounding tissues of the prostate.” Burnett plans to bring this advance to radical prostatectomy surgery soon, “with hopes for improving erection recovery after this surgery.” Their work was published in Scientific Reports.