Physicians in the Johns Hopkins Division of Head and Neck Endocrine Surgery in the Department of Otolaryngology–Head and Neck Surgery are advancing clinical research. The following are just a few advances taking place within the division.

Many patients have symptoms from enlarged thyroids. Historically, the only treatment option for these thyroid goiters has been surgery, but nonsurgical treatment is now possible. Recently, Johns Hopkins partnered with multiple academic medical centers to perform the largest study of radiofrequency ablation (RFA) of thyroid nodules in the United States to date. This study, published in Annals of Surgery, demonstrated the efficacy of RFA at treating benign thyroid nodules. The majority of patients in this study saw the volume of their nodules decrease by more than 50% after treatment, and the complication rate for this procedure was very low.

“With RFA, it is possible to shrink large nodules while preserving thyroid function, avoiding anesthesia and lowering the overall risks of treatment,” says Johns Hopkins study leader Jonathon Russell, chief of the Division of Head and Neck Endocrine Surgery in the Department of Otolaryngology–Head and Neck Surgery. 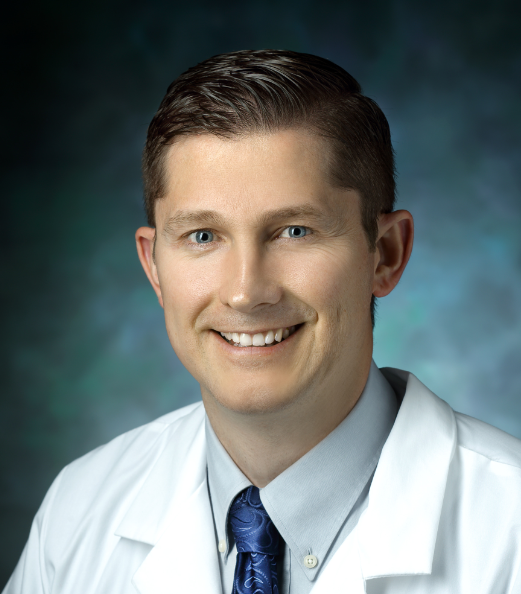 “With RFA, it is possible to shrink large nodules while preserving thyroid function, avoiding anesthesia and lowering the overall risks of treatment.” — Jonathon Russell

Remote-access surgeries have a newly expanded role in the neck. For patients with thyroglossal duct cysts (benign tumors of the central neck) who would prefer to avoid a scar, this may be an option, Russell says. These cysts are common in children and adults, and they can become infected or cause other problems when they swell. The traditional approach creates a visible incision that can be troublesome to some patients. Russell and his colleagues recently published in Head & Neck the first case series showing that a vestibular (transoral) approach could avoid any visible scarring while removing these cysts indefinitely. The case series, involving six patients with a mean age of 38 and a mean cyst size of 1.8 cm, reported no surgical complications or recurrences.

Leveraging Metabolism to Strengthen the Immune Response to Cancer

In a recent study published in Cancer Research Communications, head and neck endocrine surgeon Alex Harbison and colleagues analyzed metabolic networks impacting anti-tumor immunity across cancers including head and neck and thyroid cancers. The team identified a detrimental association between specific aspects of polyamine metabolism and anti-tumor immunity. Polyamine metabolism was also found to be associated with the extent of anti-tumor T-cell response in early-stage papillary thyroid cancers. In close collaboration with immunologist Erika Pearce of the Bloomberg~Kimmel Institute for Cancer Immunotherapy, part of the Sidney Kimmel Comprehensive Cancer Center at Johns Hopkins, efforts are underway to identify metabolic targets for enhancing anti-tumor immunity.

“Our long-term goal is to leverage metabolic regulation of the immune system to increase tumor control and decrease overall treatment-related morbidity in the management of head and neck and thyroid cancers,” Harbison says.

The recurrent laryngeal nerve is responsible for motion of the vocal folds. Therefore, good surgical dissection and nerve-monitoring technology are important during thyroid surgery to maintain good function of this nerve for good voice, swallow and airway function after surgery. Recently, Johns Hopkins head and neck endocrine surgeon Vaninder Dhillon and her colleagues published a review article in Frontiers in Endocrinology discussing the role of intraoperative nerve monitoring of the recurrent laryngeal nerve in thyroid surgery, a procedure that advances into endoscopic and percutaneous territory. This article discusses continuous and intermittent nerve monitoring as well as the current paradigms of their use. It also discusses the future of intraoperative nerve-monitoring technologies in scarless thyroid surgery and percutaneous approaches to thyroid pathology using radiofrequency ablation.

“Patients are often eligible for parathyroid surgery in a fashion that would make it difficult for the average person to know that surgery had ever happened,” Russell says. “While avoiding a scar is not a priority for all patients, we have demonstrated that many patients can safely make the choice as to whether or not it matters to them.”