New Tool for an Old Disease: Use of PET and CT Scans May Help Develop Shorter TB Treatment 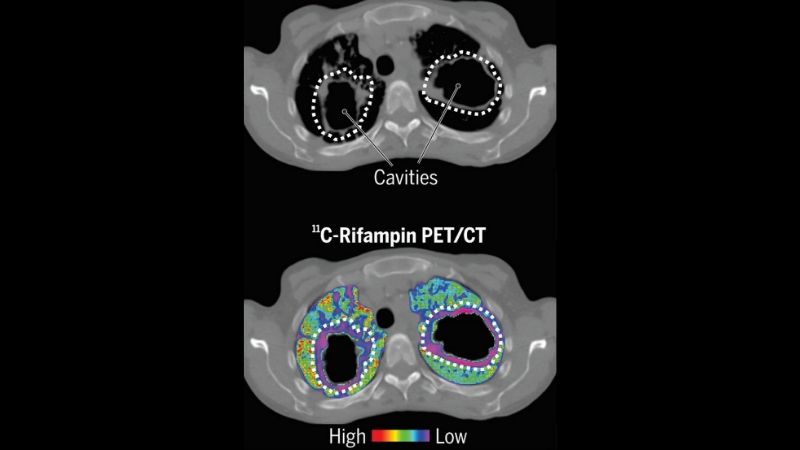 Johns Hopkins Medicine researchers have shown that PET and CT imaging can be used to track, over time, if an anti-tuberculosis drug can reach TB bacteria nested inside cavities in the lungs. The CT scan at the top reveals the location of two lung cavities, while the bottom PET/CT image shows the failure of a radioactively tagged anti-TB drug (shown as colors) to get inside those cavities and attack the microbes they encase. Credit: Johns Hopkins Medicine

Experts believe that tuberculosis, or TB, has been a scourge for humans for some 15,000 years, with the first medical documentation of the disease coming out of India around 1000 B.C.E. Today, the World Health Organization reports that TB is still the leading cause of death worldwide from a single infectious agent, responsible for some 1.5 million fatalities annually. Primary treatment for TB for the past 50 years has remained unchanged and still requires patients to take multiple drugs daily for at least six months. Successful treatment with these anti-TB drugs — taken orally or injected into the bloodstream — depends on the medications “finding their way” into pockets of TB bacteria buried deep within the lungs.

Now, researchers at Johns Hopkins Medicine and four collaborating medical institutions have developed what they say is a novel means of improving how TB can be treated. Their system adapts two widely used imaging technologies to more precisely track, over time, if an anti-TB drug actually reaches the areas where the bacteria are nested.

The new imaging tool incorporates positron emission tomography and computed tomography — commonly known as PET and CT scans — to noninvasively measure the effectiveness of rifampin, a key anti-TB medicine. The researchers describe a trial using the tool in TB patients in a paper published Feb. 17, 2020, in the journal Nature Medicine.

“While most TB patients are successfully treated with drug regimens which include rifampin, it still takes at least a six-month course to cure the disease,” says Sanjay Jain, M.D., senior author of the paper; professor of pediatrics, and radiology and radiological science at the Johns Hopkins University School of Medicine; and professor of international health at the Johns Hopkins Bloomberg School of Public Health. “We now have evidence that imaging the lungs with PET and CT scans may help researchers and physicians better determine how much rifampin is reaching the bacteria over time, and then use the data to steer decisions for speedier and more effective TB-fighting measures such as higher doses of the drug.”

A serious treatment issue for patients is that the TB infectious agents, called Mycobacterium tuberculosis, protect themselves by acting like a microbial mole, burrowing safe-haven cavities in the lungs. The cavities are carved by the same cell-killing activity that the TB bacteria use to produce pneumonia and its characteristic pulmonary lesions (commonly referred to as “spots on the lungs” when seen on CT scans). Because the process also destroys blood vessels and builds up scar tissue in the area surrounding a cavity, it can be difficult for anti-TB drugs travelling through the bloodstream to reach the microbes nested inside.

“Up until now, the only way we’ve known that rifampin sometimes does not reach the bacteria inside cavities has been by examining portions of lungs surgically resected from patients for whom standard anti-TB therapy failed,” says Alvaro Ordonez, M.D., a research associate in pediatrics at Johns Hopkins Medicine and lead author on the Nature Medicine paper. Besides being invasive and difficult for the patient, such evaluations have two major shortcomings.

“Depending on which pulmonary lesions or cavities are resected, one may see rifampin levels adequate enough to kill the TB bugs,” he explains. “But resect a different area of the lung where the drug wasn’t able to reach lesions and cavities and you’ll get a very different result. More importantly, the overall effectiveness of the treatment course cannot be properly measured since the resections are taken at single points in time and aren’t from every location where there could be an infection.”

Working with animals over the past decade, Jain and his colleagues developed a noninvasive imaging technique called dynamic 11C-rifampin PET/CT to open a clearer window on the previously hidden battle taking place between microbe and medicine in the lungs. The isotope-tagged version of rifampin, 11C-rifampin, emits a charged particle — called a positron — that enables the drug to be detected and tracked by a PET scan.

In studies published in 2015 and 2018, Jain and others demonstrated first in mice with pulmonary TB and then in rabbits with TB meningitis that dynamic 11C-rifampin PET/CT could successfully follow the movement of the tagged drug into lesions and cavities, both in the lungs and the brain. In both cases, the data revealed that the penetration of 11C-rifampin into the TB pockets was consistently low and could change over a period of a few weeks.

For the most recent trial, the researchers looked for the first time at how well the dynamic 11C-rifampin PET/CT tool monitored the levels of rifampin given to 12 human patients with TB in the lungs. The participants were first given an injected microdose of 11C-rifampin that was tracked by PET to determine the drug’s concentration over time in TB-infected lesions in the lungs and other areas throughout the body (uninfected sections of the lungs, brain, liver and blood plasma).

Following this imaging, the patients were given untagged rifampin intravenously at the recommended treatment dosage level. Blood was drawn from the patients at various times and the levels of rifampin were measured by mass spectrometry. This showed that the microdose amount of 11C-rifampin could accurately represent the behavior of the traditional clinical dosage.

The PET scan data revealed that the amount of 11C-rifampin uptake was lowest in the walls of the TB-caused lung lesions and cavities, less than half what was seen in uninfected lung tissues.

“This is eye-opening since the lesions and cavities are the sites known to have the largest populations of bacteria in TB patients,” Ordonez says. “Therefore, rifampin is not getting where we need it most.”

The researchers used the findings on drug concentrations at the infection sites to predict how increasing the rifampin dose might shorten the treatment time for TB patients. This work — done in collaboration with teams at the University of Maryland School of Pharmacy, led by Vijay Ivaturi, Ph.D., and the Texas Tech University Health Sciences Center, led by Tawanda Gumbo, M.D. — suggests that increasing the dose of rifampin to higher, yet safely tolerated levels could reduce the treatment course in most TB patients from six months to four months.

“This would have a dramatic impact on the worldwide fight against TB,” Jain says.

The researchers say that further human trials are needed to validate the promising results of this study, and perhaps, broaden the use of the PET-CT technique beyond anti-TB drugs. For example, similar studies are being conducted with patients who have infections due to methicillin-resistant Staphylococcus aureus, or MRSA, which often is treated with a long-term course of rifampin.

“We hope that the tool will one day enable clinicians to determine the most effective doses of specific drugs in specific patients, so as to further optimize the treatment of infectious diseases,” Jain says.

No conflicts of interest related to the study were reported.