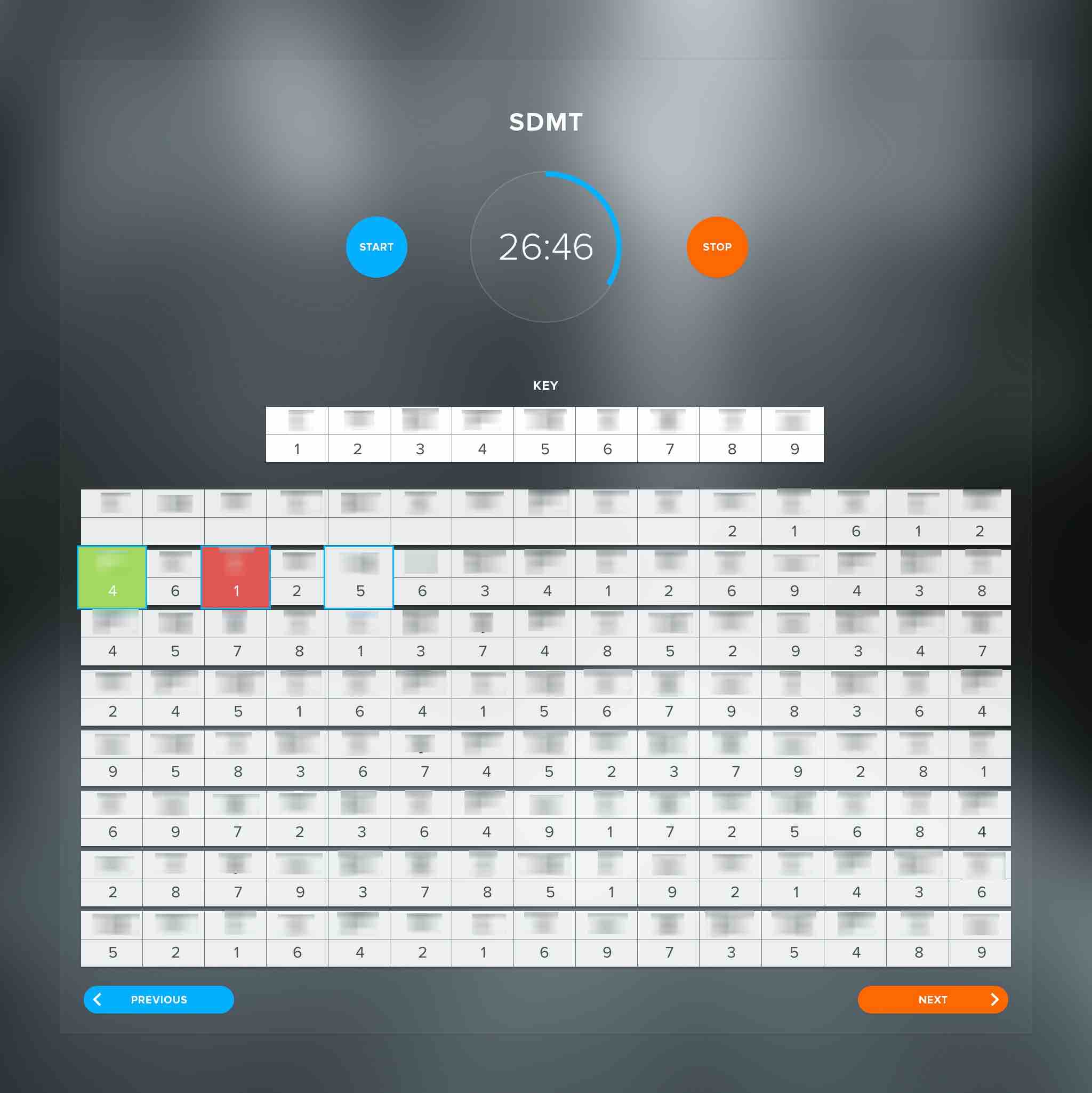 A screenshot from iCAMS shows the gold standard method to measure processing speed and screening cognition in people with multiple sclerosis. Areas are blurred to maintain test integrity.

More than half of patients with multiple sclerosis experience some changes in thinking and memory, yet the vast majority are not given a formal, validated cognitive assessment as part of their care, says Abbey Hughes, a rehabilitation psychologist and assistant professor of physical medicine and rehabilitation at the Johns Hopkins University School of Medicine. She and psychologist colleagues Meghan Beier and Jagriti Bhattarai have developed a clinical research program focused on MS and rehabilitation psychology, with several ongoing grant-funded projects.

“Part of our goal is identifying what tests are most sensitive to assessing cognitive function, how nonpsychology providers can administer those tests accurately and proficiently, and how to monitor cognitive changes over time,” Hughes says.

Beier developed a tablet-based mobile app called iCAMS, which adapts the widely used, paper-based Brief International Cognitive Assessment for Multiple Sclerosis (BICAMS) for a digital format. The test measures patients’ processing speed as well as their ability to learn verbal and visual information. The app was found to produce accurate results equivalent to the paper test, but with about half the time to administer and score. Those results were published last September in the International Journal of MS Care. Hughes and Beier also have been comparing the accuracy of an open access, web-based cognitive test (testmybrain.org) developed by neuroscientists with the BICAMS in assessing cognitive function, and are in the process of writing and submitting those results to a journal. 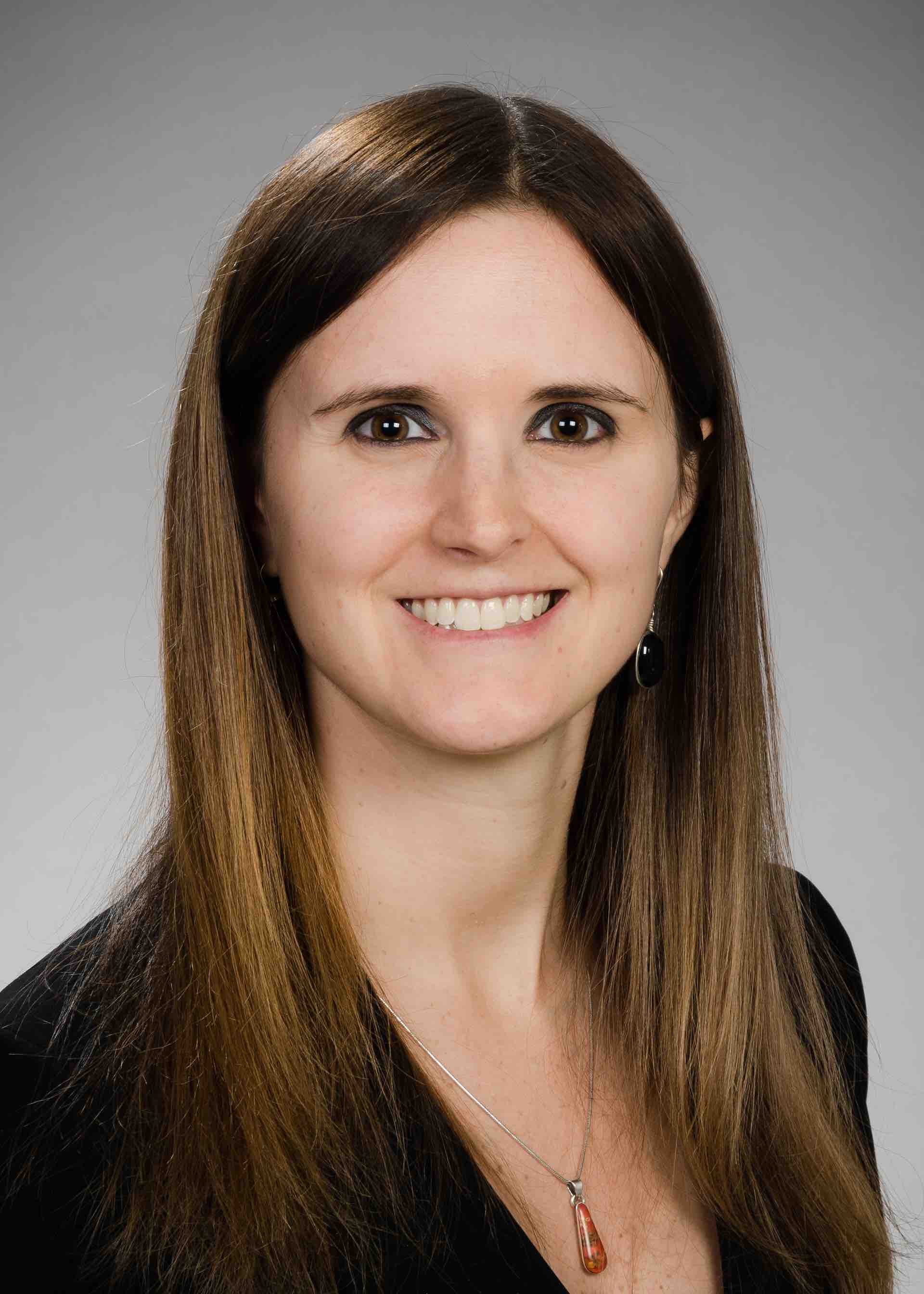 “Ultimately, our goal is to improve quality of life for patients and the people who support them.” — Abbey Hughes

Beier was one of several experts that the National Multiple Sclerosis Society tapped to make recommendations for guidelines, published in 2018, on cognitive screening and management in MS care. These endorse patients receiving an early baseline screening as well as annual reassessments to test for disease activity, treatment effects and progression of cognitive impairment, and to screen for any new problems.

Another research effort is looking to develop an effective, accessible intervention for MS patients to manage sleep disturbance — a common MS symptom that can contribute to cognitive problems as well as fatigue, pain, depression. Hughes and Beier are planning a four-week program, including online assessments and phone calls from a therapist, to teach patients strategies to improve sleep. The program is based on cognitive behavioral therapy for insomnia —considered the gold standard treatment, says Hughes — and could lead to improvements in cognition.

Bhattarai is directing an additional project to understand how health disparities and the quality of communication between providers and patients impacts health care among African American patients with MS, with the goal of improving the health care experience of historically underserved, underrepresented MS patients.

Research on effective treatments for other conditions affecting cognitive function, such as traumatic brain injury, stroke and Alzheimer’s disease, is more advanced than for MS, Beier says. “I think we have a lot of catching up to do,” she says, “and I’m passionate for that reason. People with MS are very motivated and really want to advance the field.” A unifying theme for the research team is improving accessibility and getting patients the care they need, she says.

“Ultimately, our goal is to improve quality of life for patients and the people who support them, allowing them to select the tools they need based on their symptoms and individual values,” adds Hughes.