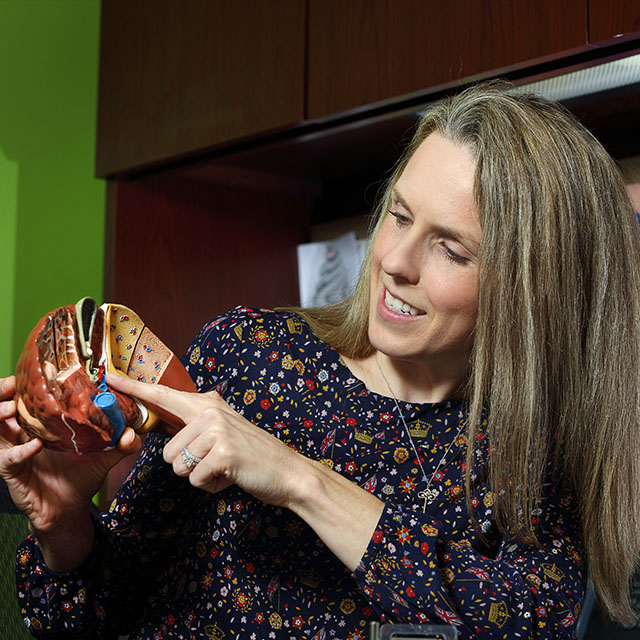 Since childhood Betsy King, now a pediatric transplant surgeon, knew she’d be working with her hands later on in life.

The daughter of a bricklayer from the Midwest, King knew since childhood that she wanted to do something with her hands. Little did she know it would be saving the lives of children who need new kidneys and livers.

Organ transplant surgeon Betsy King says she cannot pinpoint when during her childhood outside Chicago that she first wanted to be a surgeon. But for sure, she says, her parents were strong influences.

“My dad was a bricklayer, which had nothing to do with surgery, but I saw my whole life as doing something with my hands, either building something or making something or fixing something,” says King, now helping to direct the pediatric transplant program at Johns Hopkins. “I was fascinated with anatomy at a really young age, maybe around 10,” she says, “and the idea of using your hands to fix the human body was very appealing to me. I never turned back.”

Fast forward 15 years, and she found herself in medical school at the University of Chicago. There she held on to her vision of being a surgeon, perhaps a plastic surgeon she thought after rotating on that surgical service. Her interest in painting and sculpture seemed to complement the subspecialty.

“It seemed to be the culmination of everything I was looking for,” says King.

Despite the initial pull of plastic surgery, it seemed to lack the medical complexity and patient management she had appreciated as a student during internal medicine and other rotations. She had a moment of panic: “What am I going to do with my life now?”

The answer came during her next rotation — transplant surgery. King was blown away. “It was just this beautiful combination of elegant, complex, technically challenging operations and equally complex and challenging medical issues that the patients were going through,” she says. “The management they required really appealed to me. I said to myself, ‘Wow, this is what I need to do, this is my passion.’” 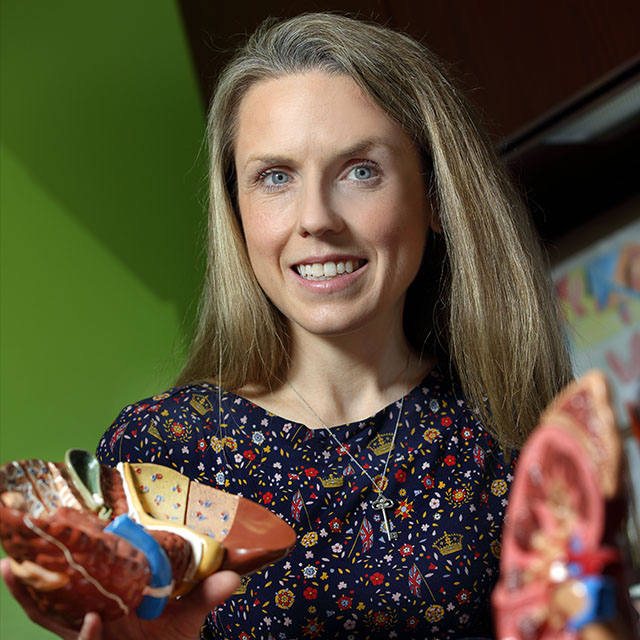 After medical school, that passion deepened during a visit with her husband to the Johns Hopkins medical campus. As a couples match, they were both applying for residencies there — she in surgery and he in pediatric anesthesiology and critical care medicine. While King’s husband was familiar with Johns Hopkins because his father had trained there, she felt like she was in Oz, far removed from her roots.

“I always thought of Hopkins as this great mecca of medicine, where surgery was really born,” says King. “At the time, it was kind of overwhelming for me.”

After a day of interviews and campus tours, however, she was smitten. So was her husband.

“We met back up at the airport, and it was a nice moment because we had both fallen in love with Johns Hopkins and immediately felt won over,” says King.

How? King points to the people.

“The single greatest thing about Hopkins is this collection of people who are so dedicated and committed to the same common goal,” she says. “That was just awesome — it was everything I wanted.”

And it was what she got, after she and her husband were accepted into their residency programs. King also wanted research experience, so she took three years away from her surgical training to pursue a Ph.D. program in clinical investigations at the Johns Hopkins Bloomberg School of Public Health. Her focus was hospital readmissions following kidney transplants. Through that subject, she found a research track very much in sync with her surgical path and who she was at her core.

“In studying who is at risk for readmissions and how it impacts post-transplant outcomes, one important but poorly understood factor was the influence of social determinants of health,” says King. “That was the beginning for me in understanding social disparity and how it can have a negative effect on our patients.”

Around the same time, King was helping to run Johns Hopkins’ live donor campaign, a program in which she and colleagues train patients and family members how to identify live organ donors rather than wait for a deceased donor organ. Wait lists for donor kidneys and livers can be long, and patients can die before an organ becomes available — “a terrible outcome we want to avoid at all costs,” says King.

One answer for a pediatric patient is a friend or family member willing to donate a kidney or portion of their liver. But historically, King notes, underserved and minority populations have not had great access to living related donors, partly because they may be unaware of the resource. The live donor program is designed to address that disparity.

“I was able to work with a group of wonderful patients on our wait list in the Baltimore area who otherwise wouldn’t have known about live kidney donation,” says King. “We educated these patients and helped them understand the details of live donation so they could be well informed about considering that as an option for their care. In a way, this sort of leveled the playing field for them, to advocate for themselves and utilize resources.”

That grass roots effort appealed to King and, more importantly, to the patients in the program. Even if they did not identify a live organ donor, they were better informed about transplantation, says King.

“It made such a profound impact on their lives to have that one-on-one interaction and engagement with the staff and faculty here at Hopkins that they otherwise wouldn’t get,” King says.

Stimulated by the potential impact, King has been applying for National Institutes of Health funding to continue her research on social determinants of health related to kidney and liver transplant and to make transplant more accessible for underserved populations. One avenue is a group of non-directed live donors, or altruistic donors, who have offered to donate a portion of their liver to any patient — adult or child — who needs it.

“It’s an option for pediatric patients, especially for those who may otherwise not be able to get a live donor transplant,” says King.

King and colleagues are also exploring ways to boost post-transplant support for patients and families in disadvantaged communities. Managing the medications and frequent clinic visits for a 2-year-old liver transplant patient is no easy chore even for a family with resources, notes King. For a single mom with a full-time job, it’s nearly impossible.

“Just coming to Johns Hopkins for labs can be a very big deal,” says King. “This is another area where we can empower our patients and their families with varying levels of health literacy, to engage them and create accessible post-transplant care. We can help parents better utilize hospital and community resources that can help following transplant.”

King sees such holistic pursuits and her social determinants research as very much part of the framework of the hands-on culture at Johns Hopkins and the career she is building. As director of the pediatric surgical abdominal program, she is leading efforts to grow the program. In her free time, she still paints and sculpts — the other thing she does with her hands.

“As surgeons, we’re creative in the operating room, so for me it’s important to have time to be creative in a different way,” says King. “Also, my art is something I share with my children.”