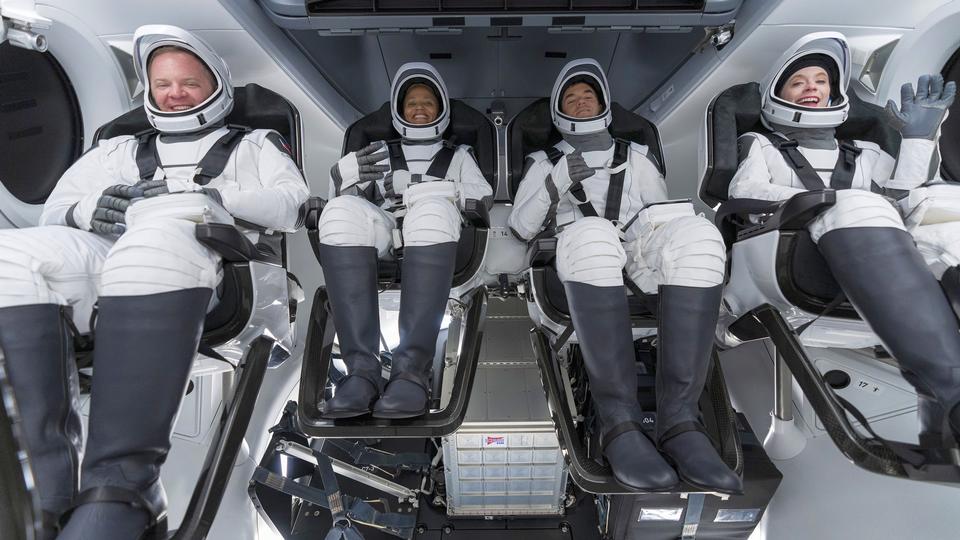 The recent Inspiration4 spaceflight orbited the first all-civilian crew (left to right: Chris Sembroski, Sian Proctor, Jared Isaacman and Hayley Arceneaux) without a professional astronaut aboard. Before and after the historic mission, a Johns Hopkins Medicine experiment evaluated each crew member’s vestibular function (sense of balance and body position) to look for any impacts from time spent in microgravity. Credit: Public domain image courtesy of Space X

The Inspiration4 spaceflight from Sept. 15–18, 2021, was historic for orbiting the first all-civilian crew without a professional astronaut. The mission also marked a milestone for Johns Hopkins Medicine otolaryngology — because it provided out-of-this-world data for an experiment designed by Johns Hopkins researchers. The objective: examining how the vestibular functions (the sense of balance and body position) of the four crew members were impacted by the microgravity of space.

“Since motion sickness and disorientation are common among astronauts going into space, this research is important because it may enable researchers in the future to predict from pre-flight testing how much at risk are astronauts to suffering performance-impacting balance problems,” says principal investigator Mark Shelhamer, Sc.D., professor of otolaryngology–head and neck surgery at the Johns Hopkins University School of Medicine.

As directed by Shelhamer and co-investigator and fellow Johns Hopkins Medicine otolaryngologist Michael Schubert, Ph.D., the Inspiration4 crew members used a computer tablet before taking off to conduct sensorimotor tests evaluating how their inner ears sense gravity on Earth, and how their brains use that sensory input to control their overall posture and the vertical and torsional (rotation along the line of sight) alignment of their eyes. Previous research has shown that both are components for proper sensorimotor function, and that in a near-weightless environment, this vestibular function must adjust to prevent balance impairment.

Shelhamer says the same Johns Hopkins Medicine sensorimotor tests will be performed on the astronauts now that they’ve returned to Earth (and again are experiencing the influence of gravity).

“This enables us to scientifically compare post-flight results to the information we gathered before launch, and perhaps, use those evaluations to establish protocols for predicting how people will perform in space,” he explains. “Standardized vestibular testing might one day help determine if a crew should be accompanied by an in-flight medical officer or receive other assistance to treat motion sickness and disorientation.”

Participating in the Inspiration4 mission, Shelhamer adds, has provided Johns Hopkins Medicine “with a tremendous opportunity to demonstrate our role in sensorimotor testing and space health research.”

Funding for this medical experiment, and the four others that were part of the Inspiration4 mission, came from Baylor College of Medicine’s Translational Research Institute for Space Health (TRISH). TRISH, a consortium between Baylor and two other academic institutions overseen and supported by NASA’s Human Research Program, studies ways to solve the challenges of human deep space exploration.