Out of Many Ovarian Precancerous Lesions, One Becomes Cancer 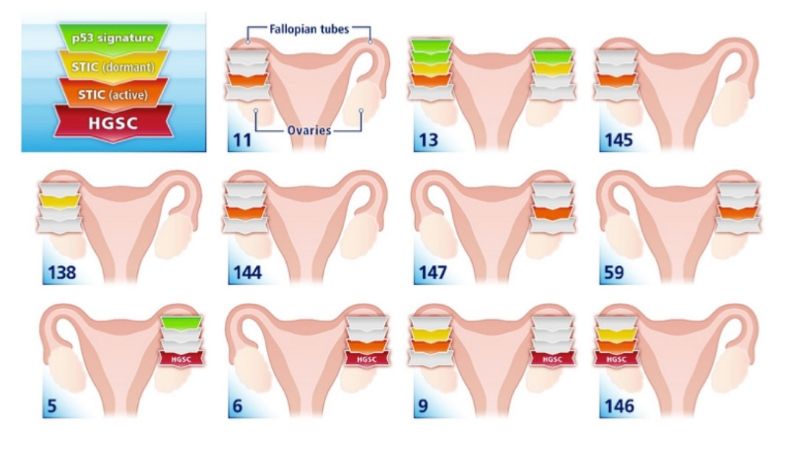 In a novel study of cancer genetics using fallopian tube tissue from 15 women, researchers at the Johns Hopkins Kimmel Cancer Center say they have found evidence that the most common and lethal type of ovarian cancer arises not from a uniform group of precancerous lesions, but from individual growths found in groups genetically unrelated to each other.

If confirmed in further studies, the discovery, described in the May issue of the Journal of Pathology, would go a long way towards upending a longstanding cancer dogma dictating that cancer steadily progresses from any and all precancerous lesions, and could lead to new ways to fight this deadly disease.

“We’re finding that it’s not a straight line progress from precancerous lesions to cancer in these tumors,” says Ren-Chin Wu, Ph.D., first author and associate professor at Chang Gung University School of Medicine in Taiwan  “If we can find a way to eradicate just the ones that progress, and distinguish them from those that maintain dormancy forever, we likely can make treatments more effective and save more women’s lives,” he adds.

Researchers @hopkinskimmel find the most common and lethal type of #ovariancancer originates from individual growths unrelated to each other and not from pre-cancerous lesions. Click to Tweet

Up to 70 percent of all ovarian cancers are so-called high-grade serous carcinomas (HGSCs) and account for the vast majority of the 14,000 women who die of ovarian cancer each year in the U.S., explains study leader Tian-Li Wang, Ph.D., director of the Molecular Genetics Laboratory of Female Reproductive Cancer and professor of pathology, oncology, and gynecology and obstetrics at the Johns Hopkins University School of Medicine. “This cancer is incredibly hard to beat because it’s usually diagnosed at a late stage since earlier stages have few to no symptoms,” says Wang.

To investigate this biological path, Wang and her colleagues, including first author Wu, studied fallopian tube and ovarian tissue from 15 women seen at the Johns Hopkins Hospital.

Eleven of these women had no evidence of cancer when these organs were removed prophylactically to reduce their cancer risk. The other four already were diagnosed with HGSCs.

Using high-powered microscopes, the researchers first identified a variety of different precancerous lesions clustered in three groups according to pathological diagnostic markers on the women’s fallopian tubes. They then removed cells from these lesions using a technique called laser capture microdissection to determine how fast the cells in each of the lesions were dividing, and to enable analysis of their genetic mutations.

The researchers say they found these precancerous lesions were in a variety of stages of activity. Some were dormant and not actively proliferating. Others were proliferating but weren’t yet cancer.

Overall, their genetic analyses on 24 lesions in 11 women identified mutations in 12 different cancer-related genes. Surprisingly, they say, one cancer-free woman had multiple precursor tubal lesions and each appeared to be driven by different sets of mutations, suggesting that they weren’t derived from a common primary lesion and had each arisen independently.

In three of the four women with active ovarian cancer, the researchers were able to link their tumors genetically with a primary precursor lesion on their fallopian tubes. However, for one of the women, the researchers couldn’t find a genetic link with co-existing precancerous lesions—reinforcing the idea that while many precancerous lesions arise in women at risk for ovarian cancer, only some progress to active cancers.

Further experiments that modeled mutation progression in these tumors suggest that it may take decades for tumors to progress from precancerous lesions to HGSCs, says co-lead author Cristian Tomasetti, Ph.D., associate professor of oncology. This potentially offers a large window of time to intervene before cancers become advanced and difficult to treat, but he says researchers will first need to find ways to detect cancer precursors that are dangerous from those unlikely to cause any harm.”