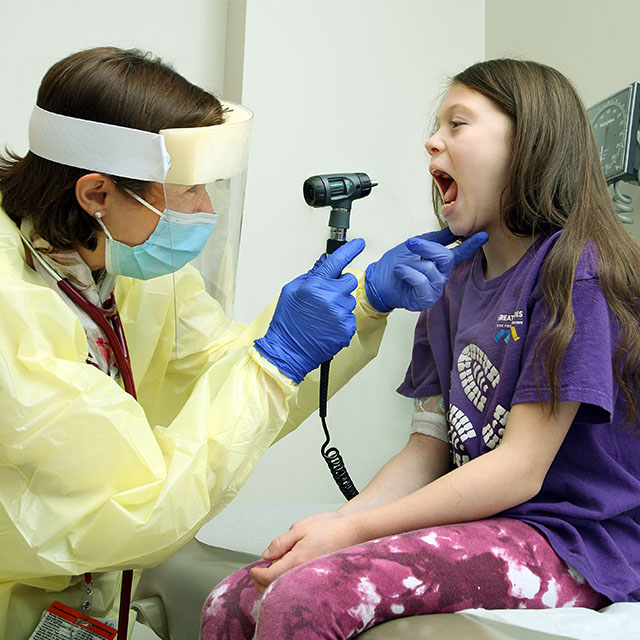 Systems engineer, pilot and astronaut were among Lori Vanscoy’s career choices as she entered the United States Naval Academy, although she figured her less than 20-20 vision would disqualify her for deep space travel. Nonetheless, she did travel quite a bit after her senior engineering design project — a vision aide for quadriplegics — cultivating a strong interest in medicine.

“I met with people at rehab facilities in Baltimore and realized that there was no such things as remote control for computers,” says Vanscoy. “My work in that area became my bridge to medicine.”

To become a physician, she’d first she have to make up pre-med prerequisites such as organic chemistry and biology while serving as a Navy line officer working in satellite communications. Then she found her way to Duke University School of Medicine and a pediatrics residency at the Naval Medical Center in San Diego, California. Her next stop — two months before 9/11 — was Camp Pendleton, where she served for three years as a general pediatrician.

“Our patients’ parents were being deployed — it was a crazy time,” says Vanscoy.

After her fellowship in pediatric pulmonary medicine at Johns Hopkins Children’s Center, Vanscoy was also deployed on a four-month long humanitarian mission aboard the USNS Comfort. With stops in Columbia, the Dominican Republic, El Savador, Haiti, Nicaragua and Panama, she was part of a team of pediatricians providing care for local children and families, which she found deeply rewarding. But her favorite pediatric experience was taking care of children with cystic fibrosis (CF) during medical school, residency and in practice as a general pediatrician, which led her to the fellowship.

“I loved the chronic care aspect of taking care of patients with CF, where you could really get to know them and their families longitudinally from infancy through college and young adult years,” says Vanscoy. “I was also fascinated by the complexity of this systemic disease and its varied manifestations.”

Experience stimulated her research interests in genetic modifiers of CF lung disease and the causes of variation in response to cystic fibrosis transmembrane conductance regulator (CFTR) modulator drugs. Thanks to these therapies, survival for patients with CF is now in the late forties and beyond, which Vanscoy calls a game changer.

“With the advent of these new medications just within the last year, we are projecting that CF will now be a chronic disease you live with and not one that confers any shortened life expectancy,” says Vanscoy. “From the time I started in pulmonology, it has really been a tremendous, seismic shift in what we can do for patients with CF.”

Following her fellowship, Vanscoy served as the Cystic Fibrosis Center director for six years at the Naval Medical Center in Portsmouth, Virginia. There, she began to pursue another research interest related to her systems engineering background — machine learning — which she believed could also benefit young patients with CF.

“I’m interested in studying predictive machine learning algorithms to better understand disease trajectory and treatment response at the individual level to tailor our CF treatment for the individual,” says Vanscoy.

What better place to pursue such investigations, she pondered? Flying and being an astronaut may have fallen further down her list, she acknowledges, but now as a pediatric pulmonologist at Johns Hopkins, she feels the sky’s the limit.

“The energy and innovation is unparalleled. This is such a unique place — it has a little bit of a small hospital feel yet it’s a world class institution,” says Vanscoy. “I was really drawn to the interdisciplinary collaboration, the opportunity to work with people in the CF Center and potentially the Applied Physics Lab, the school of engineering and computer science, to do what I want to do research wise. That’s what really drew me back, and I’m thrilled to be back.”