Pediatric Stroke: When tPA Is the Best Choice 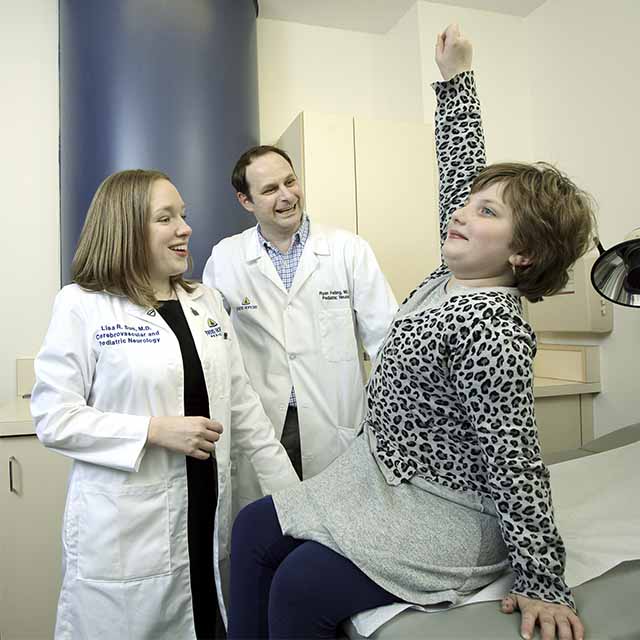 Pediatric neurologists Lisa Sun and Ryan Felling are impressed by their young patient’s range of motion following tPA treatment and physical therapy for her ischemic stroke.

As soon as pediatric neurologist Lisa Sun got the call from an emergency department (ED) physician describing a 9-year-old patient’s ischemic stroke-like symptoms and the time of their onset, she was out the door. Sun and pediatric neurologist Ryan Felling, director of the Johns Hopkins Pediatric Stroke Program, were looking for a candidate for tissue plasminogen activator (tPA) treatment and this young patient appeared to meet the criteria. Now they had to rush to the ED to assess the patient and confirm their suspicions. There was no time to lose—the clock was ticking.

“You have to use this medicine within 4 1/2 hours of the onset of symptoms, before the risk of the treatment becomes greater than its benefit,” Sun says.

At the ED, Sun and Felling learned from Melissa Schober that her daughter, Ruth, felt dizzy during afternoon recess at school and then stumbled after making it inside to the cafeteria. “Her friends said she was slurring her words and lurching from side to side,” says Schober, of Baltimore. “Her right leg just stopped working.”

When Ruth arrived at the pediatric ED around 5 p.m. as a trauma patient, Sun says, she was slurring her speech and weak on one side. Seeing no sign of trauma, the ED activated its pediatric Brain Attack Team, or BAT, and summoned Sun and Felling. Now with their young patient in front of them and MRI results in hand revealing an occlusion in her middle cerebral artery, the pediatric neurologists could see that their patient’s condition had declined further.

“The MRI showed she was having a stroke at the time, a small area of stroke and a much larger area at risk for stroke because it was not getting enough blood flow,” says Sun. “We were concerned that the area at risk was going to indolently die.”

Considering their patient’s worsening symptoms and the onset of her symptoms three hours and 40 minutes earlier—well within the 4 1/2-hour window for tPA—Sun and Felling informed Schober that Ruth was eligible for the treatment. The therapy, they explained, has been shown to dissolve clots and improve blood flow in patients with ischemic stroke, reducing their risk of neurologic deficits. They added that tPA comes with a risk of bleeding, particularly for patients with signs of bleeding in the brain. Fortunately for Ruth, there were no such signs. Again, they noted that time was of the essence.

“Our goal was to determine whether we could give tPA, would it be safe and reasonable,” says Sun. “We also know it’s more effective and safer the sooner you give it.”

Even during the one-hour infusion, Sun notes, Ruth started showing signs of improvement: “She started moving her right side and her speech got better.”

For Schober, the first sign of a positive change in Ruth came the next day when Ruth was able to move her right leg. On Day Three, she adds, Ruth, with the help of a physical therapist, was able to get out of bed. After a 10-day admission in the hospital, she moved over to neighboring Kennedy Krieger Institute for two weeks of rehabilitation. How is she doing today?

“She’s in school and very functional,” says Sun. “She has a little bit of weakness on her right side still, but overall she’s able to do almost everything she did before.”

Schober agrees: “It’s been good. She still has some right-sided weakness, which has affected her right hand, but she is learning how to use her left hand to write and tie her shoes. Her speech is excellent—that came back pretty quickly. Her personality and quirkiness came back, too.”

Ruth’s experience, says Felling, illuminates the need for parents and pediatricians to be well aware of the signs of stroke in children. With an incidence of two to four per 100,000 people, Felling says, pediatric stroke is often underrecognized, delaying diagnosis and precluding tPA treatment for many patients who would benefit from it.

“They often don’t get to the emergency room in the time window to be able to use it,” says Felling. “It is important to spread awareness among physicians regarding how important time is.”