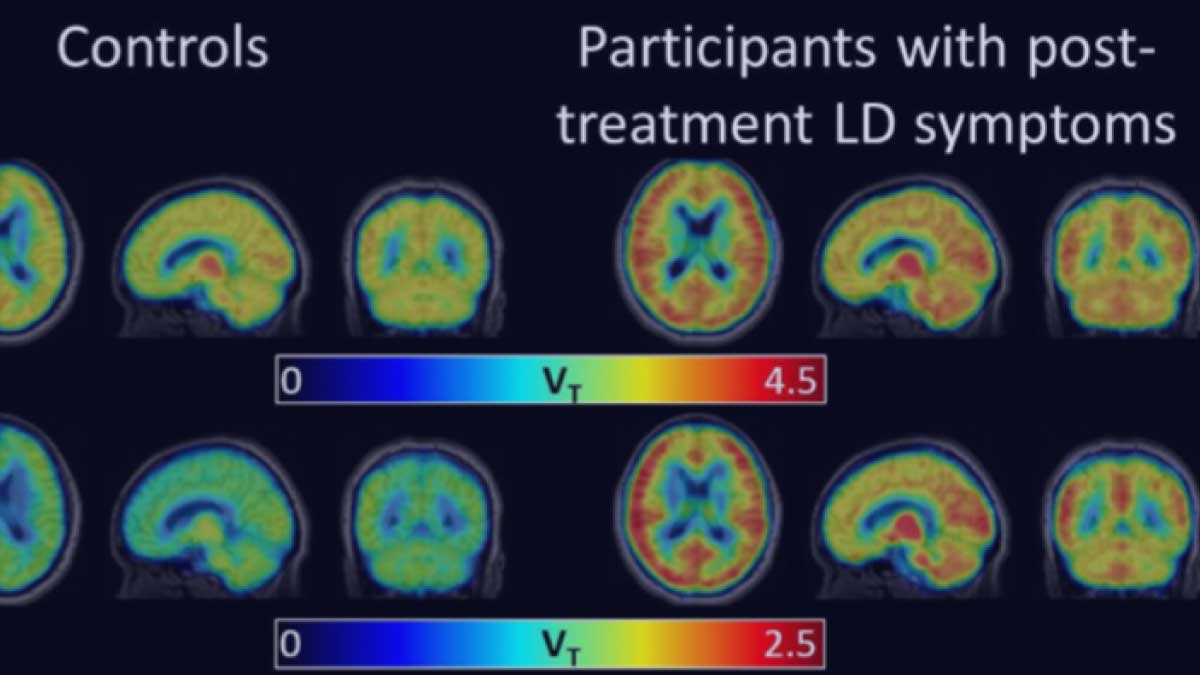 The pathophysiology of post-treatment Lyme disease syndrome (PTLDS) may be linked to overactive immunity including aberrant activity of microglia, the brain’s resident immune cells. This study uses a neuroimaging radiotracer with positron emission tomography (PET) to quantify cerebral glial activation in brains of patients with post-treatment Lyme disease. Results show elevated central nervous system immune activation in patients with PTLDS as compared to controls. More research is needed to determine if a persistent neuroimmune response could be linked to the neuropsychiatric symptoms of PTLDS and whether immune-modulating therapeutic strategies could benefit these patients.

Why was the study done?

Lyme disease is an expanding vector-borne infectious disease, endemic across large regions of the Northern Hemisphere. The Lyme disease spirochetal Borrelia burgdorferi infection is treatable with antibiotic therapy. However, treatment delay portends worse outcome, including the potential for neurologic complications. Even with diagnosis and appropriate antibiotic treatment, approximately10-20% of individuals develop a constellation of symptoms that may include fatigue, pain, sleep disruption, and cognitive difficulties which can be debilitating.

The pathophysiology of post-treatment Lyme disease syndrome (PTLDS) is not well understood. The goal of this study is to measure the aberrant activity of microglia, the brain’s resident immune cells. This study uses the neuroimaging radiotracer [11C]DPA-713 with positron emission tomography (PET) to quantify cerebral glial activation in brains of patients with post-treatment Lyme disease symptoms of any duration compared to healthy controls. The purpose of the study is to determine if patients with PTLDS show elevated central nervous system immune activation.

How was the study done?

This study used the radiotracer, [11C]DPA-713, with positron emission tomography (PET), in a pilot population of 12 well-characterized patients with persistent symptoms following treatment for Lyme disease to test for high availability of cerebral TSPO relative to 19 healthy controls. TSPO is a mitochondrial 18kDa translocator protein that is greatly increased in its expression by activated microglia and reactive astrocytes. Imaging TSPO has proven a useful method to test for hypothesized immune activation in vivo in other neurological conditions.

Every patient’s Lyme disease history was confirmed and characterized through review of medical records and a clinical interview. Patients also completed a standardized assessment of symptoms and battery of neuropsychological tests.

Prior to the PET each participant underwent MRI structural imaging to screen for structural abnormality and delineate anatomical regions of interest. [11C]DPA-713 was delivered via intravenous bolus injection at the beginning of a 90 minute dynamic list mode PET acquisition. The arterial plasma input function was acquired from 25-35 blood samples collected over the duration of the scan, with additional blood sample collection at eight time points for measurement of metabolites.

The 18 kDa translocator protein was quantified in brains of patients compared to healthy controls. Kinetic analysis was performed on the images including cortical (frontal, parietal, temporal, occipital, cingulate) and subcortical (hippocampus, thalamus) regions, and data was compared between patients and controls.

What were the major findings?

What is the impact of the work?

The study shows that [11C]DPA-713 PET can be a promising tool to study cerebral glial activation in PTLDS and could indicate a potential biological link to patients’ cognitive symptoms.

Future studies are needed, including comparative study with other control groups (such as non-infected individuals who share symptoms with the patient group) or longitudinal study of individuals who return to health after Lyme disease will delineate further whether higher levels of TSPO are associated with persistent symptoms after treated Borrelia burgdorferi infection. Future studies of the relationship between higher glial activation in the CNS, systemic inflammatory signaling, and cognitive performance, including neuropsychological deficits and symptoms, with larger clinical PTLDS samples are needed. Future studies should also explore whether immunotherapeutic approaches like those used in other CNS conditions may benefit those with PTLDS.

This research supported by: