The genetic risk score (GRS) is a different kind of genetic test: it doesn’t look for mutated genes that can lead to prostate cancer. Instead, it looks at genetic bits and pieces: single nucleotide polymorphisms (SNPs, pronounced “snips”). “SNPs are minor alterations in the human genetic code,” says urologist Claire de la Calle, M.D. “Individually, SNPs don’t have much of an effect, but when many SNPs are combined, they have been shown to be strong predictors of prostate cancer risk.”

Much of the pioneering work on SNPs has been done by molecular geneticist William Isaacs, Ph.D. at the Brady and by Jianfeng Xu of NorthShore University. Now Brady scientists, with colleagues at NorthShore and Northwestern University, have launched the GenBx trial aimed at validating the GRS in men of various genetic ancestral backgrounds. The GenBx trial is enrolling men with elevated PSA and will compare GRS with prostate biopsy results. “Our aim at Johns Hopkins is to focus on enrolling men of African ancestry,” says de la Calle, who with urologist Christian Pavlovich, M.D., the Bernard L. Schwartz Distinguished Professor in Urologic Oncology, was awarded a Schaufeld Program grant for this project. “So far, the test has mainly been calibrated in cohorts of patients of mostly European ancestry,” says de la Calle. “But it is critical to find better ways to identify high-risk men of African ancestry early on, as Black men are at higher risk of earlier and more aggressive diagnoses.” 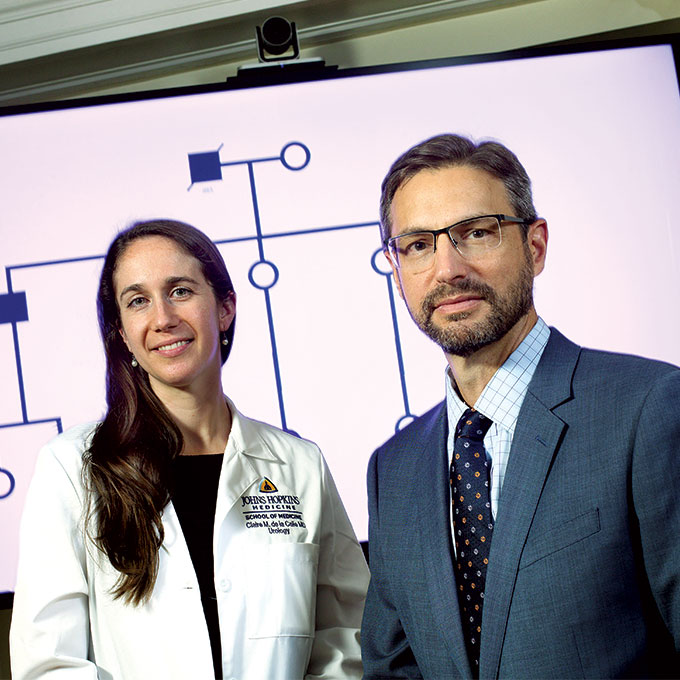 de la Calle and Pavlovich: “It is critical to find better ways to identify high-risk men of African ancestry early on.”
Refer a Patient
International Patient Services
Sign Up for the Clinical Connection E-Newsletter
High-Value Health Care
Learn how we’re improving care and cutting costs for patients
Learn More
Find a Doctor
Stay Up to Date
CME Resources
Back to Top