Proton beam radiation therapy is an FDA-approved treatment modality. Proton beam therapy directs a beam of protons (positively charged subatomic particles) at the radiation target, where they deposit the bulk of their energy in the last few millimeters of their range; tissue beyond the tumor receives very little radiation dose because of the absence of exit dose. Given the physical characteristics of protons (no exit dose), proton beam therapy helps save vital organs that are close to the tumor.

Patient is a 60-year-old woman with postmenopausal woman with a history of FIGO stage IIIC1 (grade 3 carcinosarcoma of the uterus, 75% myometrial invasion (MMI), no lymphovsacular space invasion (LVSI), 2/2 lymph nodes involved. She was treated with total abdominal hysterectomy and bilateral salpingo-oopherectomy with pelvic lymph node dissection and 6 cycles of adjuvant Carbo/Taxol.

Treatment: Given her high grade and aggressive histology, decision was made to use the extended field to cover para-aortic nodes. She was treated with 55 Gy (45 Gy pelvis + 10 Gy boost)

She was treated with proton therapy due to prior radiation to reduce dose to organs at risk.

A 63 year old woman presented with squamous cell carcinoma of the cervix that was metastatic to the para-aortic and pelvic lymph nodes. She completed chemoradiation with external beam to 45 Gy with a pelvic boost to 65 Gy along with weekly cisplatin. This was followed by a brachytherapy boost to the cervix, 700cGy in 1 fraction. She then had five cycles of adjuvant chemotherapy with carboplatin/paclitaxel. She returned to clinic with biopsy proven recurrent disease in an enlarging left iliac node two years later, compressing the obturator nerve. She was started with carboplatin/taxol/avastin.

She received proton therapy in order to minimize dose to organs at risk (OARs). The patient had already showed signs of radiation toxicity with sacral insufficiency. Thus, proton radiation would be able to minimize additional dose to OARs including sacral nerves and bowel. 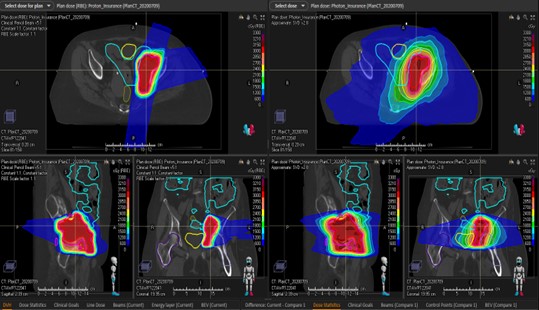 In this case, due to the lymph node pressure on the obturator nerve and the patient’s developing symptoms, obturator sparing using proton therapy was advantageous. Using a three beam technique. 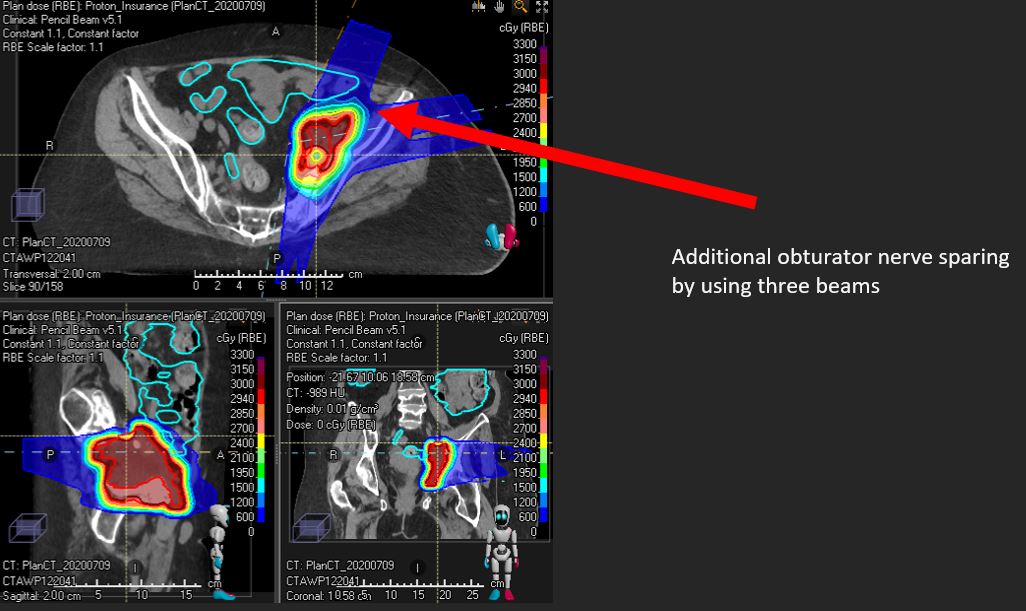 Patient is a 60 y.o. post-menopausal woman with a history of FIGO Stage IB (Grade 1) endometrioid endometrial carcinoma s/p total laparoscopic hysterectomy/bilateral salpingo-oopherectomy and sentinel lymph node dissection. Pathology was significant for 76% myometrial invasion, no lymphovascular space invasion, negative margins, hormone positive with concern for isolated tumor cells vs benign mesothelial cells on ultra-staging for the bilateral sentinel lymph nodes. She then received adjuvant external beam radiation (45 Gy in 25 fractions) to the pelvis and high dose rate brachytherapy to the vaginal cuff (10 Gy in 2 fractions) because of high-risk features including isolated tumor cells, and loss of mismatch repair proteins. She presented with recurrence two years later, in two port sites, one in each the right and left abdomen. She underwent resection of both nodules.

Protons were used for boost after initial photon plan: Right side was treated with 45 Gy + 19.8 Gy; Left side 45 Gy + 14.4 Gy. The use of protons allowed for additional sparing of bowel dose to reduce toxicity due to her prior radiation. 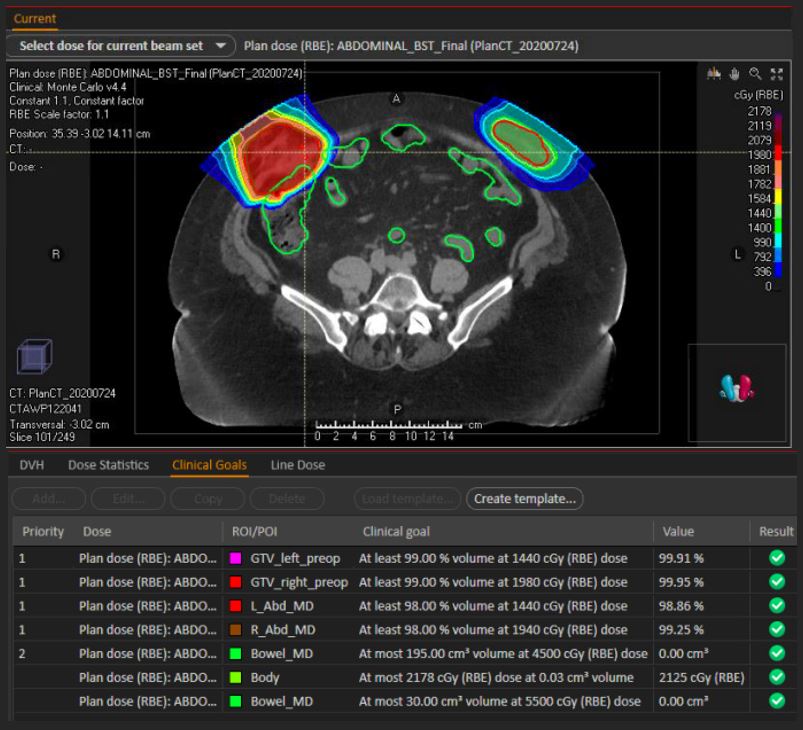 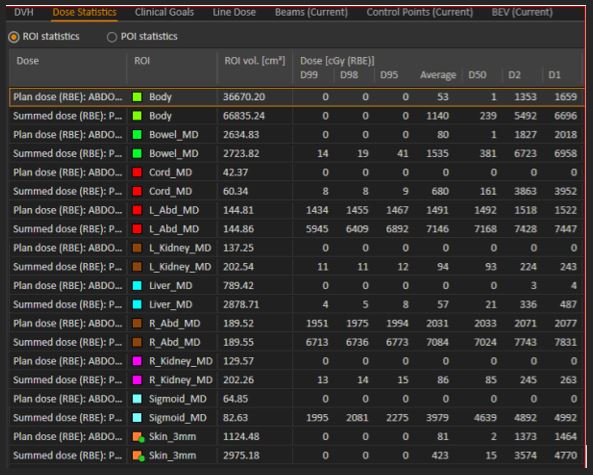 Treatment: She received proton therapy due to her prior radiation for her colorectal cancer in 2007. She was treated with 4000cGy in 20 fractions to the pelvic lymph nodes alone with 2400cGy x 6 fractions vaginal cylinder brachytherapy to the full vaginal length. 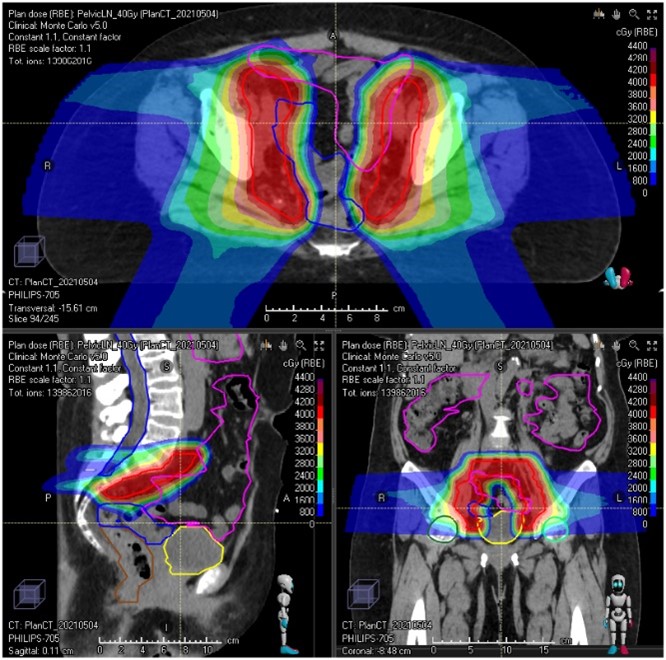 Patient is a 74-year-old woman with a history of multifocal colorectal cancer managed with near-total proctocolectomy (permanent ostomy) with adjuvant chemoradiation to 50.4Gy in 2001 (records unavailable) and a remote supracervical hysterectomy. She presented twenty years later with a 4cm localized endometrioid adenocarcinoma at the vaginal apex.

Treatment: Given her prior radiation plan, proton therapy was recommended to minimize dose to organs at risk. She was treated with an SIB plan (SIB is simultaneous integrated boost, so a smaller volume will get a higher dose per fraction). The pelvic lymph nodes, vagina, parametrium, and ovaries received 40 Gy, the inguinal lymph nodes received 44 Gy, and the gross residual disease at the vaginal apex received 50 Gy. Using protons, we were able to dose escalate in the definitive treatment setting while protecting small bowel as well as the ostomy. 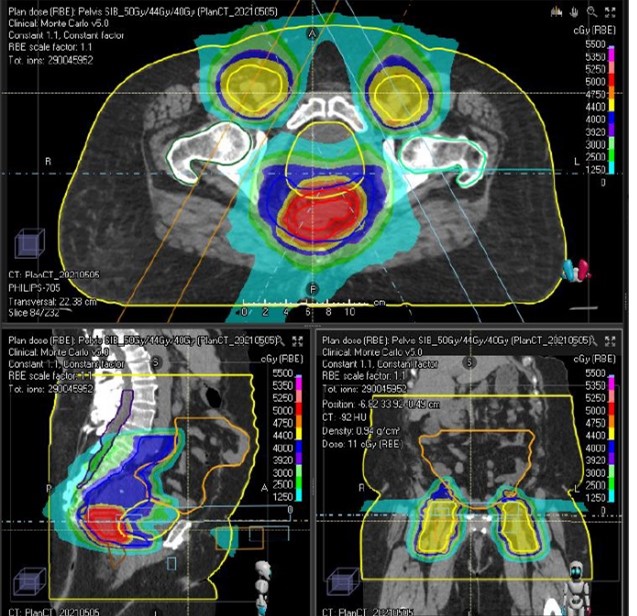