Current National Comprehensive Cancer Network (NCCN) Clinical Practice Guidelines in Oncology note that proton therapy is an effective and acceptable form of external beam radiation. The most modern form of proton therapy, known as pencil beam scanning, has facilitated treatment of complex shapes and targets and revolutionized the utilization of proton therapy for challenging sites across the body. Herein, we review several such prostate cancer cases that were referred for treatment to serve as an example of the potential of proton therapy.

Despite prostate and tumor cytoreduction with several months of neoadjuvant androgen deprivation therapy, planning with traditional photon IMRT in both the supine and prone positions was attempted by his local radiation oncologist.This was unsuccessful due to the patient’s anatomy. Excessively high and unsafe doses were noted to the low-lying sigmoid bowel which approximated the tumor involvement in the prostate and adjacently invaded seminal vesicles.

The patient was referred for consideration of proton therapy where it was noted that all organs at risk including the bowel and rectum were better spared with scanning beam proton therapy as noted in Figure 1.

Figure 1b. Excess radiation dose delivered by the IMRT compared to IMPT plan.

At 3 months, post-operative, his PSA was persistent at 0.2 and rose to 0.3 a few months later. He presented for salvage radiation.

Considering his removed prostate, consequential challenging anatomy and ongoing urinary symptoms and recovery, scanning beam proton therapy was considered. Planning with IMPT was able to better spare all of the adjacent organs at risk including the bladder, small and large bowel, and rectum, as noted in the representative dose color wash Figure 2 (right): IMPT (top) vs IMRT plan (bottom).

A 53 year old male with a family history of prostate cancer in his father and brother, was diagnosed with a favorable intermediate risk prostate cancer, cT1cN0M0, Gleason 3+4=7 (grade group 2) in 4 out of 12 biopsy cores. After extensive discussion of his management options with his local urologist, primary care physician, and radiation oncologist, he also sought a second opinion at the Johns Hopkins Prostate Cancer Multidisciplinary Clinic at Sibley Memorial Hospital.The patient expressed an overwhelming desire to avoid surgery and any other invasive treatments. 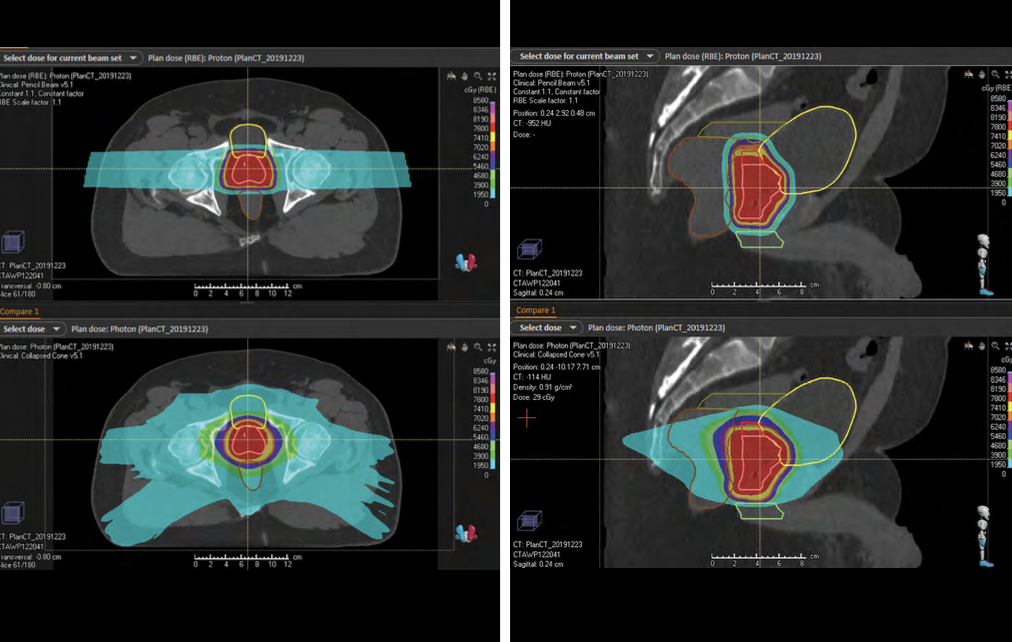 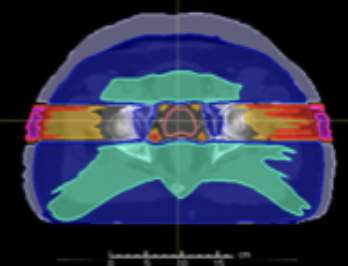 It was anticipated that all of his normal tissues and organs at risk including the rectum would be better spared with scanning beam proton therapy plan (Figure 3), and moreover, considering the excess scatter radiation dose from photon- based IMRT, proton therapy would be the preferred option for this relatively young man to reduce the risk of radiation-related secondary malignancy over the remainder of his lifespan.

The patient received 5.5 weeks of proton therapy for a total of 28 fractions as a solo treatment without systemic therapy.The patient tolerated therapy exceedingly well with minimal effects. He was able to continue working throughout his treatment course

He eventually tolerated proton therapy exceedingly well with minimal anticipated mild urinary and bowel effects that did not require intervention or pharmacologic management. He was able to continue working and exercising throughout treatment and thereafter.

To refer a patient or find out more about the Johns Hopkins Proton Therapy Center, visit hopkinsproton.org.