Pushing Back the Frontier of Curability 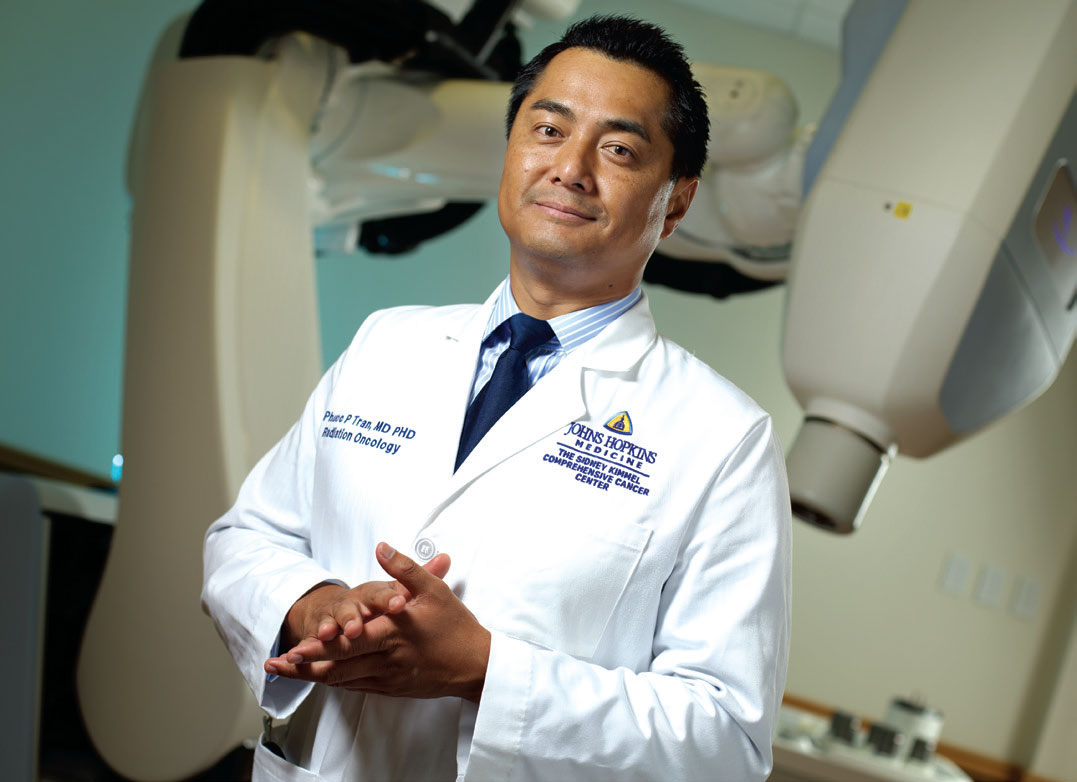 Tran: “It’s like spot welding - focused on a small area, very intense, and it kills all the cancer in that spot.”

Not too long ago, the dividing line between prostate cancer that was considered curable and cancer that might not be was the prostate itself – and whether the cancer was confined to the prostate or had spread beyond it to a distant site. That’s not the case anymore, says radiation oncologist Phuoc Tran, M.D., Ph.D. The frontier of curability is being pushed back.

“Clinically speaking, we prescribe treatments for men with prostate cancer as though prostate cancer presents in clear clinical states,” he says. Think of a Venn diagram: in one circle are “men we believe to have purely localized disease, and they are curable by surgery or radiation.” In the other circle are men with metastatic disease, men who are considered “treatable but not curable with our current therapies. In general, this old treatment paradigm says that men with localized disease benefit mostly from local therapies like surgery and radiation and very little from systemic treatment like hormones and chemotherapy.”

But Tran and Brady colleagues are among scientists who believe these circles intersect. New evidence suggests that in men with oligometastasis – just a few spots of cancer outside the prostate – by treating “not only the primary disease in the prostate or the pelvis, but also the few metastatic lesions, perhaps men can actually live a long time without disease progression and even be cured.”

This is a dramatic and very exciting change in scientific thinking, and it’s happening because of advances in imaging and radiation therapy – particularly the development of stereotactic body radiation therapy (SBRT) or stereotactic ablative radiation (SABR). “SBRT and SABR are highly focused radiation given in an intense fashion,” says Tran. “I tell patients it’s like spot welding—focused on a small area, very intense, and theoretically ablative, meaning it kills all the cancer in that spot.”

Can this new SABR technology plus treatment of localized cancer help men with oligometastatic cancer? “We wanted to test our idea in a rigorous way,” says Tran. “Our Baltimore ORIOLE trial is a randomized clinical trial in patients with oligometastatic prostate cancer (defined as three or fewer metastases).” To be eligible, men must have received either surgery or radiation for the primary prostate disease, and have had no hormonal therapy for their metastatic disease. “They can have had hormonal therapy in conjunction with treatment for their primary disease,” such as a short course of androgen deprivation therapy (ADT) with external-beam radiation therapy, “but not for their metastatic disease.”

Men are randomly assigned either to receive SABR to up to three metastatic sites, or to a short observation period of three to six months – but this doesn’t mean that the men assigned to observation can’t get SABR, Tran states. “The randomization is two to one to SABR, versus a short – no longer than one- to six-month – observation period, after which they can cross over to the SABR treatment.” Other criteria for eligibility: small metastatic sites (less 250 cc) and a PSA doubling time of less than 15 months. “We chose less than 15 months because there are men who have biochemical failure or low-volume metastatic disease with long PSA doubling times, sometimes many years,” explains Tran. “These men probably don’t need any treatment immediately – or possibly, ever. A PSA doubling time of less than 15 months allows us to zero in on patients for whom SABR treatment may make a difference.”

Because of the possibility of long-term remission or even cure, the study has been filling up fast, Tran adds. “We have been enrolling quickly and have 35 men out of 54 total. Thus far, as expected, we have seen only minimal side effects from the SABR, and all men continue to work and are able to resume their normal activities during the short treatment,” which generally lasts less than three weeks. Early results “look promising. The trial also has a number of cuttingedge genetic, blood and imaging studies associated with it that men would not have access to otherwise.”