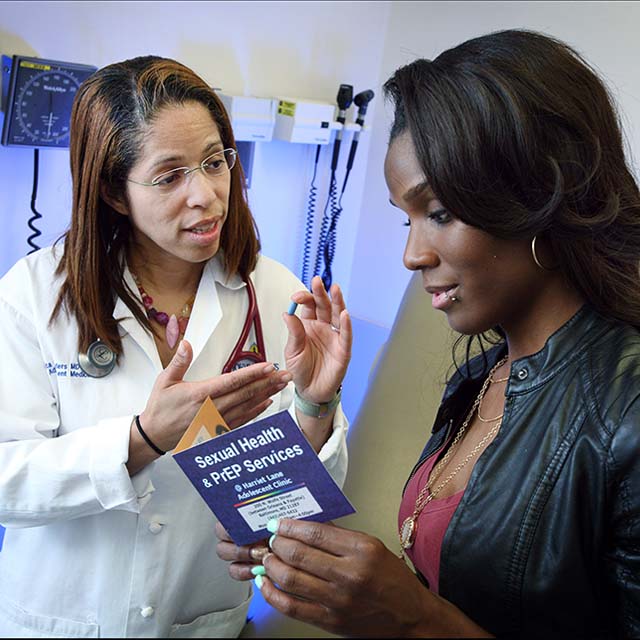 Renata Arrington-Sanders’ office door is a black and white poster from the Baltimore City Health Department featuring a young African-American man sporting tattoos and a fur vest: “Have balls,” it reads. “Get tested.”

The message is salient for Arrington-Sanders, an adolescent medicine and HIV specialist who, during pediatrics training, became interested in working with 15- to 24-year-olds, a time period she views as a “tipping point to either go in th right direction or not.” During an adolescent medicine fellowship at Johns Hopkins, Arrington-Sanders saw a number of homosexual HIV-positive youth. “What struck me was the challenges that they had to deal with, particularly around their sexual identity and behavior, and how not being accepted or being marginalized really creates an environment of negativity toward oneself resulting in adverse health outcomes.”

Inspired by these patients, Arrington-Sanders has focused on helping youth have healthy romantic relationships and creating a safe space where patients can speak freely with their doctor. When early relationship experiences are bad or youth feel vulnerable, that’s most often when outcomes like sexually transmitted diseases or HIV occur, says Arrington-Sanders: “It’s a privilege to have someone share some of the most intimate aspects of their life and to be able to provide them with guidance,” she says. “I’m really blessed to be able to do that on a day-to-day basis.”

Her work includes being a strong and early proponent of pre-exposure prophylaxis, or PrEP, a medication that, if taken daily, can reduce one’s risk for HIV by up to 90 percent. Despite its efficacy, uptake for PrEP has been slow among young African-American gay men—the very population at highest risk for developing HIV. The reasons are several, she says, including a persistent sense of medical mistrust in the community: “There’s a sense of ‘I need to wait a while and see how this goes to make sure it’s safe.’ Unfortunately for some individuals, seeing how it goes for a while may be too late. They may end up being HIV-positive because of the network they’re in.” In addition, some providers may not know about PrEP or may not feel comfortable prescribing it; patients may not disclose their sexual orientation to their providers; and insurance only covers the medication for those ages 18 and up.

Beyond her own research about PrEP usage and attitudes, Arrington-Sanders is part of a citywide program, funded by the federal Centers for Disease Control and Prevention, to get more patients engaged in PrEP . Through the city health department-directed effort, trained community health navigators from Baltimore engage youth at risk for HIV—including young men who have sex with men and transgender women of color—to come to clinics including Johns Hopkins for PrEP counseling and prescriptions. The health department also started a program called Baltimore in Conversation, in which locals share their stories of accessing health care and HIV prevention. Arrington-Sanders participated in the first program, discussing her experience as a health provider.

“My overall goal is to create a method to really help these youth develop healthy lives,” she says. “As an adolescent medicine specialist, I just want to see them succeed.”