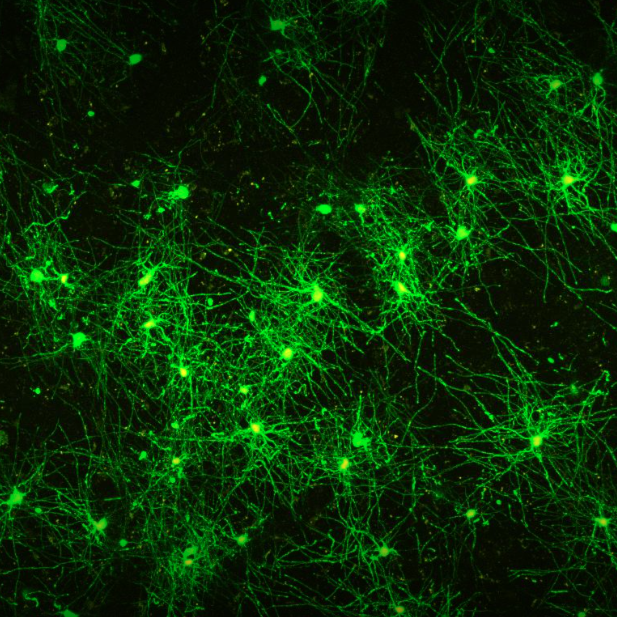 If you could teach a computer how to do something, what would you teach it? How to make your favorite meal? How to complete your hardest tasks at work? At Johns Hopkins, neuroscientists are teaching computers how to build replicas of cells in the brain with complete accuracy — all viewable from a virtual reality headset.

The goal, says neuroscientist Dwight Bergles, Ph.D., is to understand the organization, shape and interplay between neurons and glial cells, nervous system support cells. Using high-resolution imaging in the living brain, he aims to develop better therapies to treat diseases such as multiple sclerosis (MS) or traumatic brain injury.

Neurons, the electrical conducting cells of the nervous system, are surrounded by a fatty layer of insulation called a myelin sheath, which helps electrical signals shoot from one neuron to another. The insulating myelin is created by other cells in the brain, called oligodendrocytes.

When myelin is destroyed — as in diseases such as multiple sclerosis — neurological problems, such as impaired movement and cognitive function, occur.

Bergles focuses his research on oligodendrocytes, and the abundant progenitors that give rise to these cells, in efforts to understand the biological underpinnings of so-called “demyelinating” disorders. He recently received the Barancik Prize for Innovation in MS Research by the National Multiple Sclerosis Society for his research.

In this Q&A, Bergles chronicles his journey towards using computer technology for neuroscience research and how such technology can improve scientific rigor.

This interview was edited for length and clarity.

What led you to study oligodendrocytes and myelin?

It was serendipity, like a lot of science is. In graduate school, I started to look at the electrical properties of glial cells — supportive cells that surround nerve cells in the brain. At the time, glial cells were thought to be kind of static, rather uninspiring cells that were only used to help the more exciting and dynamic neurons.

To study these cells, I used electrodes to record their electrical properties in isolated brain tissue. We didn't have the sophisticated tools we have now, such as genetically altered, transgenic mice, in which fluorescent proteins label different cell types so we would manually hunt for different cells. I occasionally encountered one type of glial cell that had unusual properties, in that it shared features of both neurons and glia. Remarkably, these strange glial cells showed evidence of forming connections with neurons through synapses, the spaces between neurons, where rapid chemical communication happens. At the time, synapses were thought to be reserved just for neuron-to-neuron communication. Finding these connections spurred my interest in understanding more about these cells and their roles in the brain.

Then, you discovered that these “glial” cells were precursors to oligodendrocytes. Correct?

The discovery that some glial cells form synapses with neurons was heretical and raised many new questions.

Where are these cells found? What did these glial cells do? What is their fate?

So yes, many years of hard work led to the realization that these cells were actually progenitors, or precursors, for oligodendrocytes, the myelin-forming cells found in the brain and spinal cord.

The realization that neurons are interacting with the progenitors for myelin-forming cells in a very distinct way started my fascination with oligodendrocyte formation and neuron myelination.

How were you studying oligodendrocytes before venturing into virtual reality and computer learning?

It has been a long, technological journey. It began with a simple contrast-enhancing light microscope that allowed us to see different cell bodies in brain tissue. However, we didn't know what these individual cells were.

In some cases, based on size or location, we could say, ‘Oh, this is probably a neuron,’ or ‘Maybe this is a glial cell.’

So we used whole cell recording, where we record the activity of the cells by placing an electrode into them. We could even put a little bit of dye in the electrode to visualize the complete structure of the cell. Then, we could use antibodies that recognized specific cell types to show that it was this or that kind of cell.

When we cut the tissue into sections and examined the glial cells we recorded from, they often looked pretty strange.

At the time, these features were unusual and really confusing, as other neurons and glial cells did not do this. We now know that these cells are highly dynamic — they constantly move through tissue, divide, and respond to injury by becoming highly polarized and migrating to the injury site to make a scar. So, only much later did it become clear that the highly polarized cells we saw after recording reflected cells that were responding to local tissue injury.

What are the challenges of using these research techniques?

To better understand the dynamics of these progenitors and the oligodendrocytes they mature into, we developed transgenic mice to label these cells with fluorescent proteins. Then, we used an advanced form of microscopy that allows us to see just these cells glowing in a living brain. By collecting images of these cells over days and weeks, we were then able to watch what they do while the brain is developing, while it is aging, and after it has been injured.

However, each image is only one narrow optical slice of tissue, so we have to examine a whole stack of images to trace a biological process across all the different stacks, or areas of the tissue. And, if we want to follow the cells over time, we have to go back to that same area of the brain and locate each cell days or weeks later. This is very labor-intensive and challenging, especially because neurons, oligodendrocytes and other cells are all jumbled together in the brain. Furthermore, these cells are shapeshifters, which move to new positions and change their morphology.

Another challenge of studying oligodendrocytes and myelin in the central nervous system is that the organization of myelin, particularly within the gray matter of the brain, is very diverse.

One cell can have a different pattern of myelin from another, and the patterns of myelin vary across the brain’s cortex. Furthermore, different cortical regions have different densities of oligodendrocytes and different amounts of myelin.

We’re just starting to understand what this means in terms of the function of the nervous system and its ability to repair itself. But, as you can imagine, we're talking about thousands of oligodendrocytes — even within a small area — and each cell can make more than 50 individual myelin sheaths on different cell types. It is painstakingly slow work to try to analyze their features using manual tracing approaches.

So, we began developing approaches that help us to identify, trace the structure and track the movements of these cells.

This is where virtual reality and computer learning came in?

Exactly. My lab started using a virtual reality system, which takes all of the individual images and projects them together in three dimensions.

You put on the Oculus headset — just like you’d play a video game — and now you can see a section of the brain in three dimensions. You can see the cells, all of their processes and each of the myelin sheaths that each cell forms. This enables us to trace the cells more accurately and faster.

The next step we are working on is to automate this analysis. With help from Jeremias Sulam, in the Department of Biomedical Engineering at JHU, graduate student Tiger Xu, in my group, has used neural networks to train the computer to recognize and reconstruct individual oligodendrocytes. We first identify and trace individual cells, and then tell the computer what we're looking for. We say: This is what a myelin sheath or oligodendrocyte looks like in these images. Go find each one, and tell us where it is and what it looks like. The more traces of oligodendrocytes we give the computer, the more accurately it learns to quickly recognize oligodendrocytes and their sheaths within complex networks.

Our goal is to fully define myelin architecture in the brain, to understand why oligodendrocytes produce the myelin patterns that they do, and how these distinct patterns influence the processing capabilities of neural circuits.

What are the benefits of using virtual reality and computer learning?

Using these computational approaches, we speed up the analysis — tracing that once took days and weeks can now be done in hours. This approach also reduces possible bias. One person might trace a bit differently from another, leading to unanticipated variation in the data, while the computer does it the same every time. The computer also does a better job of seeing very dim cells deeper in the brain, so we can identify more cells during each experiment.

These methods are providing an unprecedented view of the morphology, the size and shape of oligodendrocytes and the patterns of myelin formed on different cell types of the central nervous system. They allow us to start to answer questions such as what happens when someone has a demyelinating disease or injury. Are all neurons able to restore myelin equally, or is it easier for our bodies to replace myelin along certain types of neurons? This has really important implications for people recovering from diseases such as MS, or traumatic injury to the central nervous system.

Also, artificial-intelligence-guided analysis often identifies features that we didn't appreciate. For example, by measuring the size of the oligodendrocyte cell bodies, this analysis technique can tell us if the cell was formed recently, or whether it is about to die, and what confidence it has in making this assessment. By combining data over much larger areas, it can also identify structures and patterns that we didn't initially see.

When we use programs like this, we have the ability to give the program to other research teams, so that they can use it to analyze their datasets. This improves the reproducibility of the techniques, allowing datasets to be compared between labs. It also accelerates the research, so that we can more quickly understand how oligodendrocytes and their progenitors behave under different circumstances — studies that we hope will help us develop new strategies to enhance brain repair.