Read About the Research You Have Helped Make Possible. 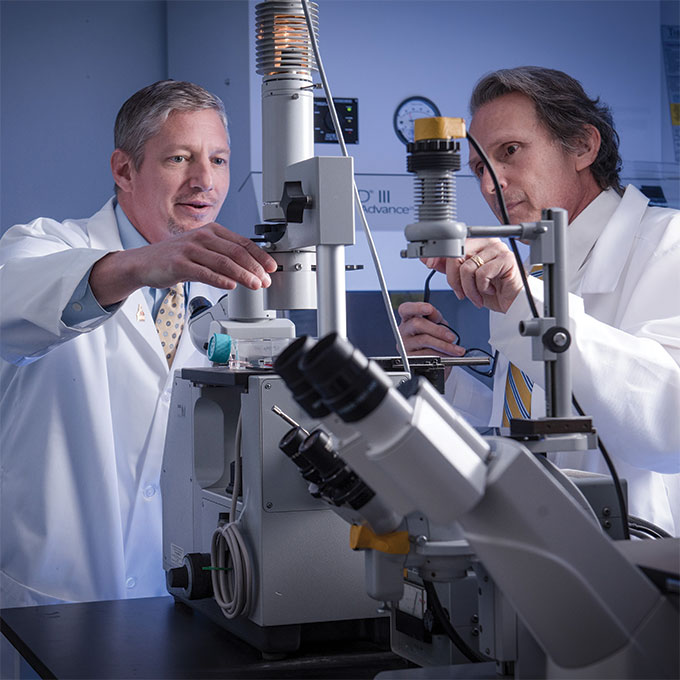 How important is seed money? Priceless! Many of the scientists featured in this issue of Discovery jump-started their research careers with awards from the Patrick C. Walsh Prostate Cancer Research Fund. This great resource owes its existence entirely to patients: Patients made it happen! Patients of Patrick Walsh, M.D., who wanted to give back and help others who are going through prostate cancer. Patients and friends of the Brady who wanted to invest in the future, to help their sons and grandsons and those who love them. Since its inception in 2005, this remarkable Fund has awarded millions of dollars to Johns Hopkins scientists in every discipline with good ideas worth pursuing. Their research has produced better ways to detect, treat, and prevent prostate cancer. Applications are reviewed by a Scientific Advisory Board comprised of noted Hopkins scientists and lay members. This year’s awards are hot off the presses! We look forward to reporting on these exciting research projects as they unfold. Remember: without you, their work wouldn’t be possible!

The Beth W. and A. Ross Myers Scholar,

Departments of Oncology and Pathology

The Virginia and Warren Schwerin

The Carolyn and Bill Stutt Scholar,

The R. Christian B. Evensen Scholar,

Departments of Urology and Oncology

What’s more accurate at predicting a man’s prostate cancer risk than family history? His genetic risk score – obtained by looking at small variations in human DNA, called single nucleotide polymorphisms (SNPs, pronounced “snips”)? “We want to understand how individual genetics can influence the risk of a prostate cancer diagnosis,” says urologist Christian Pavlovich, M.D. “Unfortunately, most of the work in this area has been done in men of European ancestry.” Building on fundamental discoveries made by his research group, Pavlovich plans to extract DNA from stored blood samples from Black men who underwent prostate biopsy at Hopkins and consented to the storage of their samples. “We will compare this with clinical data to determine how genetic risk correlates with diagnosis of prostate cancer, and features of aggressive cancer on prostate biopsy or imaging.”

“Lighting Up” the Nerves Responsible for Erection During Surgery

The nerve-sparing radical prostatectomy is more precise than ever – but even so, many men struggle with erectile dysfunction, and “preservation of the nerves remains a challenge,” says urologist Nirmish Singla, M.D., M.Sc. If only there were a way to shine a spotlight on these nerves! Singla and his research group have come up with the next best thing: a compound that binds specifically to nerves that will “light up” with fluorescence during robotic prostatectomy. “We also developed an approach to administer the compound directly at the site, to enable rapid visualization of the nerves in real time during surgery,” he says. With this award, “we hope to develop and optimize a clinically translatable strategy to identify the nerves responsible for erections during robotic prostatectomy. We hope this work will expedite a first-in-human clinical trial of fluorescence-guided, nerve-sparing radical prostatectomy.”

Immunotherapy doesn’t work nearly as well in prostate cancer as it does in other forms of cancer. Scientist Jelani Zarif, Ph.D., M.S., has identified a new target, “a protein that we found on the surface of cancer cells and immune cells in prostate cancer.” The goal is to reverse tumor resistance to immunotherapy – first in “knockout mice” and then in human prostate cancer biopsy samples. They will look at the expression of this protein before and after treating the cells with Nivolumab, an immunotherapy drug. “We hope to enhance the effectiveness of immunotherapy in metastatic castrate-resistant prostate cancer, which is responsible for the deaths of more than 30,000 men each year in the U.S.”

Why Do Some Patients Respond to BAT?

Bipolar androgen therapy (BAT) uses something against metastatic castrationresistant prostate cancer (mCRPC) that sounds counterintuitive: high-dose testosterone. In small studies, some men have responded dramatically to BAT. One possible reason why: “We have recently published a finding suggesting that in patients who respond to this treatment, BAT is able to activate the immune system,” says scientist Sushant Kachhap, Ph.D. Now, “our goal is to understand and define the molecular features of the tumors that respond dramatically to BAT therapy.” Previously, Kachhap and his research team found that androgen receptor (AR) activity controls the cancer’s response to BAT. To learn more, using human prostate cancer tissue samples, “we will employ an innovative labeling strategy to isolate and identify key regulators of AR function in prostate cancer. This would explain how AR reprograms the genes in response to BAT to bring about growth inhibition and immune cell activation.” The team hopes to “uncover novel protein markers of BAT response which can stratify the patients who will respond to BAT, and also to combine BAT with immunotherapy to achieve a better outcome.”

Genes called long non-coding RNAs (lncRNAs) have emerged as important biomarkers of prostate cancer – most notably, PCA3, found in urine and used to help determine the need for a prostate biopsy. But scientists still don’t know exactly what these lncRNAs do in prostate cancer, says scientist Shawn Lupold, Ph.D. “It is critical to delineate the biologic mechanisms of these lncRNAs, because they may uncover new pathways and targets that contribute to prostate cancer progression and therapeutic resistance.” With this award, Lupold will apply cutting-edge tools (called CRISPRa and CRISPRi) to activate and repress three lncRNAs (PCA3, PCAT-1, and SChLAP1) in human prostate cancer cell models. “The ultimate goal of this proposal is to delineate the role of each lncRNA in prostate cancer cell proliferation, invasion, migration, therapeutic resistance, and gene regulation.”

Studying a Variant of HOXB13 in Black Men

HOXB13 is a prostate cancer gene with two important variants: One, G84E, is found in men of European ancestry. The newly discovered second variant, X285K, is linked to a risk of aggressive prostate cancer in men of African ancestry. “X285K is quite possibly the most important marker identified to date for lethal prostate cancer risk in Black men,” says Jun Luo, Ph.D. With this award, Luo will study the X285K variant in prostate cancer patients in Jamaica, a country with a high rate of prostate cancer, in pilot studies in collaboration with doctors in Jamaica. “Our findings will be used as preliminary data in NIH grant applications that will sustain this collaboration for long-term studies. Knowledge on these heritable risk variants will benefit all men and their families, especially given the recent interest in using HOXB13 as a therapeutic target.”