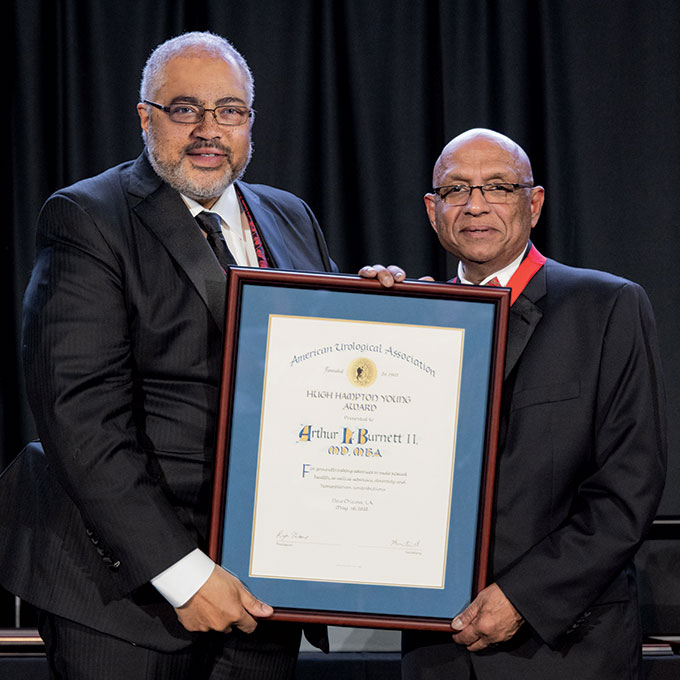 Arthur L. Burnett II, M.D., M.B.A., is the 2022 winner of one of the highest honors bestowed by the American Urological Association (AUA): the Hugh Hampton Young Award. Burnett was recognized for his “groundbreaking advances in male sexual health, as well as advocacy, diversity and humanitarian contributions.” Burnett is one of several former Brady residents or faculty to receive this prestigious award since its inception in 1971. Previous Brady recipients include Thomas A. Stamey, Frank Hinman, Jr., William J. Catalona, Mani Menon, Robert Gibbons, David M. Davis, and Patrick C. Walsh. The award was presented by then-AUA President Raju Thomas, M.D.

Burnett specializes in sexual medicine, major pelvic reconstruction, and the management of cancers of the genitalia and lower urinary tract, including prostate cancer. He also directs an active basic science laboratory. One of his major research contributions was uncovering the role of nitric oxide in erection – a discovery that led to the development of Viagra and other drugs. Burnett also founded and leads UroMissionsWorks Inc., a nonprofit organization that provides educational services for urology trainees in underserved populations worldwide.

Patrick C. Walsh, M.D., the University Distinguished Service Professor of Urology, received The Joseph A. Smith, Jr. Mentorship Award from the Society of Urologic Oncology. This award was established in 2020 as an annual keynote address to be delivered as a tribute to Dr. Jay Smith, who embodied the spirit of mentorship in the field of urologic oncology. Walsh is the second recipient of this award. During his 30 years as Director of the Brady, he oversaw the training of 62 residents: 87 percent went on to careers in academic medicine, and 23 of them became Chairs of major academic departments. In addition, his influence has shaped the entire field of Urology, especially in the care of patients with prostate cancer.

Sean Fletcher, M.D., received the prestigious Residency Research Award (a $10,000 prize) from the American Urologic Association for “Evaluating Use of a Genetic Risk Score in a Diverse Population to Improve Risk Assessment for Men on Active Surveillance.” Fletcher has been mentored during his research year by urologist Christian Pavlovich, M.D., and molecular geneticist William Isaacs, Ph.D. 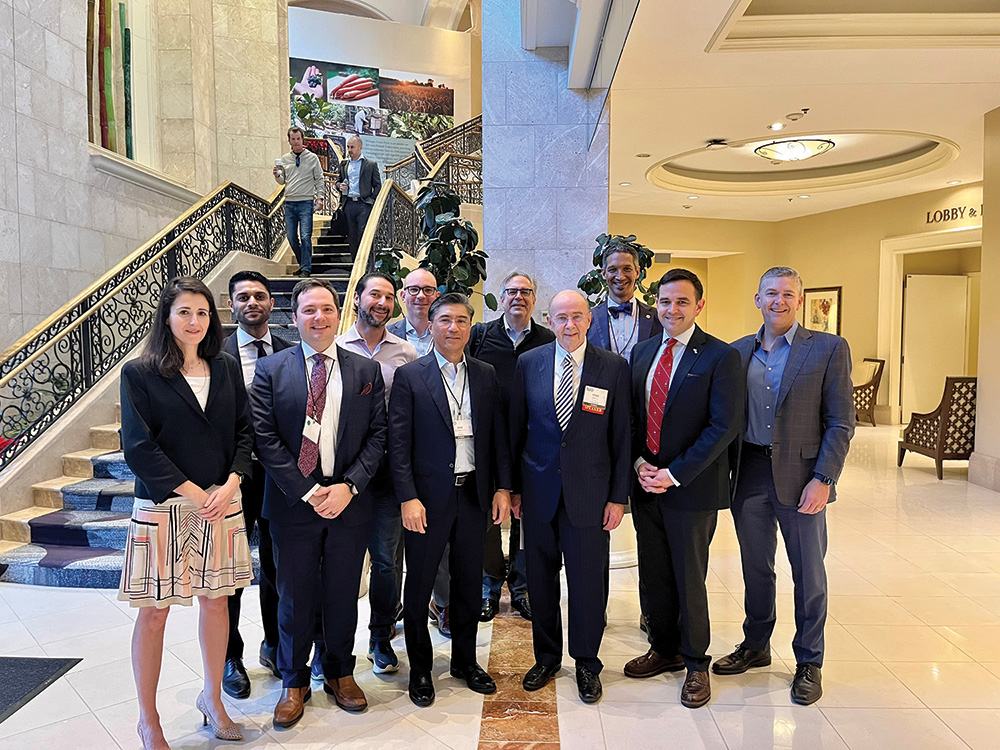 Patrick Walsh with former Brady faculty, residents, and fellows at the annual meeting of the Society of Urologic Oncology, where he was recognized for his contributions to mentorship.

Shawn Lupold, Ph.D., the Catherine Iola and J. Smith Michael Distinguished Professor of Urology, has been elected President of the Society of Basic Urologic Research, a respected U.S.-based society with 600 active members in the U.S., Europe and Asia

Mohamad Allaf, M.D., the Jakurski Family Director and Professor, has been elected to the most prestigious urologic society in the world, the American Association of Genitourinary Surgeons, a highly select group of leading academic urologists.

Urologist Marisa Clifton, M.D., Director of Women’s Health at the Brady, has been named the Associate Chief Medical Officer of the Johns Hopkins Hospital.

Urologist Brian Matlaga, M.D., M.P.H., Director of the Stephens Center for Stone Disease at the Brady, has been named the Executive Medical Director of Johns Hopkins International and Executive Vice Chair of the Brady.

Pediatric urologist John Gearhart, M.D., the Robert D. Jeffs Professor, has been elected President of the Society for Pediatric Urology Surgeons, the most prestigious pediatric surgical society in the world, with only 25 invited members and limited to 10 from North America. This year the Brady will host the annual meeting.