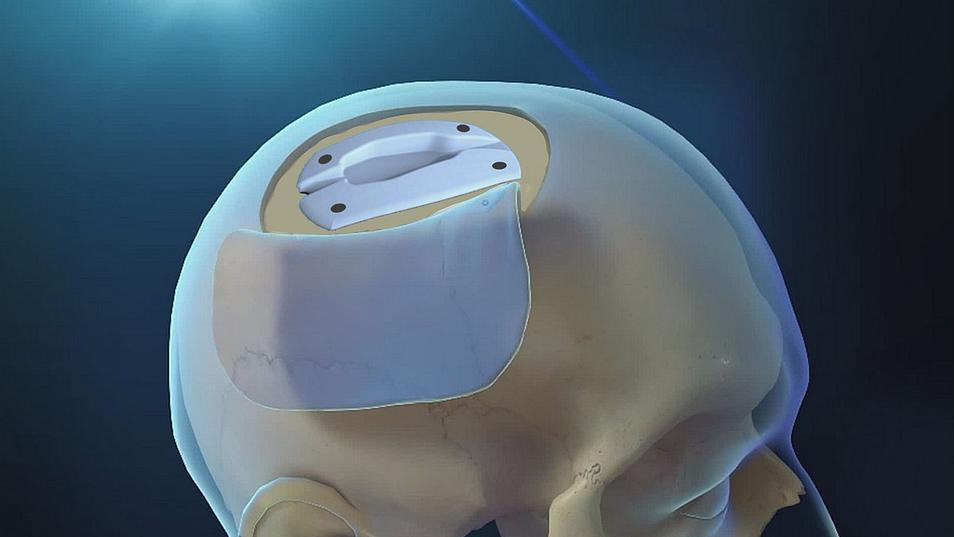 A graphic showing the placement of a valve-agnostic cranial implant (VACI) in the small space between the scalp and skull. The “undercover” device is used to cradle a shunt for removing the excess cerebrospinal fluid caused by hydrocephalus, thus relieving dangerous pressure on the brain. Credit: Division of Neuroplastic and Reconstructive Surgery, Johns Hopkins Medicine

It’s slightly shorter in length than a credit card and only as thick as a stack of seven pennies, but the medical device known as the valve-agnostic cranial implant (VACI) has proven large in its quality-of-life return for adult patients with hydrocephalus, a dangerous brain swelling. The team that created the VACI, led by Johns Hopkins Medicine researchers, recently announced preliminary findings from a multicenter clinical trial that showed — when compared with traditional shunts used to remove the excess cerebrospinal fluid (CSF) associated with hydrocephalus — the device successfully treats the condition with fewer complications, enables easier maintenance and monitoring without follow-up surgery, and gives the patient a more normal appearance.

The results are published in the October 2020 issue of The Journal of Craniofacial Surgery.

According to the National Institute of Neurological Disorders and Stroke, hydrocephalus is an abnormal buildup of CSF — the clear, colorless liquid that protects and cushions the brain — circulating in the brain’s cavities (ventricles). Hydrocephalus occurs when the normal flow and absorption of CSF is blocked, leaving the excess fluid to widen and swell the ventricles. This puts pressure on the brain and keeps it from properly functioning, leading in turn leading to neurological damage and, in severe cases, death.

Hydrocephalus is most commonly treated in adults by implanting a 1-inch-thick shunt device onto the skull and draining the excess CSF through a tube into either the chest cavity or abdomen, where the fluid is absorbed. However, the traditional shunt — a device that basically has not changed in design since its development over 60 years ago — has a high risk of complications, such as skin breakdown, infection and long-term scalp pain; typically requires multiple surgeries for repair or replacement throughout a patient’s lifetime; and forms a noticeable bump that many patients find aesthetically unpleasing.

“Our team knew there had to be a better solution, so we created the VACI, a pre-molded, computer-designed cranial implant that cradles a shunt invisibly within the 4 to 5 millimeters of skull space between the scalp and the brain,” says Chad Gordon, D.O., director of neuroplastic and reconstructive surgery, and professor of plastic and reconstructive surgery at the Johns Hopkins University School of Medicine. “The recent clinical trial was conducted by surgical teams at various institutions to determine if the VACI could improve patient safety and minimize the complications often seen with traditional shunts.”

In the trial, 25 adult patients with hydrocephalus — 14 women and 11 men ranging in age from 22 to 84 — were fitted with the VACI at four medical institutions. The patients were monitored for an average of 13 months with 23 (92%) reporting no major scalp or shunt-related complications. One patient experienced a scalp wound over a catheter away from the device and another developed a CSF infection. Neither of these complications were related to the VACI.

“Based on its successful performance, we believe that the VACI is a newfound weapon against neurosurgical-induced deformities, postoperative complications and suboptimal surgical outcomes when treating adult hydrocephalus,” says Gordon.

The VACI, now known by its trade name InvisiShunt, was first used in a patient in 2018. The device and the surgical procedure for its implantation are part of a new medical discipline being pioneered by Gordon and his Multidisciplinary Adult Cranioplasty Center team to use the cranial bone space — a field they have dubbed “neuroplastic and reconstructive surgery.”

The team’s other achievements include the first-ever cranial implants with: (1) closed-loop direct brain neurostimulators for treating epilepsy, and (2) a “smart” wireless biosensor for continuous monitoring of pressure inside the skull after bone removal to relieve traumatic swelling.

“Both eliminate the risks associated with placing bulky devices under the scalp, thereby making the procedures safer and better tolerated by our neurosurgical patients,” says Gordon.

Gordon is co-founder of Longeviti Neuro Solutions, which manufactures and markets the InvisiShunt under an arrangement approved by The Johns Hopkins University. Both Gordon and the university are entitled to royalty distributions for the technology. Two other authors, Judy Huang, M.D., and Erol Veznedaroglu, M.D., own stock in the company and serve as a paid consultant, respectively.