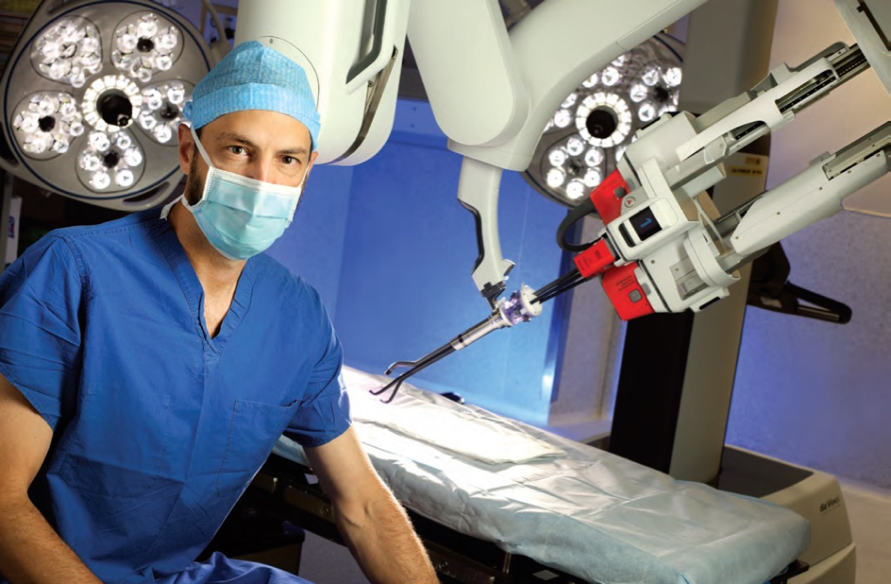 Pavlovich: For men in AS who go on to need treatment, “we continue to push the envelope and try to make it even better, with even fewer side effects.”

“It’s not just, ‘Your PSA is now 4, it used to be 3,’ but, ‘there’s an approximately 17-percent chance that you are harboring more aggressive cancer.”

What’s the best course of treatment for men with localized prostate cancer? That’s actually a trick question: it depends on the individual patient, there are several good choices – and urologist Christian Pavlovich, M.D., the Bernard L. Schwartz Distinguished Professor in Urologic Oncology, is working to expand the range of options even further.

Pavlovich is the new Director of the Prostate Cancer Active Surveillance (AS) Program, a job originated and held for many years by renowned urologist H. Ballentine Carter, M.D., who retired last year. “My goal is to keep our AS program robust, innovative, and forward-thinking,” says Pavlovich. Some exciting projects on the horizon include:

A personalized medicine approach to AS: “The longer we follow men on AS, the more we learn about some of the finer points of monitoring their prostate cancer,” says Pavlovich. In addition to a yearly rectal exam and repeat biopsies every two to five years, men in The Brady’s AS program – more than 1,500 since the program launched – get their PSA checked every six months. What do Pavlovich and colleagues do with all that information? They look at the bigger picture: PSA kinetics is the study of the complex variability of PSA over time. “PSA itself is not a good trigger; just because it hits 8 or 10 doesn’t mean cancer has progressed. We don’t have a hard and fast PSA threshold, or PSA velocity (rate of change over time) threshold, to trigger recommendations for biopsy or treatment. What has been most predictive in AS is PSA density (PSA divided by prostate volume) and the complex assessment of PSA kinetics.”

Pavlovich and colleagues are working on an “Active Care Tool”, a machine learning algorithm generated from the data of many men in AS who had radical prostatectomy at Hopkins. The Active Care software was developed several years ago, “but we are in the process of refining it. We hope to make it even more helpful and accurate in its predictions for men on AS, and then ideally to roll it out for other AS programs as well.” How does it work? Let’s say you are in AS, and have been for several years. All of the data you have generated – from multiple biopsies, results of MRI, PSA tests – can be used to predict what’s happening with your cancer. Do you need another biopsy? The program compares your results with those of other men who have been in AS and ultimately had a prostatectomy. “It’s not just, ‘Your PSA is now 4, it used to be 3,’” says Pavlovich, “but, ‘there’s an approximately 17-percent chance that you are actually harboring more aggressive cancer.’ If we can confirm the accuracy, I would like to design a clinical trial using these predictive analytics to guide safer AS.”

Improving surgery: Many men who enroll in AS go on to have their cancer treated, and for these men, Pavlovich is working to make surgery safer and even less invasive. “My expertise is in extra-peritoneal robotic prostatectomy,” he explains. “I do not operate in the peritoneal cavity at all,” but about a centimeter or two below that, “in the retropubic space where Dr. Walsh initially described the operation and where there’s no risk of abdominal complications.” Many of his surgical patients are at increased risk for abdominal surgery, including men with Crohn’s disease, previous inguinal hernia repair other abdominal surgery, with possible abdominal scar tissue.

For these surgeries, Pavlovich makes the five dime-sized incisions within a very small area for safe removal of the prostate. However, with urologist Mohamad Allaf, M.D., Pavlovich is also performing a “single port” method of robotic prostatectomy, using a new Da Vinci robot that requires only one small incision. “We put the port right on top of the prostate and take it out with minimal side effects to patients; we do not have to manipulate the bowel and often never even see it.”

These refinements to the operation invented by Patrick Walsh 40 years ago are exactly in the tradition established by Walsh himself of “tweaking” the operation,” says Pavlovich. “We continue to push the envelope and try to make it even better, with even fewer side effects.”

Biomarkers: Pavlovich’s research also includes work with Brady scientist Jun Luo, Ph.D., and others, to find better biomarkers for prostate cancer. Most recently, Pavlovich and Luo performed molecular urinalysis to detect prostate cancer cells in the urine of men with an elevated PSA. This work was supported with a grant from the Patrick C. Walsh Prostate Cancer Research Fund, Pavlovich points out. Through that endowment, Pavlovich was “the Bernard Schwartz Scholar, and now here I am again with Mr. Schwartz’s philanthropy supporting me as Distinguished Professor.”