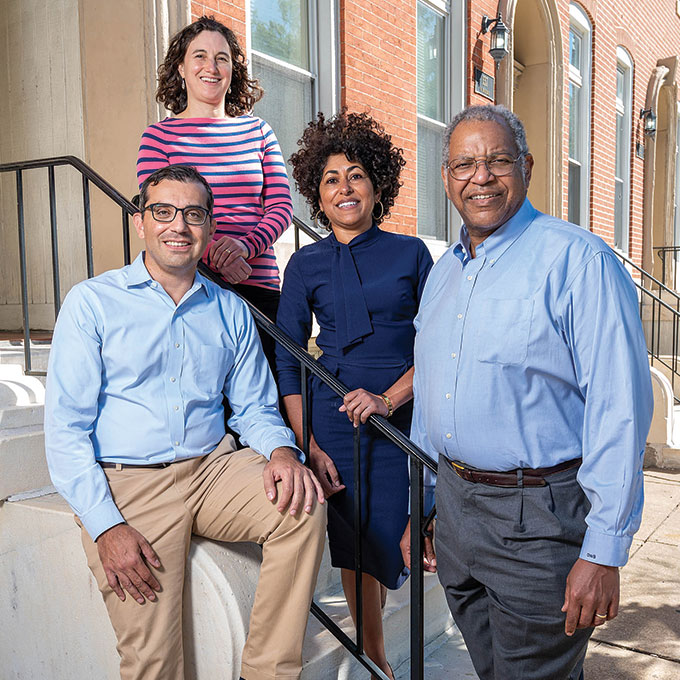 Last year in Discovery, we introduced an exciting new initiative, the Schaufeld Program for Prostate Cancer in Black Men, which addresses a critical issue: Black men are more likely to develop aggressive prostate cancer, and to die of it, than other men. Many factors contribute, including genetic and environmental causes and disparities in health care, such as lack of early detection.

This program was established through the generosity of Brady philanthropists. It began with a $5 million commitment from the Fredrick D. and Karen G. Schaufeld Family Foundation and has been strengthened by recent partnerships, including a new $1 million investment to create an endowed research fellowship.

In its first year, the program established collaborations with leading universities; named five Schaufeld Scholars (post baccalaureate students who contribute to the program’s research and community outreach programs); and funded research projects aimed at understanding the mechanisms of prostate cancer, whose findings will not only help Black men, but all men with this disease. The program has funded four important research projects so far:

“We have been characterizing differences in a mark on the DNA called methylation in prostate tumors from men of African descent, comparing them to men of European ancestry,” says Lotan. Already, the research has brought to light an inflammatory gene called IFITM3, which is expressed at higher levels in Black men. “We are looking to see whether this correlates with inflammatory cell numbers in the prostate tumor. This may have implications for response to therapies such as immunotherapy.”

Luo’s lab is investigating the use of a urine test to detect prostate cancer, collaborating with Howard University investigators to increase enrollment of Black men in a clinical trial. “It is imperative that Black men be included in the study to ensure results are representative and applicable to all patients.” Luo hopes to expand this work to focus on early detection of aggressive prostate cancer in Black men through large-scale use of a urine test.

Maynard and Elana Fertig, Ph.D., compared prostate tumors from Black men with those of White men and found some key differences in the expression of immune cells and AR-related genes. “Our initial data allowed for a new collaboration with Isla Garraway, M.D., Ph.D., Director of Urologic Research at UCLA,” to study other data available through the Veterans Administration system. Then, with Hopkins pathologist Angelo de Marzo, M.D., Ph.D., a study of metastatic prostate cancer tissue found that Black men had “more frequent AR loss, and that this affected innate immune cell expression, the body’s first line of defense in fighting off enemy cells.”