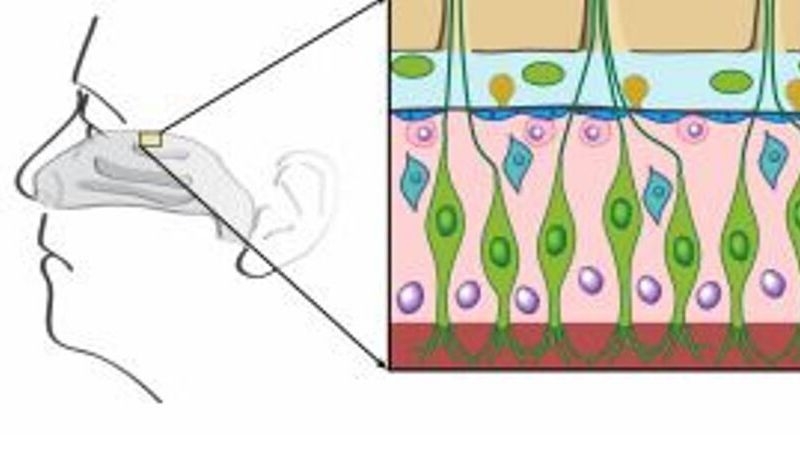 An illustration of horizontal basal cells and nearby neurons. Credit: Andrew Lane

In experiments with mice and human tissue samples, Johns Hopkins Medicine researchers report evidence that neuronal stem cells in the part of the nose responsible for the sense of smell transform themselves to perpetuate the long-term inflammation in chronic sinusitis. Results of the study, they say, suggest that the stem cells’ ability to switch their identity to join in the immune response may serve as a protective mechanism, while preserving the potential to regenerate the sense of smell tissue once the inflammation resolves.

In a report, which appears online Sept. 12 in the journal Cell Stem Cell, the scientists say the research also may advance the search for better treatments for the loss of smell that often accompanies chronic sinusitis.

For many, mucus and tissue swelling blockage alone can’t explain why they lose their smell sense. “Losing this sense is a real disability,” says Andrew Lane, M.D., professor of otolaryngology–head and neck surgery at the Johns Hopkins University School of Medicine. “People can’t detect smells that warn them of impending danger, such as smoke, gas leaks or rotten food. Since most of the perceived flavor of food comes from smell, they lose their ability to taste, affecting their overall enjoyment of life.”

Lane, an otolaryngologist whose practice focuses on treating people with sinus problems, says standard treatments with steroid pills to reduce inflammation don’t always work, and come with side effects, such as bone weakness, change in vision, weight gain and vulnerability to infections. Topical steroids in nasal sprays and rinses can improve sinus congestion and other symptoms, he says, but frequently do not restore the sense of smell.

Neurons in the mucous membrane lining responsible for the sense of smell are called olfactory neurons, and they normally have a remarkable capacity for regeneration, says Lane, even when they are severely damaged by injury. However, in previous studies of a mouse model created by Lane and Johns Hopkins molecular biologist Randall Reed, Ph.D., they found that olfactory neurons damaged by chronic sinus and nasal inflammation fail to regenerate from olfactory stem cells known as horizontal basal cells.

There’s a stem cell in your nose that can switch identities to potentially serve as a protective mechanism. Click to Tweet

They sampled olfactory tissue from the mice early in the experiment, before extensive inflammation set in, and again six to eight weeks later.

The scientists sorted the cells in the olfactory tissue using a specific marker to isolate the olfactory horizontal basal cells. They found that late in inflammation, the basal cells became enlarged and increased in numbers, but shut down their regeneration capacity, meaning the basal cells did not form new neurons. After sequencing the cells’ RNA, a genetic cousin to DNA and a measure of genetic output, the scientists discovered that the basal cells in the later stages of inflammation had undergone a transformation. They switched from having a preponderance of genes making proteins involved in dividing and becoming olfactory cells to doubling the expression of genes that make proteins involved in inflammation, including cytokines, which help immune cells communicate, and certain types of signaling proteins called chemokines, which attract immune cells known as macrophages and activate them.

In olfactory tissue samples from people with chronic sinusitis, the scientists found that basal cells increased in number and size and produced inflammatory cytokines, similar to the mouse model.

“What we have learned is that stem cells are not just passive receivers of signals instructing them to regenerate new neurons, but actually switch their identity to participate in the immune response,” says Lane. “Our studies also show that as long as the inflammation persists, these cells stay in a stem cell state and don’t revert to regenerating olfactory neurons.”

One possible evolutionary explanation for not switching back, Lane says, is its critical protective function. “The real estate that these cells occupy so near to the brain is an important place to defend,” says Lane. “The body doesn’t want an infection or whatever else may be causing inflammation in the nearby sinuses to penetrate into the brain itself. So, rather than only serving to create more olfactory cells, it’s likely these basal cells evolved to participate in the immune response as a last line of defense.”

Lane says it’s possible that chronic inflammation in other organs and parts of the body may prompt other adult stem cells to switch identities, slowing the renewal of tissue function.

A deeper understanding of how inflammation affects olfactory tissue and loss of smell-sensing neurons should help in the discovery of non-steroidal treatments that restore the sense of smell in people with chronic sinusitis, says Lane.

In addition to developing new drugs that protect neurons from injury or allow them to regenerate despite inflammation, the research may also help scientists understand why new treatments for inflammation currently on the market, such as dupilimab, which blocks protein pathways involved in asthma and sinus polyps, can restore the sense of smell in people with these conditions.