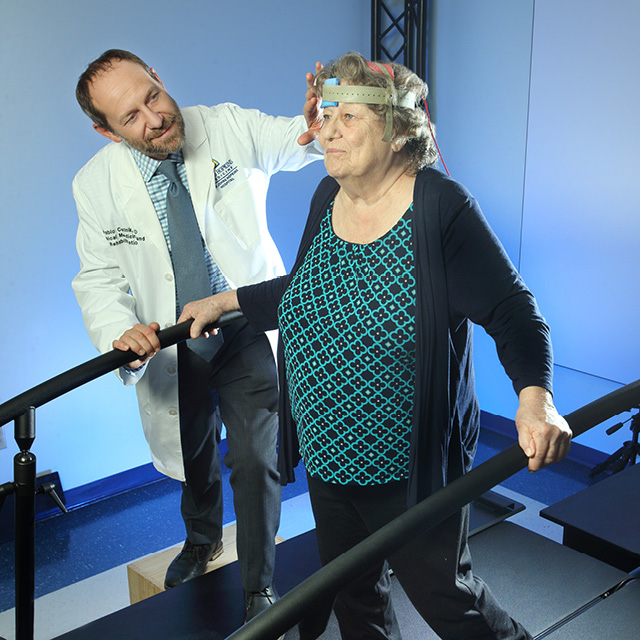 For more than two decades, physician-scientist Pablo Celnik has studied how people acquire new motor abilities and what makes those abilities stick around. To this end, he’s used noninvasive brain stimulation techniques including transcranial direct current stimulation (tDCS) and transcranial magnetic stimulation (TMS). Because he found that applying stimulation enhances the ability to acquire new motor skills, retain them longer and improve function in neurological patients, he opened a comprehensive Noninvasive Brain Stimulation Program geared to enhance the effects of rehabilitation—the only one of its kind in the U.S. and one of few in the world that offer this kind of intervention.

“We’re continuing our research in this area, but our ultimate goal has always been to help patients,” says Celnik, who also directs the Johns Hopkins Department of Physical Medicine and Rehabilitation and the Center of Excellence in Stroke Treatment, Recovery and Rehabilitation.

Celnik’s body of work includes the first study that demonstrated patients with stroke can perform motor actions better under the effects of tDCS, as well as a landmark study, published in PNAS in 2009, which showed that healthy volunteers remembered a newly learned motor task better and with more accuracy if they received tDCS while learning it, compared with those who didn’t receive this stimulation. Additional studies by Celnik’s group and others have suggested that the effects are mediated by modulation of neurons with receptors for the inhibitory neurotransmitter gamma-aminobutyric acid (GABA) as well as long-term potentiation-related changes, although the exact mechanism remains unclear.

The Noninvasive Brain Stimulation Program is aimed at patients who have motor, language, cognitive and other deficits stemming from brain injuries and disorders, such as stroke, traumatic brain injury and Parkinson’s disease.

Patients who qualify participate in a pilot that involves three weeks of either tDCS or TMS, depending on the type of neurological condition, combined with high-intensity physical or occupational therapy or speech-language therapy. This combination approach of brain stimulation and high intensity rehabilitation represents a unique program and a marked difference from the low-intensity therapy that’s typically offered as a standard of care for these conditions.

Although the stimulation is applied for just a brief part of each session, Celnik adds, his and other research shows the modulation of brain plasticity lingers for at least an hour and a half. A significant number of patients have shown substantial improvement from this program. For the small remainder of patients who don’t improve over the three-week pilot, Celnik typically recommends continuing with standard therapies.

Celnik says he’s seen some patients go from having significant difficulty walking to using a cane or no assistance at all; patients who’ve had trouble with manual dexterity and balance can stand and dress themselves.

“It’s so rewarding to be able to put the science and knowledge we’ve been gathering over the years to practical use in patients,” says Celnik, “but it feels even greater to see people improve.”

Physiatrist Pablo Celnik and his team study how people can better recover the ability to move following a stroke and other brain diseases.