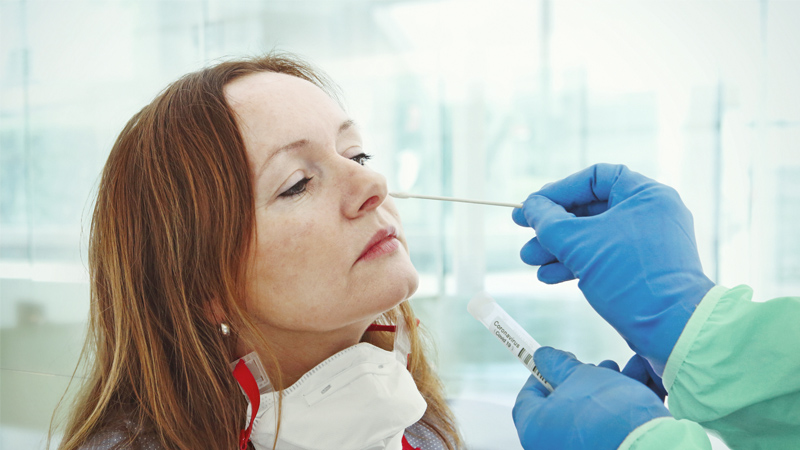 Scientists at Johns Hopkins Medicine, experimenting with a small number of human cell samples, report that the “hook” of cells used by SARS-CoV-2 to latch onto and infect cells is up to 700 times more prevalent in the olfactory supporting cells lining the inside of the upper part of the nose than in the lining cells of the rest of the nose and windpipe that leads to the lungs. These supporting cells are necessary for the function/development of odor-sensing cells.

The findings, from a preliminary study of cells lining both the nose and trachea, could advance the search for the best target for topical or local antiviral drugs to treat COVID-19, and offers further clues into why people with the virus sometimes lose their sense of smell. 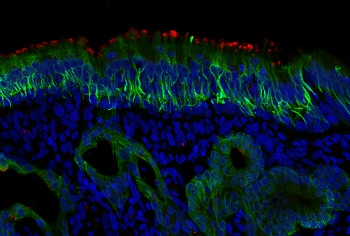 Red stain is ACE2. The green probe is staining CK18, which is found in supporting cells and mucus glands. Credit: Photo by Mengfei Chen

A summary of the findings appears in a letter published Aug. 19 in the European Respiratory Journal.

“Loss of the sense of smell is associated with COVID-19, generally in the absence of other nasal symptoms, and our research may advance the search for a definitive reason for how and why that happens, and where we might best direct some treatments,” says Andrew Lane, M.D., professor of otolaryngology–head and neck surgery, and director of the Division of Rhinology and Skull Base Surgery at the Johns Hopkins University School of Medicine.

Lane’s medical practice focuses on people with nasal and sinus problems, who oftentimes, he says, lose their sense of smell — a condition called anosmia.

Scientists have known that SARS-CoV-2 latches on to a biological hook on the surface of many types of human cells, called an angiotensin-converting enzyme 2 receptor (ACE2). The receptor reels in essential molecules.

In a bid to explore the ACE2 link to COVID-19 in more detail, Lane, Mengfei Chen, Ph.D., a research associate in Lane’s lab at the Johns Hopkins University School of Medicine, and others on his team took a close look at ACE2 levels in nasal tissue specimens from 19 adult men and women with chronic rhinosinusitis (inflammation of nasal tissue) and in tissues from a control group of four people who had nasal surgeries for issues other than sinusitis.

The researchers also studied tissue samples of the trachea from seven people who underwent surgery for abnormal narrowing of the trachea.

Cells from children were not examined for this study, in part because they tend to have low ACE2 levels in the cells lining the nose, which may contribute to generally less severe illness among children infected with the SARS-CoV-2 virus. None of the study participants had been diagnosed with COVID-19.

Where does SARS-CoV2 enter the body? A study adds to evidence that it could be through odor-sensing cells in the nose. Click to Tweet

They found high levels of ACE2 among nasal cells that give structural support called sustentacular cells. These cells are located in an area called the olfactory neuroepithelium, where odor-sensing neurons are found. The researchers say this area of the nose may be particularly vulnerable to infection and might be the only infected site even when there are no symptoms. Because of this, they urge people to wear masks and wear them correctly.

For the study, depending on the biopsy sample, cells in the olfactory neuroepithelium had a 200-fold to 700-fold increase in ACE 2 proteins compared with other samples from the nose and trachea. Because the cells with high levels of ACE2 are associated with odor sensing, the researchers suggest that infection of these cells may be the reason some people with COVID-19 experience loss of smell.

Two of seven trachea specimens had low levels of ACE2 receptors, and the amount of those receptors was similar between study participants with and without chronic rhinosinusitus.

Because the cells lining the nose may prove to be a key entry point for SARS-CoV-2, Lane says there may be ways to target those particular cells with topical antiviral drugs or other therapies directly to that area.