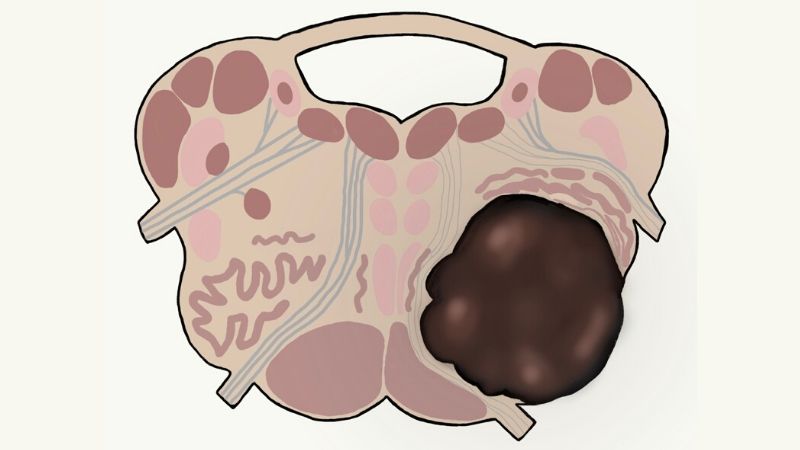 For adult patients with brainstem high-grade gliomas — one of the rarest and deadliest forms of brain cancer — surgically removing the entire tumor may add many months or potentially years of survival beyond that offered by radiation and chemotherapy, according to results of a medical records study led by researchers at the Johns Hopkins Kimmel Cancer Center.

The investigators point out that survival for these tumors has remained poor, with a median survival length of eight months after diagnosis in people who only receive a biopsy. However, if total surgical removal is an option for patients, the data in the records studied suggest it could boost this number to a median of 16 months or more.

“Knowing what these surgeries can do could help neurosurgeons, neuro-oncologists and patients have a better sense of what to expect so we can move forward toward better standardized care for these rare and critical tumors,” says study leader Debraj Mukherjee, M.D., M.P.H., assistant professor of neurosurgery at the Johns Hopkins University School of Medicine and a member of the Johns Hopkins Kimmel Cancer Center.

The findings were reported online Oct. 16 in the Journal of Neuro-Oncology.

Every year, about 10,000 patients in the U.S. are diagnosed with high-grade gliomas, aggressive cancers that arise from a brain cell type called glia, which form the “scaffolding” of the organ. Only a small fraction of these cancers form in the brainstem, a core structure critical for nearly all functions necessary for life, such as heart rate, breathing and consciousness.

Because of the vital nature of this region, brainstem high-grade gliomas have traditionally been treated only by chemotherapy and radiation. However, in recent years, Johns Hopkins and several other academic medical centers around the world have been able to safely access tumors through so-called “brainstem safe entry zones,” making surgery possible for previously inoperable tumors.

Consequently, a growing number of patients have opted for partial or total removal of their tumors, according to the researchers. But because gliomas are rare, and the availability of surgical treatment relatively recent, it has been difficult to compare treatments, and unclear what kind of survival benefit surgery confers.

To find out, Mukherjee, along with Johns Hopkins Kimmel Cancer Center postdoctoral fellow Adham M. Khalafallah, M.D., M.B.B.Ch., and their colleagues used data from the National Cancer Institute’s Surveillance, Epidemiology, and End Result (SEER) database, an extensive collection of information on cancer patients gleaned from registries in 19 geographic regions that cover about 35% of the U.S. population. A search of this database, covering a time span from 1973 to 2015, turned up 103 patients with brainstem high-grade gliomas who underwent either a biopsy (15%) or some surgical intervention (85%) for their tumors. Of those who had surgery, about 19% underwent total surgical removal.

Beyond information on interventions, SEER records included a wealth of other data on these patients, including age, race, marital status, size of their tumor, how far it had spread, if postoperative radiation treatment was done and length of survival after diagnosis.

In the future, Mukherjee adds, it might be possible to boost survival even further by identifying biomarkers that could help personalize which treatments might benefit patients most.

Other Johns Hopkins researchers who participated in this study include Joshua Doyle, Wuyang Yang, Yi Sun and Chetan Bettegowda.