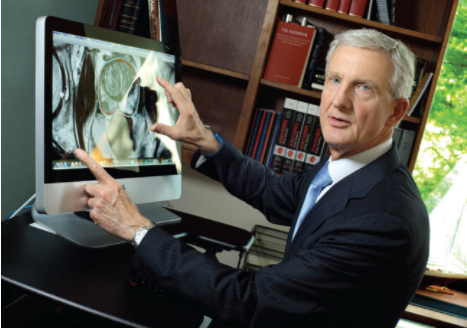 For years, the biggest frustration with the prostate biopsy has been that it is "blind." That is, although they are guided by ultrasound, urologists doing a biopsy really can’t see whether one area of the prostate looks any different from another — so they do the best they can by trying to sample tissue in a systematic way throughout the gland. The problem with this approach, says urologist H. Ballentine Carter, M.D., the Bernard L. Schwartz Distinguished Professor of Urologic Oncology, is that "we often miss significant prostate cancers. About half of men require a repeat biopsy within five years because of concerns that cancer is hiding there and was simply missed."

mpMRI-guided biopsy uses three different ways of looking at prostate tissue to help determine the presence of cancer, says Carter. "One is the tissue signal intensity upon exposure to a strong magnet. Another is how well water diffuses through the tissues; and the third is how well the contrast material is taken up, and how quickly it washes out of the tissues." These three parameters are important, he explains, because "compared to normal tissue, prostate cancer is associated with low signal intensity, low water diffusion, and earlier contrast enhancement with faster washout of contrast."

At Johns Hopkins, radiologists use a grading system (the Prostate Imaging Reporting and Data Systems, or PIRADS) from 1-5 based on results of the mpMRI to indicate the likelihood that cancer is present. Grade 1-2 means a low suspicion of cancer; grade 3, right in the middle, is "indeterminate suspicion," and grade 4-5 suggests a high suspicion.

The mpMRI lays the groundwork for the biopsy. "During the biopsy, which is done with ultrasound guidance, we overlay the MRI image and the ultrasound image, fusing them together to directly target abnormal regions seen on mpMRI," says Carter.

Carter and colleagues recently looked at the capability of targeted biopsy vs. traditional biopsy in three groups: men with elevated PSA levels who had never had a biopsy; men newly diagnosed with prostate cancer who met criteria for active surveillance and were undergoing a second biopsy to make sure their disease was low-grade, slow-growing and safe enough not to be immediately treated; and men already enrolled in active surveillance who were undergoing routine follow-up biopsies. Their study was published in the May 2016 issue of European Urology. The results were most striking in the first group of men — those who had never undergone a biopsy before. Targeted biopsy identified higher-grade cancers in 16 percent of these men — cancers that standard biopsy missed.

In the second and third groups, "targeted biopsy identified high-grade disease that had been missed by systematic biopsy in only 4 to 5 percent of individuals," Carter reports. "Therefore, we believe that image-guided biopsy provides useful information over and above regular biopsy for men with an elevated PSA, but not necessarily for those who meet strict criteria for active surveillance. However, image-guided biopsies could help expand the pool of individuals for whom surveillance would be safe." And further good news for men on active surveillance: "Among men who had no PIRADS 3 or higher lesion, there was a 90-percent likelihood of finding no cancer of Gleason score above 6 on biopsy. For those men, frequent biopsies to monitor their cancer while on surveillance may be unnecessary."