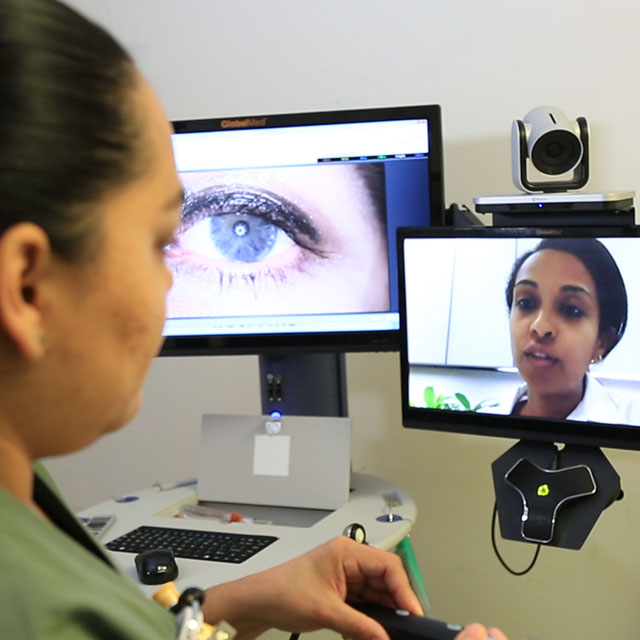 The Department of Emergency Medicine at The Johns Hopkins Hospital had a problem: In the early hours of the morning, between midnight and 3 a.m., when fewer triage personnel were available, as many as 25 percent of patients got tired of waiting and left before being seen.

To save the expense of hiring more staff, the department invested in telemedicine equipment. Since last April, patients with less urgent needs have been taken by a certified nursing assistant to an exam room that has a telemedicine cart. Using a handheld camera, the certified nursing assistant zooms in on wounds and peers into eyes, ears and throats, while a physician, via video conference, interacts with the patient and forms a treatment plan. More than 6,400 patients have been evaluated this way since the program started, says Cole — it’s been so successful that within four months, the walk-out rate plummeted to 4.5 percent.

An additional 24 projects so far are planned to ramp up in the next year, Canino says, including a video visit that will allow several specialty physicians to meet with a patient at the same time and coordinate treatment.

Telemedicine has also been instrumental in addressing population health challenges, according to Steven Snelgrove, president of Howard County General Hospital, who shared examples of how his hospital is using telemedicine to form closer ties in the community. “How many people like getting that call that your child is in the nurse’s office?” he asks. “We partnered with six Title I elementa­ry schools and connected them through telemedicine to our emergency depart­ment physicians. We’ve been able to keep 96.8 percent of our children back in the school system so parents don’t have to come pick them up.”

What is Johns Hopkins doing that makes telemedicine more innovative than at other institutions? Johns Hopkins is embedding telemedicine directly into its operations, says Canino. “We’re not bringing in third party vendors or paying extra costs,” she says. “With the help of our experts, we’re building it into Epic to create a smooth continuum of care. We’re all looking at the same record, and this is huge when you look at the safety portion of telemedicine, which puts us head and shoulders above everyone else.”

The telemedicine office also is looking to incorporate the registration and copayment process within MyChart so patients could check in from home. Like during in-person visits, all telemedicine documentation is done through Epic, the electronic medical record.

Telemedicine appointments not only save patients the time and travel fees associated with in-person visits, Canino says, but also are more likely to start and end on time. Overall, patients and physicians like them, adds ophthalmologist Ingrid Zimmer-Galler, executive clinical director of the Office of Telemedicine: “We use the internet to order our coffee, say hello to our friends and hold meetings, so why not see your physician online?”

Watch Johns Hopkins Telemedicine: Connecting Patients to Exceptional Virtual Care to learn about remote care programs and meet some of the patients who are benefiting from them.