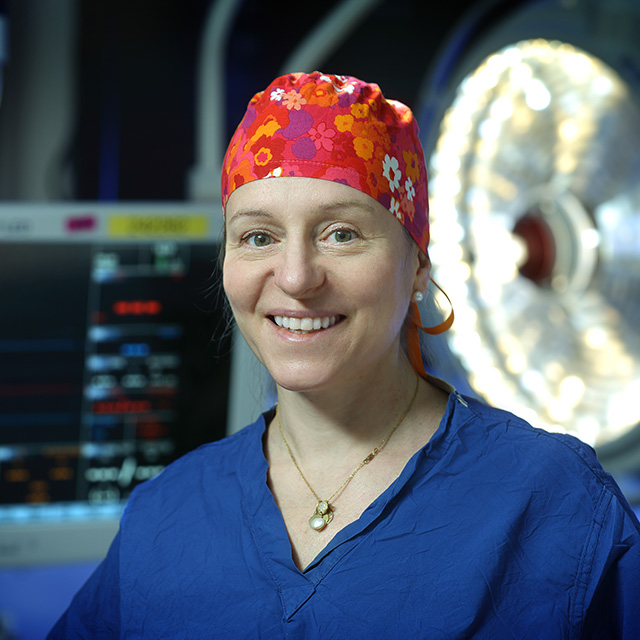 "I wanted to help patients at the beginning of life. The risks are high but the rewards are great." —Danielle Gottlieb Sen, M.D., M.P.H., M.S.

Early on, there was no lack of interest stimulating possible career choices in medicine for Daniele Gottlieb Sen. The maternal-fetal interaction fascinated her, so much so that she put midwife on the table, then obstetrics. Next, influenced by her father, an oncologist, she thought about family medicine and working in different parts of the world. As part of the master’s/doctor of medicine program at the University of California San Francisco, she traveled to Zimbabwe during the height of the AIDS epidemic in the mid-1990s. That experience prompted another vision.

“When I came back I said, ‘Just let me fix something,’” says Gottlieb Sen. “That’s when I decided I wanted to be a surgeon.”

After landing a surgical resident spot at Massachusetts General Hospital, the question was: What kind of surgeon? During laparoscopic training, she found herself fixated on the diaphragm, which was as far as she could go with a scope.

“I was always looking up at the diaphragm,” she says, like there was something just beyond it, like the beating muscular organ that was virtually sitting on it. “I made this very real inference based on my interest in maternal fetal biology and surgery. I became interested in congenital heart surgery.”

She immediately explored research opportunities in congenital heart disease, and made her way over to Boston Children’s Hospital. Gottlieb Sen was “lucky,” she says, to be accepted by a lab where she would spend the next four years developing animal models to study the growth of tissue-engineered pulmonary valves. A value-added was mentoring by Boston Children’s heart surgeons.

Hooked, she then entered fellowships in cardiac surgery and congenital heart disease. Another influence — Frank Oski, a family friend from Syracuse, New York, and a pediatric hematologist who would go on to direct Johns Hopkins Children’s Center — steered her toward pediatric cardiac surgery. Why?

“I wanted to help patients at the beginning of life,” says Gottlieb Sen. “The risks are high but the rewards are great.”

While women physicians are rare in surgery and even rarer in cardiothoracic surgery, a subspecialty that is only 6% women, Gottlieb Sen did not see gender as a risk. “I continued on a path I was committed to,” she says.

Indeed, she sharpened her focus further on the genetics of congenital heart defects (CHD), which she says is a very small area nationally for research. Next, she joined a collaboration with biomedical engineers to develop new devices applicable to the clinical needs of pediatric patients with CHD. While such devices exist for millions of adults with cardiac disease, diabetes and hypertension, children are a much smaller market.

“We are challenged by the real estate of the child. It really comes from the clinical imitations that we have that I am drawn to doing that kind of work,” Gottlieb Sen says, noting that bioinnovation and development of devices that may grow with children offer solutions.

Cardiac growth of a child with CHD is another important factor affecting outcomes, especially after corrective surgery, says Gottlieb Sen, who is looking into markers of adequate nutritional intake in infants and children. Through her own intensive growth, Gottlieb Sen has found her way to Johns Hopkins Children’s Center as a newly recruited member of the Blalock-Taussig-Thomas Pediatric and Congenital Heart Center.