The Great Promise of PSMA-Targeting Agents 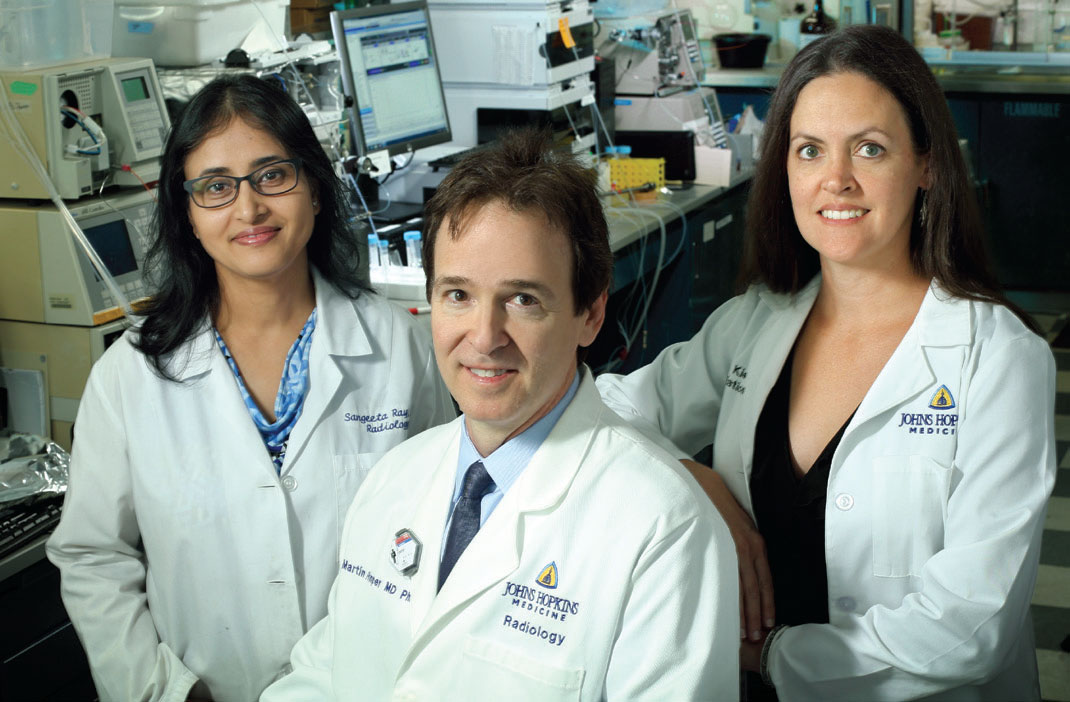 Pomper, with Sangeeta Ray, left, and Ana Kiess: This marks “a pivot by our group from developing imaging agents to finding better agents for therapy.”

It’s a tiny version of a heat-seaking missile – except the target locked onto by this particular missile is PSMA (prostatespecific membrane antigen), which sits on the surface of prostate cancer cells. The weapon itself is a small molecule, originally designed as a PSMA-based imaging agent by a team led by Martin Pomper, M.D., Ph.D., and scientists are still discovering what it can do. When linked to a radioactive dye, it can show on a PET scan where small bits of cancer are hiding, and when paired with a radiopharmaceutical agent, it can kill those pockets of cancer and potentially even stop metastatic disease.

“We started working on PSMA-based imaging agents back in the late 1990s,” says Pomper, the Henry N. Wagner, Jr., Professor and Director of the Division of Nuclear Medicine and Molecular Imaging. Pomper’s team was not the first to try to harness PSMA as a way to get to prostate cancer; in 1996, scientists linked an antibody to PSMA and used SPECT imaging to see hidden prostate cancer cells. But success was limited. Antibodies are cumbersome; it takes several days from the time they are administered until they clear the bloodstream and reach the target cells. “We prefer not to use antibodies,” Pomper explains. “We want to be able to scan within an hour or so after injection. We prefer the small molecules for therapy, too, and this is where the field seems to be moving.”

Pomper should know; his versatile small molecule has galvanized the field of nuclear medicine. This molecule and its derivatives have generated huge interest worldwide – especially in Europe, where scientists have linked the small molecule to alpha- and beta-emitting particles and are reporting long-term remissions in some men with metastatic prostate cancer. Think of molecular LEGOS: “You just switch what’s attached to the small molecule, and you can go from imaging to irradiating the cancer – cancer you can’t even see, potentially. This would be impossible using external-beam radiation.”

German scientists, who were able to move right into using PSMA-targeted radiotherapy without the painstaking clinical trials required in the U.S., have even reported cures in a few men – but also some side effects, including the loss of the salivary gland, where some PSMA-bearing cells also live. That’s because, although scientists called it “prostate-specific,” PSMA is not solely confined to prostate cancer.

“PSMA is present in the normal prostate, present in the brain, the kidney and the intestines,” Pomper notes, “but it’s really expressed much higher in malignant prostate tissue. It’s also expressed in the neovasculature – the vessels tumors need in order to grow in place or metastasize.” PSMA is present in many different cancers, too. “Renal cell carcinoma, glioblastoma, pancreas cancer and other cancers have PSMA in the blood vessels around them – not in the tumor itself,” and this is an exciting potential avenue for future research: finding a way to target and kill PSMA-bearing areas around some terrible cancers that desperately need effective treatment.

Pomper keeps tinkering with the molecule and agents that link to it. Recent work with colleagues in Radiology and Radiation Oncology has led to the first published small-molecule alpha-particle emitting agent to treat prostate cancer. “Alpha particles are emitted from certain molecules as a consequence of radioactive decay,” he explains. “They are useful for treating cancer because they provide a lethal punch to the DNA of malignant cells – more so than other forms of radiation. The key is to enable the alpha emitter to reach the cancer cells selectively, leaving normal tissues unharmed.”

A team led by radiation oncologist Ana Kiess, M.D., Ph.D., linked an alpha-particle emitter to Pomper’s small molecule. “Using this agent, we were able to prolong the lives of immunocompromised mice bearing human prostate tumors,” says Pomper. This study lays the groundwork for future clinical trials in men with prostate cancer, and for the design of even safer, next-generation alpha particle agents. Also, it “represents a pivot by our group from developing imaging agents to finding better agents for therapy.” In a few months, the group will be leading a phase I clinical trial for beta particle-emitting agents it has developed.

This work was published in the Journal of Nuclear Medicine and won the Editor’s Choice Award. In recognition of his research on PSMA-targeting agents, Pomper also has received the Paul C. Aebersold Award for 2017 from the Society of Nuclear Medicine for “outstanding achievement in basic science applied to nuclear medicine.”