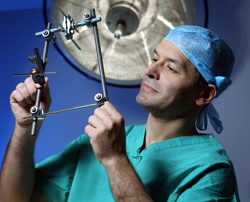 When Erik Hasenboehler sees a patient with a complex fracture involving 10 to 20 fracture segments in an area, his first thought is not about the exact approach he will use to repair the injury. He initially thinks about the optimum time he should wait before repairing the injury.

As the primary orthopaedic traumatologist at Johns Hopkins Bayview Medical Center, Hasenboehler specializes in complex fracture repair in the upper and lower extremities. Planning the proper surgical approach for such extensive injuries, he says, involves studying the fracture pattern, and that can take some time.

But the main reason for waiting is to allow the body to relax. “The amount of soft-tissue swelling goes down, which decreases the morbidity and the infection risk after surgery,” says Hasenboehler.

Complicated fracture repair and reconstruction involves contemplating not only the right time and approach but also each particular incision, the specific implant, and the potential need for more than one operation.

For example, when Hasenboehler plans to repair a pilon fracture in the tibia and fibula near the ankle, he waits between 14 and 20 days after the injury occurred. Then, he says, “open reduction through an incision allows us to visualize the fracture, reduce it with clamps and wires, and then put the pieces back together.”

Typically, a pilon injury requires multiple approaches with several plates and screws at multiple levels. Each step is deliberately chosen because if it’s not done perfectly, he says, the repair will cause more harm, and he will have to repeat the process.

For another complex fracture — a tibial plateau fracture involving the knee — Hasenboehler waits 10 to 14 days for the swelling to decrease. For the repair, he chooses from various possible approaches to combine with an internal fixator for the tibia. The incisions are made on the inside and outside of the knee.

When an implant is required, Hasenboehler knows all the options. “There are so many available,” he says, “but one is usually better than another for a particular type of injury.”

If he doesn’t want to use internal hardware because of the possibility of an infection, Hasenboehler chooses a multiplanar external fixator to definitively treat the injury, since this keeps all the hardware on the outside of the body.

Patients come to the orthopaedic traumatologist from hospitals across the region for complex fracture care and remain in his care until they are healed. The process usually takes six to nine months or even longer if the patient needs multiple surgeries.