The Protein that Makes Metastasis Possible 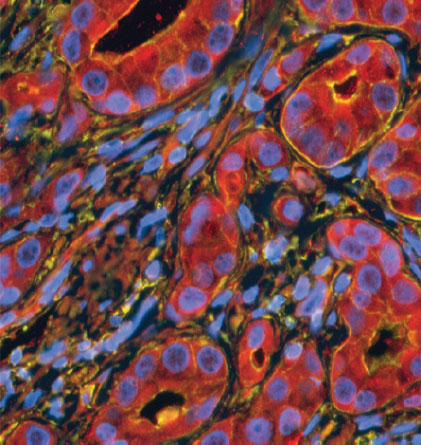 Like ghosts, cancer cells can move through walls. They do it by morphing into stretchy, flexible new shapes. Previously in Discovery, we reported on this important finding by scientists Michael Haffner, M.D., Ph.D., Srinivasan Yegnasubramanian, M.D., Ph.D., Steven An, Ph.D., and colleagues from the Brady, the Sidney Kimmel Comprehensive Cancer Center and the Bloomberg School of Public Health.

The mystery of metastasis – how cancer cells, Houdini-like, somehow squeeze themselves out of their home environment and into new tissue and bone – has long baffled scientists. With support from the Patrick C. Walsh Prostate Cancer Research Fund and the David H. Koch Foundation, Haffner, Yegnasubramanian, An and colleagues identified a protein that “controls cell migration, invasion and metastasis formation in prostate cancer,” says Haffner. This protein, called AIM1, also might open up entirely new avenues for treating advanced cancer. Their discovery was recently published in Nature Communications.

AIM1, “binds and modulates the major component of the cytoskeleton in normal prostate epithelial cells,” Yegnasubramanian adds. In invasive primary prostate cancer, they found, AIM1 seems to have an out-ofbody experience, separating itself – think of a soft-shell crab, or a cicada shedding its skin – from the cancer cell’s cytoskeleton. “We also found that AIM1 was often deleted or reduced in expression in metastatic prostate cancer.” In laboratory models, when the scientists cut the expression of AIM1, cancer cells began to remodel themselves, and “this increased their invasive and migratory potential. Taken together, these findings implicate the loss of AIM1 function in conferring prostate cancer cells with the ability to invade and produce invasive cancer and metastases.”

If the team can crack the molecular code – the nuts and bolts mechanisms behind the shape-shifting – it may one day be possible to block them, and to prevent or halt prostate cancer metastases.