The PSMA-Targeting Era: A Game-Changer for Men with Prostate Cancer Worldwide

PSMA is tiny; you couldn’t see it if you tried with the naked eye. It’s just a protein, one of about 2 million in the human body. So why are doctors and patients so excited about it?

Because of the company it keeps: PSMA (prostate- specific membrane antigen) lives in high concentrations on the surface of most prostate cancer cells, especially those with the highest lethal potential.

For the last nearly three decades, scientific pioneers including Martin G. Pomper, M.D., Ph.D., Director of Nuclear Medicine and Molecular Imaging and Professor of Radiology and Radiological Science, have been working on ways to use PSMA as a homing beacon for prostate cancer – particularly, for cancer that has left the prostate but is still too small to be seen by conventional imaging: CT, MRI, or bone scan.

In 2021, the FDA approved PSMA-PET imaging, in which a radioactive tracer that shows up in a PET scan is molecularly engineered to find one very specific target: PSMA. Because the tracer is injected systemically, it can shine a virtual spotlight on whatever it tags – even tiny bits of prostate cancer as small as a grain of rice – anywhere in the body. Several of these tracers have been studied. One, called 68Ga-PSMA-11, received FDA- approval for limited use at two hospitals in California: UCLA and UCSF. Another agent called PYLARIFY, (18F-DCFPyL, known as PyL), developed at Johns Hopkins by a team led by Pomper, is the latest to receive FDA approval and is much more widely available.

Pyl has proven itself in two important clinical trials: CONDOR, published in Clinical Cancer Research, and OSPREY, which was published in the Journal of Urology. In the OSPREY trial, PyL PET/ CT was tested in men diagnosed with high-risk, locally advanced prostate cancer who were set to undergo radical prostatectomy with pelvic lymphadenectomy, and in men with metastatic or recurrent cancer. In the first group, the ability of PyL to detect metastases in the pelvic lymph nodes or beyond was determined, and in the second group, PyL was used to detect distant metastases. In both groups, it demonstrated excellent accuracy in detecting cancer with high specificity. 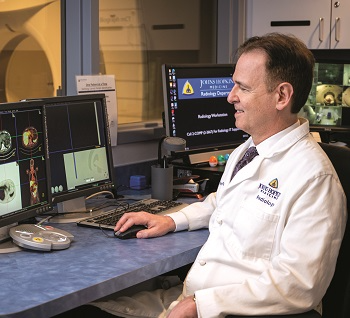 Pomper: “We’re seeing exciting offshoots of our work in other forms of cancer, as well.”

In the CONDOR study, men with a rising PSA after treatment for prostate cancer with surgery, radiation, or cryotherapy, who had no visible cancer on standard imaging, were scanned with PyL PET/CT, which accomplished what researchers hoped it would: “PyL successfully localized sites of disease in 85 percent of men with biochemical recurrence,” says Pomper, “even men with low PSA levels.” It detected disease in most men with biochemical recurrence presenting with negative or equivocal conventional imaging, and led to changes in management in the majority of patients.

“I’ve had patients for years asking me when we are going to be able to use this,” Pomper adds. “It’s proven very difficult, and taken a long time, but we are finally there.”

In 1996, Pomper was the first to figure out how to engineer a small-molecule, harmless radioactive tracer to PSMA, and his team went on to test the first PSMA-targeted PET agent in a clinical trial. Then, with a pilot grant from the Patrick C. Walsh Prostate Cancer

Research Fund, he refined this into PyL, a more sensitive and specific agent that provides sharper images. “With standard imaging, we may suspect there is cancer outside the prostate area, but we often just can’t see it in its earliest stages. Standard imaging is not good enough for detecting and characterizing disease in men with biochemically recurrent prostate cancer, particularly in men with a low PSA (less than 2). But 95 percent of prostate cancer has PSMA.”

For men with a rising PSA after treatment, men at high risk of cancer recurrence, or some men with metastatic prostate cancer, PSMA-PET can help determine what to do next. Two very exciting trials at Hopkins led by radiation oncologist Phuoc Tran, M.D., Ph.D., have used PSMA-PET to guide stereotactic radiation therapy in men with oligo- metastasis – cancer that has not widely spread, but is in just a few isolated spots outside the prostate, with the idea that at this stage, cancer may still be curable.

A radioactive tracer, developed at Johns Hopkins with a pilot trial funded by the Patrick C. Walsh Prostate Cancer Research Fund, has become a game-changer for men with prostate cancer worldwide.

How is PyL different from 68Ga-PSMA-11? Both are very good. PyL produces slightly sharper images due to the physics of its positron decay,” Pomper notes, “but the main difference is that 68Ga-PSMA-11 requires special equipment to make, has a short half-life, and must be made in small batches on site in the hospital. PYLARIFY has a longer half-life, can be made in a factory and shipped ready to inject to any medical center able to perform PET imaging.” Although this is a radioactive compound, it is well-tolerated, he adds. “It has no pharmacological effect; it’s given in trace doses. It just binds to PSMA and goes away; it doesn’t do anything else to your body.”

PSMA-Targeting Can Kill Cancer, Too!

But wait! This is not all that PSMA- targeting can do! Think of molecular LEGOS: Instead of attaching the tracer molecule that can “see” prostate cancer, a different isotope (chemical brick) can be attached: one that can kill cancer. “With the same chemical scaffold serving as both a diagnostic and therapeutic agent, the field of theranostics has recently gained traction,” says Pomper. “Although I have been working on and off in this area for nearly 40 years, recent advances have really lit this form of treatment on fire.”

In Europe and Australia, and in international clinical trials, PSMA-targeting radionuclides such as 177Lu-PSMA-617, are being used to kill metastatic prostate cancer. “In Australia, 177Lu-PSMA-617 proved superior to cabazitaxel in terms of PSA response and lack of significant adverse effects when compared head-to- head in the TheraP trial,” says Pomper.

“We are working with Novartis on a similar agent, called 177Lu-PSMA-R2, which has even fewer side effects, including lack of uptake in salivary and lacrimal glands.

We are hoping that agents using this molecular scaffold will be able to be out- fitted with a variety of even more potent radionuclides than 177Lu. It is anticipated that 177Lu-PSMA-617 will be FDA approved at the end of this calendar year.”

What about the cancer cells that don’t make PSMA?

Pomper is developing new molecules and therapies to target “PSMA-invisible” forms of prostate cancer. “We are working on agents that work through different mechanisms and can complement the PSMA-targeted agents,” he says. “I believe that combining theranostics with immunotherapy, PARP inhibitors and other emerging agents – in addition to further optimization of dosage, dose rate and type of isotope of the PSMA-targeting agents – will be able to stave off progression of the disease for years, and that eventually, these patients will not die of their prostate cancer.”

There are even wider implications, too: “It took a long time, but now we’re seeing many exciting offshoots of our work in other forms of cancer, as well. Some pretty amazing things are happening.”