The (Remote) Eye Doctor Will See You Now 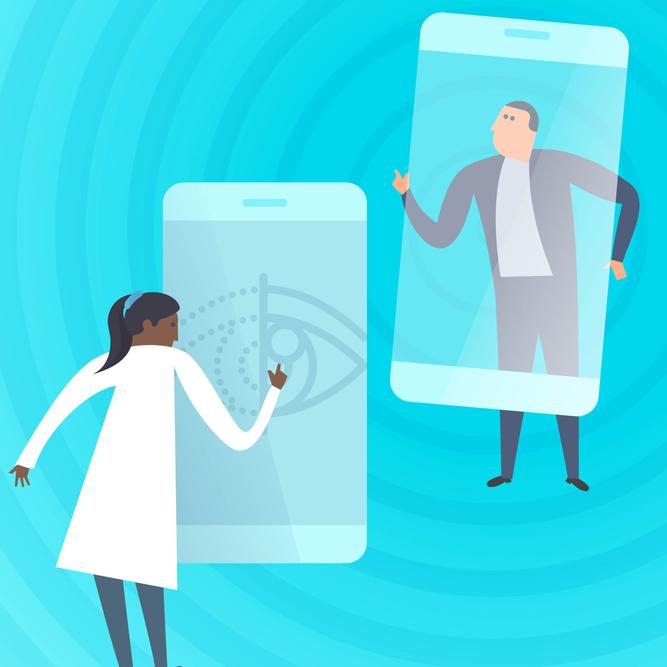 The patient arrives at the Emergency Department of Howard County General Hospital after splashing a chemical in her eye. Until recently, if she needed an ophthalmologist, she would have been sent—by ambulance if necessary—to The Johns Hopkins Hospital. Now, she remains in Columbia for a remote eye assessment from an ophthalmologist at home, Fasika Woreta.

“I was able to obtain a history and look at an external image of the eye in real time,” says Woreta, director of the Eye Trauma Center at the Wilmer Eye Institute at Johns Hopkins. “I determined that she did not need to be transferred in the middle of the night.”

The ophthalmology telemedicine program, launched in May by Johns Hopkins Telemedicine, connects Woreta to Howard County General Hospital emergency room clinicians and patients on weekends and evenings, when the hospital does not have a local ophthalmologist on call.

Woreta uses a telemedicine app that’s been installed on her laptop, while the physician assistant or a nurse connects through a computer linked to the Epic electronic medical records system, which is part of a portable telemedicine cart.

The cart has a high-definition autofocus camera affixed to an articulated arm, which delivers real-time streaming images of the eye on Woreta’s laptop and on the telemedicine cart’s screen. It also has a freeze frame feature that automatically chooses the clearest image.

Through the link, Woreta, the patient and the emergency physician can speak to and see each other. Woreta can ask questions and request new camera angles.

By the end of August, Woreta says, she had used the technology to assess eight patients. In each case she recommended outpatient follow-up instead of transfer to The Johns Hopkins Hospital, saving patients considerable time and stress and saving the health system the cost of a second emergency department visit.