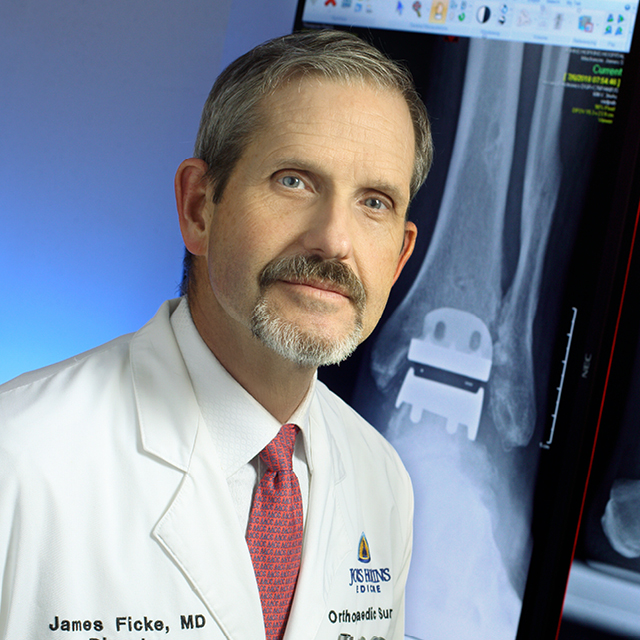 James Ficke says his interest in ankle treatments springs from his work with soldiers who suffered traumatic foot and ankle injuries.

The total ankle prosthesis recently approved by the Food and Drug Administration requires the resection of less bone than other systems now in use in the U.S. “This is an important development because if we do a total ankle replacement with a minimal cut and it fails, there are now other device options for use in revision, without needing to resort to fusion,” says James Ficke, professor of orthopaedic surgery at the Johns Hopkins University School of Medicine and director of the Department of Orthopaedic Surgery.

The survivorship of ankle prostheses is roughly 80 percent at eight years, compared with more than 95 percent at 10–15 years for hips and knees. “If you were a patient with ankle arthritis in that 20 percent who failed and you’re 50 years old, you were in a really tough spot because, until recently, there hasn’t been another good option,” says Ficke. “We really need to continue to challenge the designs and surgical techniques in order to improve the survivorship for total ankles.”

Although the typical treatment for late-stage osteoarthritis of the hip or knee is total replacement, that has not been the standard approach for the ankle. For decades, fusion has been considered the best option, although patients’ recovery can last several months and they must adjust to life with limited joint mobility.

A handful of orthopaedic surgeons in the U.S. are now using the device for total ankle replacement. The Johns Hopkins orthopaedic surgery team implanted its first one in April 2018 and are hopeful that the new device will mean more choices for patients.

The Johns Hopkins team was led by Ficke, who has no financial interest in the newly approved device or any other total ankle prostheses. The team will follow the outcomes of the patients and continue to seek improvements in function for those who suffer from arthritis after injury.

Ficke previously served for three decades in the U.S. Army, and says his interest in ankle treatments springs from his work with soldiers who suffered traumatic foot and ankle injuries.

“That really led me to my current work on post-traumatic arthritis,” he says. “While people don’t die from arthritis, it does create tremendous disability.”